U of C Wrestling Coach Regrets Letter of Support for Hastert 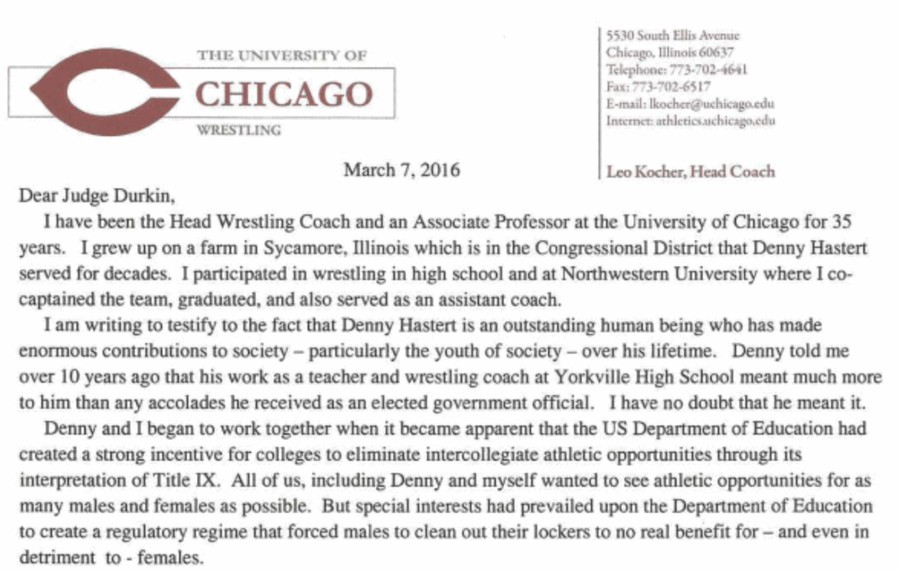 Leo Kocher wrote a letter on UChicago letterhead to the federal judge presiding over Hastert's case.

On Wednesday, a federal judge sentenced former Republican Speaker of the House Dennis Hastert to 15 months in prison for committing bank fraud to cover up sexual abuse. UChicago’s wrestling coach, Leo Kocher, knew Hastert and sent a letter to the judge urging him to give the former speaker a light sentence. Yesterday, Kocher said in an e-mail to The Maroon that he now regrets his decision to write the letter.

U.S. District Judge Thomas M. Durkin gave Hastert a 15-month prison sentence for paying $1.7 million in hush money to a victim to cover up an incident of sexual abuse perpetrated against a high school boy when Hastert was a wrestling coach over 30 years ago.

“Like many people I did not want to believe these allegations about someone whom I respected. In light of the recent confirmation of detailed allegations, I now deeply regret my decision seven weeks ago to submit this letter and to write it on University of Chicago Wrestling Program letterhead. I have only sympathy for the victims in this case,” Kocher said.

Kocher’s letter, which was made public by the judge last Friday, was drafted before a court filing on April 8 that detailed allegations by four individuals who said that Hastert sexually abused them as children. The allegations say that Hastert gave groin massages to the athletes and that he set up a chair to watch them shower. Hastert admitted to sexually abusing his athletes on Wednesday, and the judge said that he is a “serial child molester,” but the statutes of limitations on the sexual abuse allegations have long passed.

At the time of Kocher’s writing, federal law enforcement officials had said that Hastert paid one of the victims to cover up sexual abuse, and he had already been indicted for lying to the FBI about the reason why he circumvented bank regulations. Six months ago, Hastert pleaded guilty to evading bank rules to avoid requirements to report where the money was going. Investigators said at the time that the money was going to someone he had agreed to pay $3.5 million to keep quiet.

Kocher wrote in his March 7 letter that everyone who knew Hastert thought he was a “good man.”

“Dennis Hastert is an outstanding human being who has made enormous contributions to society—particularly the youth of society—over his lifetime,” reads the letter to the judge. “[He] is a good man—and is universally regarded as such by those who have gotten to know him. Please note that you can count on that as fact.”

Prior to joining the House of Representatives in 1981, Hastert taught social studies at Yorkville High School in Illinois, where he also coached football and wrestling. Kocher, who has coached wrestling at UChicago for 37 years, said in his letter that he started working with Hastert when the two decided that the Department of Education’s (DOE) interpretation of Title IX could threaten the existence of wrestling programs.

The DOE required academic institutions receiving federal funds to have proportional numbers of male and female student athletes. In some cases, compliance required schools to cut wrestling programs. In his letter to the judge, Kocher cited, as evidence of good character, Hastert’s fight against DOE enforcement of Title IX and his disregard for potential backlash.

Kocher has long been a critic of the effect of Title IX implementation on collegiate wrestling. In a 2012 interview with The Times of Northwest Indiana, Kocher said, “I don’t believe we need federal bureaucrats coming in with their agenda, which hurts male athletes. I trust local athletic directors and school boards and community leaders much more than I do the government.” In 2003, he helped plan a lawsuit claiming that Title IX implementation sexually discriminates against men, according to CBS News.

“The smart thing to do politically was to not touch this issue—no one benefits from being accused of being anti-female by the well-funded and media savvy feminist groups,” reads his letter to the judge. “But [Hastert] did whatever he could, whether it was prevailing upon the [DOE] to relent in its demands that a male college sports program be dropped (yes that did happen), or encourage a college president to find another way to satisfy the onerous demands of a [DOE] Bureaucracy that was bearing down hard.”

This isn’t the first time that Kocher has defended Hastert by citing his work to protect wrestling amid Title IX implementation. In 2006, when Hastert was under fire for not taking strong action toward investigating allegations that a Florida lawmaker had sent sexually suggestive messages to teenage boys, Kocher wrote a letter urging the wrestling community to call talk shows and write letters to the editor in his defense.

“Hastert has stepped up time and time again for wrestling. Now wrestling needs to step up for [him],” it reads. “He has been directly involved in saving or reinstating nearly a dozen college wrestling programs.… [Hastert] is a good and honorable man—and one of wrestling’s own. [Hastert] is now being unfairly and viciously smeared by the Foley sex scandal.”

University spokesperson Marielle Sainvilus said in an e-mail yesterday that Kocher’s letter, even though it was written on UChicago letterhead, does not represent the views of the University.

“UChicago Athletics is committed to upholding core principles of education, excellence and integrity, and helping students develop as athletes, teammates, and as citizens in the world,” she wrote. “Members of the University community express their individual views on a wide range of topics, and none of these are to be taken as positions of the University itself.”