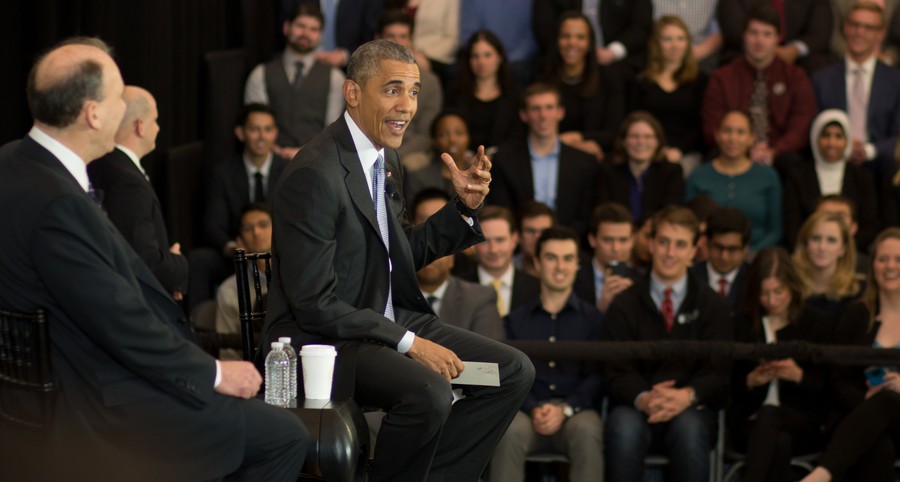 President Obama visited the Law School yesterday afternoon to discuss his nomination of Illinois native Judge Merrick Garland to the Supreme Court and the resistance of Republican senators to giving Garland a hearing and vote.

Security descended on the D’Angelo Law Library for the event, and the northern approach to the building was blocked by a long row of CTA buses and city dump trucks. Well-dressed law students, reporters, and University personalities crowded into the first floor of the building.

Before engaging in an interview with Law School professor David Strauss, the President commended the law student attendees for their honorable professional pursuits.

“To stay engaged, get involved, make a difference. It doesn’t mean you have to run for office, doesn’t mean you even have to work for government. There are a lot of ways of serving, but I do hope that one of the things you take away from our discussion today and your extraordinary education here at the University of Chicago is the incredible high that you can get from serving this country,” Obama said.

Obama, who served as a constitutional law professor at the University for 12 years, said that the process of appointing a justice to the Supreme Court is historically routine: the President makes the nomination, the Senate asks the nominee questions, and then a vote is held. 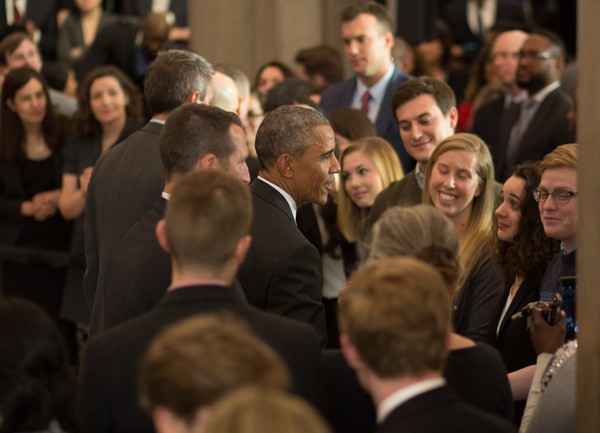 After the event, Obama shook hands with University of Chicago Law School students in the crowd.

The President noted that his nomination of Garland to the highest court in the land has been unique in that Republicans in the Senate have refused to even consider the nominee, maintaining the court vacancy created by the death of Antonin Scalia. Obama argued that the integrity of the institution is being eroded and the people’s confidence in the court weakened as the sharp polarization of electoral politics has seeped into the judicial system.

“It’s not just that the Republican majority in the Senate intends to vote against a highly qualified judge,” Obama said. “We now have a situation where they’re saying we simply will not consider the nomination itself.”

“Not only are [Republicans] not willing to hold a vote at this point, they have refused to hold hearings on Judge Garland. In some cases, Mitch McConnell and others have said, ‘we will not even show the courtesy of meeting with the Judge to find out what he thinks,’” he said.

While answering audience questions, the President addressed the disappointment of critics who viewed the vacancy on the court as an opportunity for him to appoint a more liberal and diverse candidate. Obama explained that he does not scout specific demographics to find nominees. He stated that there are more African American, Latino, Native American, Asian American, and LGBT judges than ever before.

“Not to brag, but I have transformed the federal courts from a diversity standpoint with a record that’s been unmatched,” he said.

“At no point did I say, ‘Oh, I need a black lesbian from Skokie…. Yeah he’s a white guy, but he’s a really outstanding jurist. Sorry, I think that’s important,” said Obama. 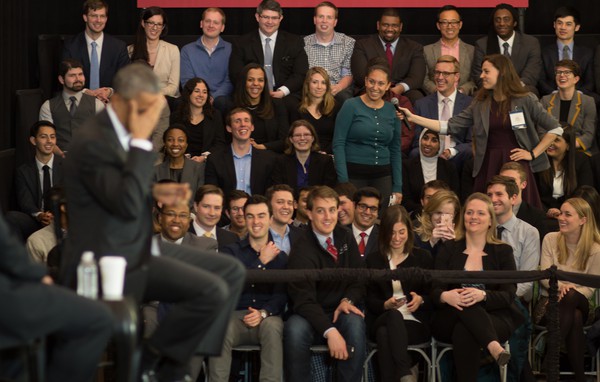 President Obama jokes with a Law School student who asked him a question.

The final question of the event, which regarded the message that American use of drones is sending to the global community, was welcomed by Obama despite his reservations over the veracity of the question’s underlying premises.

Obama reminded the audience that when he took office, the United States was engaged in two wars and al Qaeda was a growing threat. The technological abilities and precision of military weaponry began to accelerate prior to his administration, he said.

The President acknowledged that drone strikes are responsible for the death of innocent civilians, but said they are far less so than conventional warfare. 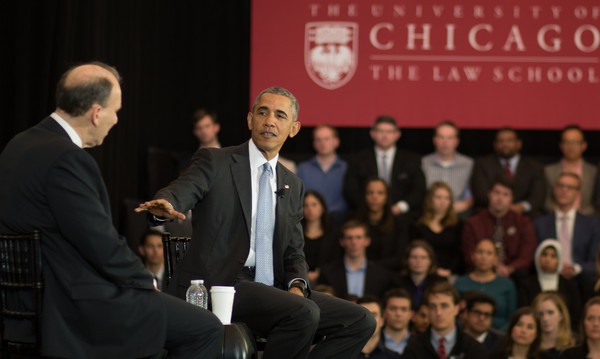 Obama Will be at Hyde Park Home on Friday

Obama will be attending a campaign event for Democratic Congresswoman Tammy Duckworth.