From Weiner to Loser: The Fall of a Representative 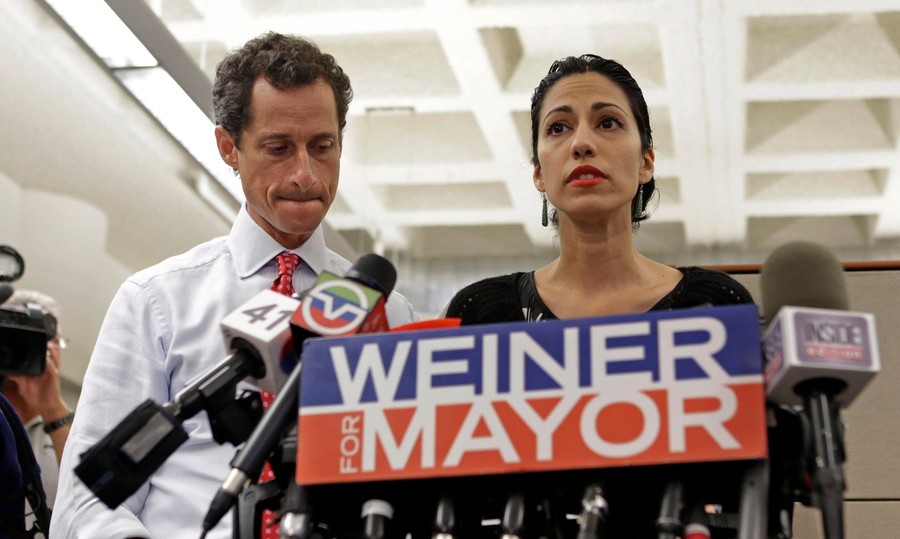 Weiner follows the 2013 mayoral campaign of former New York congressman Anthony Weiner, who resigned in 2011 amid a scandal where a series of lewd photos were leaked.

“This is the worst. Doing a documentary on my scandal,” opens Anthony Weiner, former congressman and 2013 Democratic nominee for New York City mayor.  People familiar with the Representative’s 2011 scandal may understand why Josh Kriegman and Elyse Steinberg, the directors of the documentary screened last Friday at the Institute of Politics (IOP), found Weiner’s campaign worthy of depiction. And worthy it is.

Weiner is a documentary that prompts the same question the filmmakers ask Weiner at the end of the film, namely, “Why did you let us film this?” After all, the film is an unsparing depiction of the former Representative’s mayoral campaign. Following what was thought to be his career-destroying scandal that forced him to resign from Congress, Weiner tenaciously pursued the mayoral office, seeking redemption for his wife and two-year-old son.

The film begins with pre-scandal Representative Anthony Weiner. Weiner had a reputation as a stereotypical New York Representative—spirited, unflinching, loud, and mad as hell. Weiner’s first experience going viral was when a clip of him yelling on the House floor, chiding House Republicans for using government procedure as an excuse for not voting in favor of a bill that would guarantee medical treatment to 9/11 responders, got over 339,000 views.

A year later, Weiner went viral once more. In 2011, the Representative’s Twitter account posted a photo of a man’s bulging underwear. While Weiner first denied the photo was of him, he was soon compelled to admit the truth after more photos were leaked to the media. Soon enough, Representative Weiner resigned, but vowed to “clean up the mess [he] made.”

The appeal of Weiner is not so much the man himself as it is those surrounding him. The film ably demonstrates the effects of the scandal on Weiner’s two marriages—to his city, and to his wife. In the early stages of Weiner’s campaign, the people of New York were willing to absolve him. At town hall meetings, the public even heckled candidates who discredited Weiner on the grounds of his misconduct. In fact, Weiner was leading polls at the start of the race. The time was ripe for what could only be described as a Rocky-esque comeback of a political campaign. Kriegman and Steinberg capture that energy in their documentary, compelling you to celebrate with Weiner as he parades through the streets.

Unfortunately, a man’s past never dies. In the summer of 2013, more risqué photos dating from before and after the earlier scandal were leaked. The public subsequently turned on Weiner and his campaign for mayor tanked.

More interesting than his relationship with the public, however, is that with his wife, Huma Abedin. Abedin is considered to be among Hillary Clinton’s closest advisers, and Clinton has even referred to Abedin as her second daughter. While Abedin did not want to participate in the documentary, her presence is felt throughout the film. When the second batch of photos was released, all eyes looked to Abedin. The movie at times seems just as much about her as it is about Weiner.

In one of the more powerful scenes following the leak of the second batch of photos, Kriegman and Steinberg disregard their “fly on the wall” status and ask Abedin, “How are you doing?”  Abedin smiles, turns to make her coffee, opens the cabinet to swallow her pills, and turns to the filmmakers with a grin: “It’s like I’m living in a nightmare.”

The most important question the film asks is whether a politician’s personal life should determine his eligibility for elected office. Weiner may have had good ideas for housing in the Bronx or employment for the middle class, but the media never asked, preferring to psychoanalyze him instead.

Perhaps Weiner would have made a good mayor; many argue that Bill Clinton was a good president. But, as the opening quote by Marshall McLuhan states, “The name of a man is a numbing blow from which he never recovers,” and so we are left only with Weiner, in all his scandalous glory.