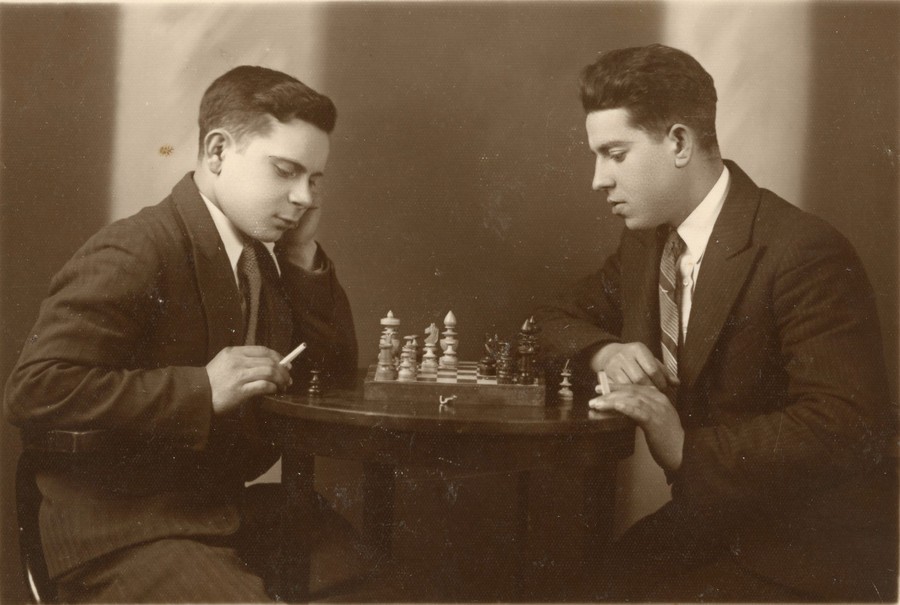 Pictures that Max Asaf found in his father’s closet are the basis for his documentary, Memories From a Vanished World.

Last Friday I sat down with Max Asaf, a fourth-year cinema and media studies major in the College, the day before he boarded his flight to France, where he is promoting his film at the Short Film Corner of the Cannes Film Festival.

“Memories from a Vanished World” is a 33-minute documentary that uses interviews with Asaf’s family members and photographs of his grandparents’ family to capture pre-Holocaust Poland. We discussed his film—its inspirations and the process of making it—as well as his experience as a cinema and media studies major and his agenda at Cannes.

“Memories from a Vanished World” was primarily intended to be the creative portion of Asaf’s senior thesis.

“It made my written thesis a lot easier,” he admitted with a laugh.

The concept for the film began a couple of spring breaks ago, when he discovered an old box in his father’s closet containing black-and-white photos. His grandparents had brought them with them to America when they emigrated from Poland, right before political tensions climaxed. As the only members of their family to leave Poland before the Holocaust, they were also the only ones to survive it.

The film is based on interviews Asaf conducted with family members, in which they discuss the pictures and provide personal reflections. “[Most of the time] they’re basically guessing, they don’t know much more than I do,” Asaf observed.

Sometimes these interviews are voiced over the cryptic photographs, a technique he believes contributes to ambiguity and poetic reflection. Asaf also juxtaposes these photographs of the past with modern-day footage he collected on a trip to Israel, fostering interaction between images “signifying absence of the past” and those “showing life that now exists.” Asaf’s adoption of this technique was influenced by Night and Fog (1955), an iconic documentary about the Holocaust in France.

While the contrast between the obscurity of the past and the reality of the present runs through “Memories of a Vanished World,” Asaf explains that this is not the primary theme of the film. In the process of interviewing his family about such an arcane part of their history, he found that the film’s true aim is verbally engaging with stories that aren’t talked about.

Asaf elaborated, “I originally thought it was just going to be about the images, but then I realized it had to be about speaking, with the images as a catalyst… [The film] is about speaking about ‘it’ for the first time… just talking.” It’s the evocative nature between image and dialogue—this artistic dialectic at the heart of cinema—that completes his film.

Upon applying for a student job position at Cannes through the American Pavilion, Asaf discovered he could submit his own short film as a student work. However, this required him to speed up his production rate to meet the Cannes deadline. “It was a month of all-nighters in Logan,” he joked.

For Asaf, the most difficult part of creating the film was the editing stage. Faced with roughly 60 hours (!) of digital film footage, he had to construct a story no longer than 35 minutes, the limit for a short film submission at Cannes. “[With this footage], there is an infinite number of stories I could create,” he said. “I had to narrow it down to one or two good ones.”

We also talked at length about the cinema and media studies department. His most enthusiastic advice for any prospective film student is to take Judy Hoffman’s two-quarter sequence on documentary production. Besides being one of the only production-focused classes offered in the College, he gushed that Hoffman “taught me everything I know on how to make a film—even with fiction, which I still want to do.”

Asaf also highlighted the resources available to film students willing to experiment, such as the Cage in the basement of the Logan Center. “It’s invaluable to learn what not to do,” he stressed. “If you want to make something, or even think you want to, just go there… It is pretty intimidating, but once you get over that, you’re going to end up making something.”

Finally, we discussed his plans for Cannes. Asaf told me that his Cannes experience will be relatively unconventional, as he will be working five hours a day, promoting his film at the Short Film Center at other times, and eventually enjoying the other films and opportunities in his free hours. He’s looking forward to attending the premieres of new films by Steven Spielberg and Park Chan-wook, among others.

Asaf won’t be skipping out on the nightlife either. He let me in on some insider Cannes information: “Most of the networking at Cannes happens at the after-parties.” I hope he remembers to give Scorsese my e-mail.