Finding Art in Empty Spaces: Between the Ticks of the Watch at Renaissance Society 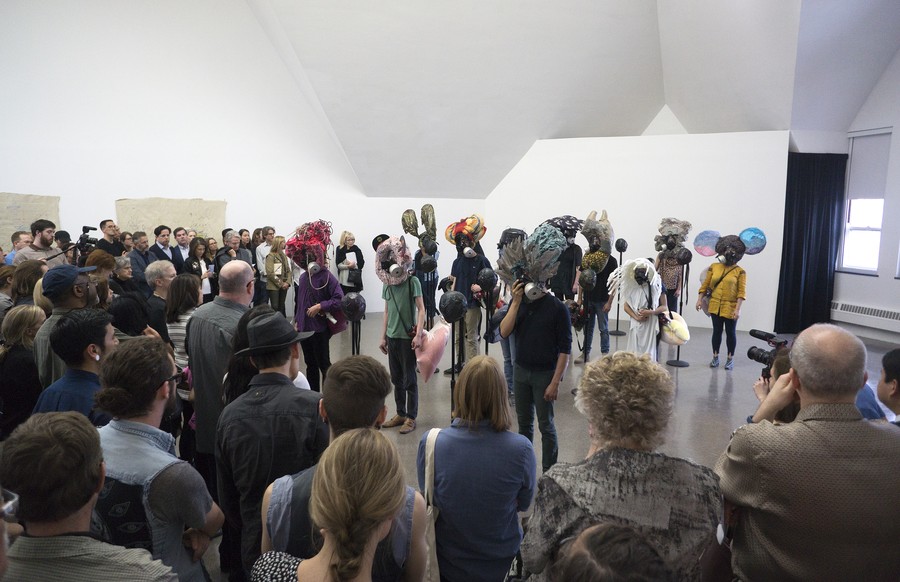 Courtesy of The Renaissance Society

The title of the Renaissance Society’s ongoing exhibition, Between the Ticks of the Watch, comes from a quote in George Kubler’s book The Shape of Time. Kubler defined actuality as the “instant between the ticks of the watch,” a moment in time that is “fundamental to human experience.” The doubt and questioning that arise in those spaces shape the way we understand the world.

In this way, the Renaissance Society’s final exhibition of the academic quarter takes us back to the purpose it outlined at the beginning of last year: to stay inquisitive.

“It was good to start a new centennial by asking questions,” said Solveig Øvstebø, the Society’s executive director and chief curator.

She began to seriously consider the problem of doubt after the Paris attacks last year.  “Why is there no doubt in such extremist actions?” she wondered.

As Øvstebø remarked, doubt plays an important role in society, politics, and science, and even has a central place in art.

In the exhibition, five artists engaged doubt and questioning through different disciplines and media.

The first piece is at the entrance, where artist Peter Downsbrough placed the words of the installation title— “AND AS PLACE SET”—spaced apart and mirroring each other on two white walls to investigate the way we consider language and space. Just as Kubler pointed out the suspended gap of time between the ticks of a watch, Downsbrough’s second installation featured a black rod that hung down from the ceiling, as if connected to perpendicular black line on the floor, but was in fact a few millimeters off the ground. This subverted the usual emphasis on the perceptible and concrete to draw attention to the hidden, intangible space in between.

This spatial element was echoed in other works throughout the exhibition. Goutam Ghosh’s sculptural boxes contained a variety of physical items, such as string, pieces of wood, and feathers, separated by gaps that were meant to convey ambiguity and hint at something unfinished. Ghosh united areas as seemingly disparate as religion and mathematics in his work to explore the interplay between the spiritual and concrete.

Falke Pisano was another artist featured who incorporated mathematics in her art. Next to her sculpture, Negotiations in Exchange Pisano included a plaque of text that asked the viewer, among other things, “How can knowledge of mathematics become a critical tool and a means of resistance against a dominating culture?” Mathematics has its place not only in theory, but also in practice—the “cross-cultural transactions” of the real world.

Yet numbers are not infallible. In her video “The value in mathematics (language),” which played behind a curtain in the corner of the exhibition, Pisano and two mathematicians discussed the doubt that can take shape in a field characterized by logic.

While the aforementioned artists explored the doubts they have about concepts and disciplines, the questions asked by Martha Wilson in the exhibition were mostly self-directed. In her series of photographs, Portfolio of Models, she depicted herself dressed up as the different ‘models’ that society offered her —“Goddess, Housewife, Working Girl, Professional, Earth-Mother, Lesbian”—and concluded that none of them “fit.” The idea of self-questioning was even more directly portrayed in one of Wilson’s other pieces, Mirror Mirror, where women were pictured holding mirrors to their faces.

The most visually striking installation in the room was Kevin Beasley’s Your face is/is not enough, which featured 12 black gas masks, each surrounded by a headdress, mounted on stands next to a megaphone. When Beasley first debuted his piece at the exhibition’s launch on April 24, he had 12 people walk around the crowded room in the masks, breathing loudly into the megaphones, for almost 40 minutes. This uncomfortable experience tapped into the real-world tensions associated with gas masks. Beasley pointed out the irony of gas mask-protected aggressors spraying tear gas against defenseless victims. The juxtaposition between the hard mask and the soft white dress draped over one of the sculptures spoke to this conflict.

Despite the many questions raised by these artists, Øvstebø stressed that the aim of the exhibition was not to portray doubt through an academic lens, but rather to offer “different platforms from which we can look at the subject.” The five artists, whose explorations manifested themselves in forms ranging from sculpture to film, challenge the viewers to look at the way doubt penetrates fields such as politics and mathematics, as well as our own lives. Art has always invited questions, and Between the Ticks of the Watch does so compellingly. It suggests that we should look for our answers in the spaces between the specific, in the pauses that follow and precede every precise tick of our clocks.

Between the Ticks of the Watch will be on display in the Renaissance Society (Cobb Hall, fourth floor) through June 26.