Seminary Co-Op Celebrates 55 Years of Getting Lost in Lit

Courtesy of the Seminary Co-Op

There’s a monastery in Hyde Park. Not many would call it that, but, more often than not, you will find students and Hyde Park residents congregating within its intimate abode. There, professors come to preach scholarly ideas, worship is done privately and in silence, vows are made, and your bible—well, it’s in your hands which academic title you choose to sanctify.

Formally, this sacred ground is known as the Seminary Co-Op. Located on South Woodlawn Avenue with another branch on East 57th Street, the store’s sweeping collections of books, organized in elaborate mazes, induce customers to explore and discover. Spend enough time here and you will undoubtedly feel the allure of being ensconced by interminable shelves of great literature.

None, it seems, escape the charming spell of the Seminary Co-Op. Yet while everyone recognizes and appreciates the store, not many know its origins.

John Mendonca, James Cavanaugh, and Joseph Pickle, the three students who founded the Seminary Co-Op, believed that they could gather the resources to sell the many obscure books that their courses demanded at affordable prices.

“The Co-Op was founded by at least three people, but depending on whom you ask it may be 17 people. But [the] three main shareholders [were] the first three founding members,” said Jeff Deutsch, the current director of the Seminary Co-Op bookstores.

The first Seminary Co-Op bookstore was located in the basement of the Chicago Theological Seminary, now Saieh Hall. The founding managers, being the college students they were, crammed books in whatever space was available. “They would just find whatever corner they could find a bookshelf and put a bookshelf there,” Deutsch said. “So there were bookshelves on pipes and anytime there was a small space they took it over. And there was this labyrinth of shelving that was so easy to get lost in and made one feel small in the best possible way, just surrounded by ideas.”

Thus, the Seminary Co-Op was born in 1961, nursed in the cranny of the Chicago Theological Seminary with 17 members. But soon it grew. 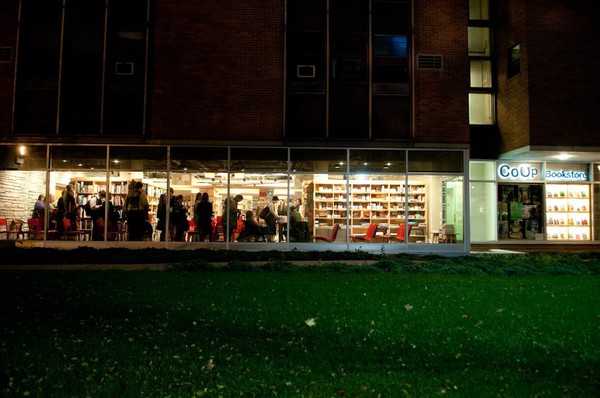 Its growth and prestige are due largely to the work of Jack Cella, the storied general manager and Deutsch’s predecessor. Over the course of 43 years, Cella expanded the Seminary Co-Op to its current status. According to Deutsch, Cella’s labor turned the bookstore into a “Mecca for academic titles.”

“We had a very large following through our mail-order business, and a number of people still stay with us even though they can get the books elsewhere,” Deutsch said. “They believe in what we do, they think that as a cultural institution we’re important, and they support us.”

The Seminary Co-Op soon became so distinguished that Cella was approached by Columbia University to open a store there. For reasons unknown, Cella turned down the offer.

Since then, the Seminary Co-Op has remained integral to Hyde Park’s culture. It ranks alongside the other idiosyncrasies of Hyde Park—gothic architecture, streets brimming with diner food, and the Obamas.

In October 2012, the Seminary Co-Op moved to its new location on Woodlawn. The current space replaced the cafeteria of what was the dormitory for Chicago Theological Seminary students. Its modern space is meant to reflect the traditional appeal that the basement-bookstore had. Tigerman-McCurry Architects wanted to reproduce the maze-like organization of books that was so unique to the old location.

“What was most important was the stacks, and they did a remarkable job retaining that labyrinthine quality and allowing you to get lost in the books,” Deutsch said. “I dare you to go into ‘Literature’ and find me Joyce and then quickly find me Musil. You’re not going to be able to do it because the shelving is set up so that you can’t.”

In an age that emphasizes immediacy, the Seminary Co-Op remains one of the few bookstores that values patience in the search of a book. Not many businesses would take pride in telling its customers to “Get Lost!” But this is precisely the idea that is at the foundation of the Seminary Co-Op. It is the search that is essential, not the end.

This same philosophy permeates 57th Street Books, a bookstore that the Seminary Co-Op owns and operates. 57th Street books was founded in 1983, when Cella was approached by the landowner of the building. He asked Cella to stock the available space with another legendary bookstore.

57th Street Books, however, has a somewhat different purpose than the Seminary Co-Op. In an attempt to preserve the distinct nature of the Woodlawn store, the Seminary Co-Op has realized an unusual model: to split the two stores by genre.

“The idea behind it was to have a balance with the Co-Op.  [There were books] on traveling, mystery, cooking, and other things; endeavors that were not academic in nature could have a place to be celebrated,” Deutsch said. “The same fine curation that went into a store like this [the Seminary Co-Op] could go into a general interest community bookstore.”

Yet, despite the reputation of the Seminary Co-Op and its attempts to diversify its collection, it still struggles to maintain a steady profit. It is no secret that the Seminary Co-op has had its share of financial difficulties. Its core philosophy is in many ways an impediment to its financial success: in the age of online retailers and immediate gratification, it is difficult to promote a more deliberate, inquisitive approach to book-buying.

“The last decade has not been good for us, and there’s certainly some things that we could have done better and that we could do better. We currently lose a couple hundred thousand dollars every year, and we won’t be able to survive with the way we are operating now,” Deutsch said. “The key to our survival [is the] community—those [who] care about spaces that are a little inefficient, that are a little slow, but see us as a cultural institution as much as a retail environment. Those people make conscious decisions to buy books from us. [. . .] We’re trying very hard to run a cultural institution and we’re trying to retain this breadth. We need a good couple of years to stabilize and hopefully figure out a business model that doesn’t compromise our cultural values.”

While the Seminary Co-op may not provide the fastest route to purchasing a book, it has always distinguished itself through its commitment to its cherished, unique values. Deutsch explained that these cultural values are at the heart of the Seminary Co-Op: “Coming together, browsing, discovery, slowness, community, human interaction, and things of that sort. We have well over 50,000 members now and that membership, the active component of that membership believes deeply in bookstores and spaces, community gathering, discovery, and that there’s an experience that can’t be replaced by a search engine.”