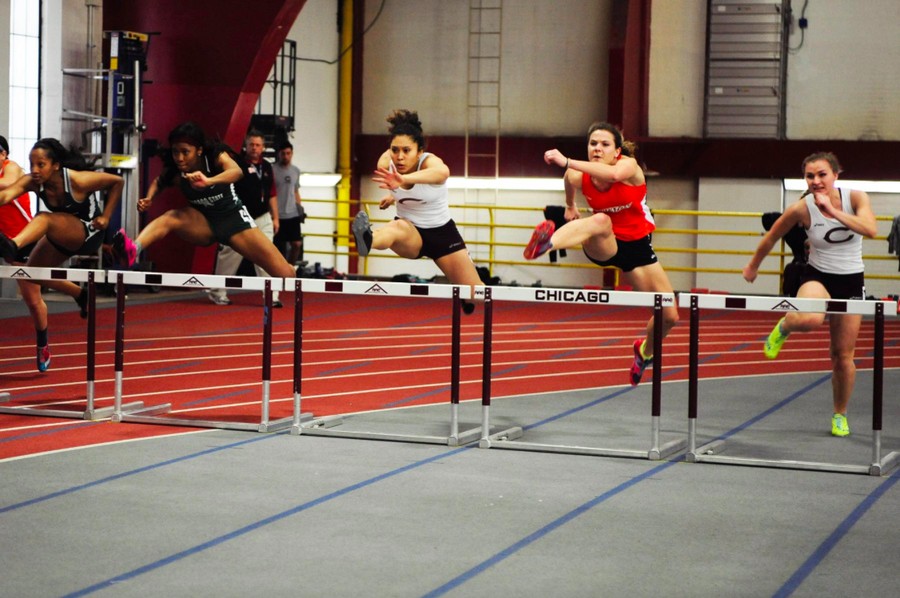 For the next two days the DIII Men’s and Women’s Outdoor Track and Field Championship will continue in Walston-Hoover Stadium at Wartburg College.

The Maroons have sent nine participants to compete in seven different events at the Knights’ home in Waverly, IA. Anticipating a thrilling meet, third-year steeplechase runner Minnie Horvath said, “It’s been exciting to see that we have some of the top athletes in the country and to see everyone’s hard work paying off. As for this weekend, I hope we have a lot of people competing on Saturday! We’re in an excellent position to shock the nation in every event!”

But immediately, all of the athletes were thrown a curveball, as the events on Thursday were moved up two hours in order to avoid impending thunderstorms.

Fourth-year vaulter Michael Bennett was the first to feel the effects as his event was moved up to the first spot on the timetable at 10 a.m. Just coming back from injury, the former indoor national champion qualified with a 4.91m height. The height set him as the 18th of 20 qualifiers, but if he had been able to match his personal record height he would have challenged for some points in the event. Unfortunately, it was not to be. Bennett’s final height of 4.90m was good for an impressive 14th place finish in the event.

The next Maroon to take to the track was second-year Megan Verner-Crist, running in the second preliminary heat of the 1,500-meter race. As the 18th qualifier in a field of 22, she needed to make up some ground on the rest of the field in order to qualify for the final to be run on Saturday. Garnering sixth place in her heat, Verner-Crist turned in a 4:36.71. However, it was not enough, as she came a mere two seconds short of qualifying for the final.

Horvath was in a similar predicament for the 3,000-meter steeplechase. Also the 18th qualifier in a field of 22, Horvath needed to finish in the top five of her heat or have one of the next four fastest times between the non-automatic qualifiers from both heats. Struggling through some nagging injuries, Horvath was unable to achieve these goals, but certainly had nothing to hang her head about.

The final Thursday preliminary race was the women’s 4x400-meter race. The team of first-year Nicole VacaGuzman, fourth-year Mikaela Hammel, first-year Emma Koether, and anchoring third-year Michelle Dobbs came into the race as the 12th-seeded team. The quartet set a personal record for the season with a time of 3:48.60, but it was only enough for 11th place with the top eight teams making Saturday’s final.

With Thursday’s preliminary events yielding no finals appearances, it is up to fourth-year high jumper Nelson Trotter and reigning indoor 800-meter national champion Dobbs to represent the Maroons on Friday, and second-year Khia Kurtenbach to do the same in the 5000-meter on Saturday.