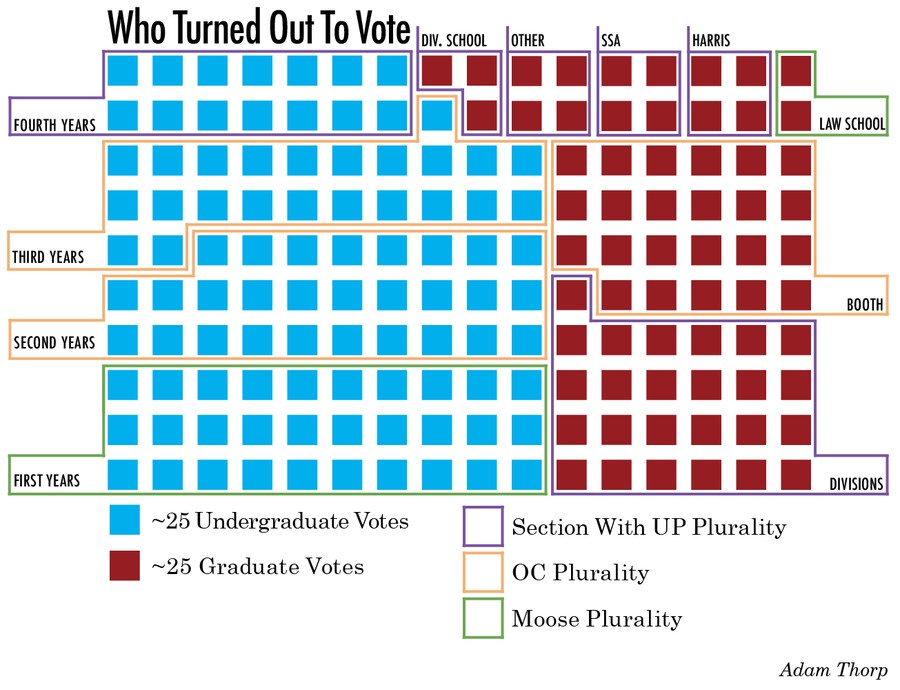 Current and prospective Student Government (SG) members gathered in Reynolds Club at 6 p.m. today to await the announcement of election results for the upcoming school year.

Polls opened on Monday at 10 a.m. and closed today at 4:30 p.m. The Election and Rules (E&R) Committee began to tabulate the votes from each division of the University at 5 p.m. in Reynolds 016. 3969 students voted this yearthis year, up from 3127 last year.

E&R Chair Max Freedman announced the winners, beginning with United Progress (UP) as the new Executive Slate: second-year Eric Holmberg as President, first-year Salma Elkhaoudi as Vice President for Administration, and graduate student Cody Jones as Vice President for Student Affairs. UP won with 1403 votes. Our Campus came in second with 1108, followed by Moose Party with 750, Unite & Support with 300, and “Prefer Not to Vote” with 105.

“I’m really thrilled we won and people thought we were the right choice. I’m glad graduate students are going to be a little bit more represented and I’m looking forward to doing good work with Eric and Salma,” Jones told The Maroon.

“I’m really grateful to everyone who participated, excited that turnout is continuing to grow, and can’t wait to get started moving campus forward,” Holmberg said.

“I’m super excited and grateful. Ready to represent our amazing class and build a better student government that works for all students,” Shariyf said.

“It's humbling to be one of the people chosen from eight incredibly strong candidates to represent our class. Election season isn't easy and I have a lot of respect for everyone who ran. Right now, I'm just ecstatic to start pushing this University to do the best for its students and community and I'm also incredibly hyped to see the growth that I know will happen in the coming year,” Senthilkumar said.

Graduate Council representatives are elected by their own divisions in a separate electoral process.

“We received significantly fewer complaints about candidate conduct than last year so I would like to thank the candidates on behalf of the whole committee for acting in a sportsmanlike and ethical manner. I’d like to congratulate every candidate for making the decision to run and participate in the democratic process, and I’d especially like to give my heartfelt congratulations to those who won this year,” Freedman said.

This article was updated on the day of publication to reflect candidate reactions to the election.