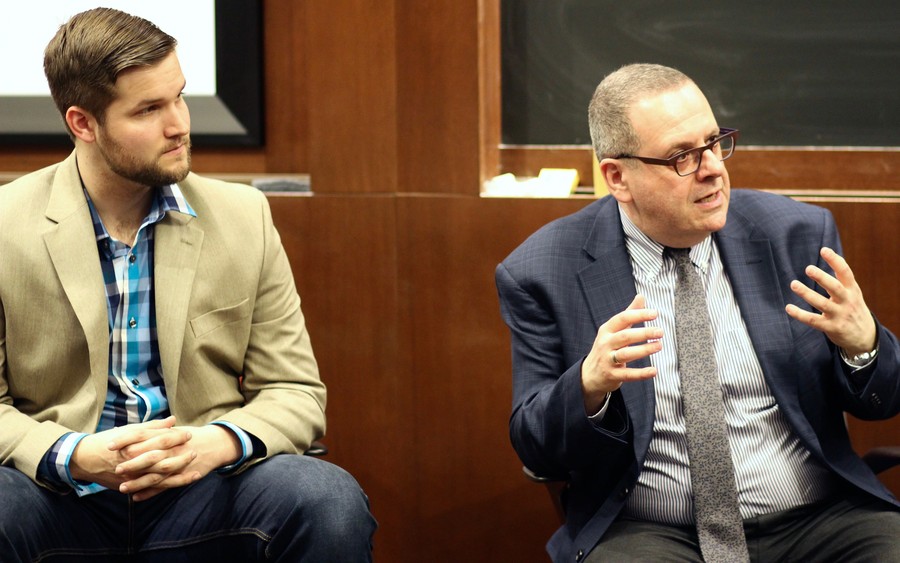 On Tuesday night in Saieh Hall, the Intercollegiate Finance Journal at UChicago hosted “Opera-nomics: The Business of Opera,” a panel discussion on the economics of opera. Co-moderated by second-year Eric Li and third-year MJ Chen, the panel brought together the general directors of two Chicago-based opera companies: Anthony Freud of Lyric Opera of Chicago and Daniel Grambow of the Floating Opera Company.

The panelists represented different extremes of the operatic landscape. Based in the Civic Opera House, Lyric has been a Chicago mainstay for more than 60 years and has an annual operating budget of about $75 million. Floating Opera, which performs in venues throughout the city, was incorporated as an LLC last year and had an annual budget of only $25,000 its first season.

Freud admitted that, as the general director of the second-largest opera company in the United States, he envied the “flexibility and nimbleness” possible in smaller companies like Floating Opera, especially given the general decline in ticket sales and subscribers for opera over the past 50 years.

“[Lyric is] rather monolithic in arts organizational terms, in that it has a very large, inflexible overhead that plans four to six years in the future,” Freud said.

On the other hand, Floating Opera is, in Grambow’s words, a “professional development company” which attracts young, employable singers new to the Chicago area.

“We are very, very flexible, but at the same time we try to prioritize the basics,” he said. “We’ve done Cosi fan tutte, we’ve done Don Giovanni, we [are going to do] Le nozze di Figaro…so people who are coming to Chicago who have never sung a role in those operas have an opportunity to learn them.”

Though Floating Opera holds standard repertoire at the heart of its programming, there’s little that’s “standard” about its productions, which are often held in unconventional venues. A recent example was the company’s Don Giovanni, which was staged in the Bohemian National Cemetery on Chicago’s North Side. Upon the conclusion of the opera’s run, Floating Opera donated $1,000 of total ticket sales back to the cemetery, which is recognized as a National Register of Historic Places site.

“Activating spaces around your community makes the community engage with what you’re doing,” Grambow said. “We partner with as many different people as we can.”

Freud pointed out that the community engagement Grambow described contrasts markedly with so-called “outreach” by larger companies. He noted with relief that arts organizations are shying away from framing their community involvement efforts as such.

“[If] a big opera company goes into a community and says, ‘Here is Tosca, we think you should like it,’—that’s not collaboration, that’s colonization, and that went out of fashion with the British in India,” Freud said. “We [ought to go] to a community with humility and an [interest] in exploring more ways in which we can collaborate, not on our terms, but on [its] terms.”

“I think our work should reflect the communities that we’re in,” Grambow said. “I think we need to make choices as artists to comment on the things we think are important, and we need to take the tools we have to make that commentary.”

To that point, Freud and Grambow agreed that an opera company of any size must have this strong sense of identity in order to realistically assess what it can and cannot do.

“There are many small-scale opera companies that think of themselves as intimate Metropolitan Operas, and I have a problem with that,” Freud said. “It’s our job as opera administrators to offer our audiences the real thing, not something compromised.”

The 2013 folding of New York City Opera, which was broached in the post-panel Q&A, was provided as an example of institutional identity crisis. Freud called the company’s bankruptcy “tragic, but predictable.”

“There is a very specific challenge of second opera companies in major cities that are not diverse in the way that Floating Opera is completely different from Lyric Opera,” he said. “New York City Opera failed to create a brand identity that was distinct from the Met at a time when the Met’s brand was being sharpened and revitalized.”

Though some naysayers viewed New York City Opera’s fate as indicative of a greater decline in opera, both Freud and Grambow rejected the notion that the art form was in grave danger.

“I think it’s impossible for opera to die, because there are so many people [out there] who are making it continue,” Grambow said.

“If you distill opera down to its basics, what is it? It’s telling stories through words and music, and that’s utterly universal,” Freud said. “My job is to keep this institution as relevant and vibrant and healthy and accessible as I possibly can, for as long as I possibly can.”