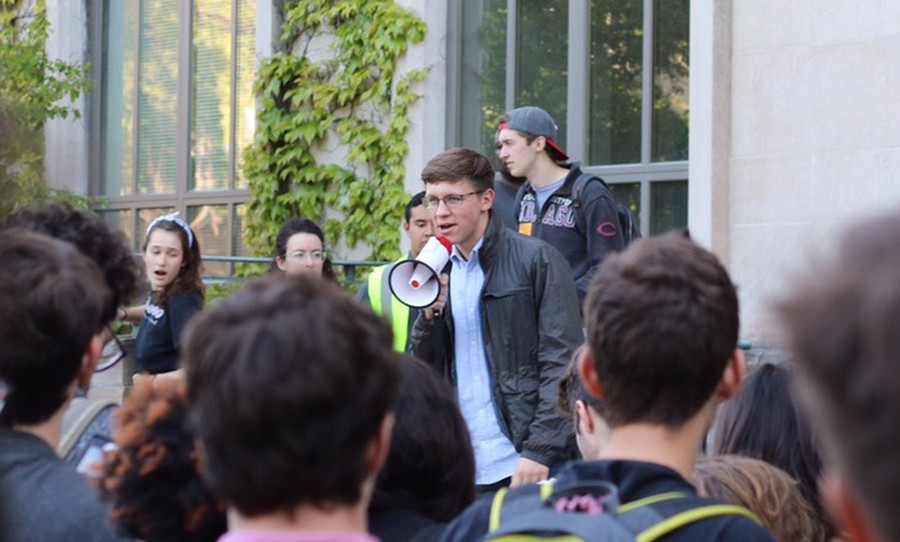 SG President Tyler Kissinger speaking over a megaphone at the May 19 rally outside Levi Hall.

Fourth-year Student Government (SG) President Tyler Kissinger will go before a disciplinary committee on Friday, the day before his expected graduation, after he opened an administrative building to protesters on May 19.

Kissinger and 33 other members of the IIRON Student Network participated in a sit-in on the fifth floor of Levi Hall near Provost Eric D. Isaacs’s office. Outside Levi, more than 150 students rallied to “democratize” the University. Students led chants and gave speeches calling for a $15 per hour minimum wage for campus workers, equitable policing, and divestment from fossil fuels, among other demands.

Kissinger told The New York Times that he has since been formally charged with “premeditated and dishonest behavior to gain entry to Levi Hall, creating an unsafe situation.” On the day of the protest, Kissinger said that he entered Levi by telling security he was there on SG-related business. The challenge was getting the 33 other protesters inside.

“They had installed two layers of locked doors, so the main door at the edge of the building, both on the North and South lobby are now locked, and then there’s also an interior door on the second floor on the North staircase that’s locked,” Kissinger told The Maroon. “You have to go through that door to get access to both the second and third floors.”

Kissinger used his backpack to prop open the second-floor interior door for 30–40 seconds, while he went downstairs to open the first-floor door for his fellow protesters.

“I’m obviously hopeful it’s not expulsion; I hope that I get to walk at graduation this Saturday,” Kissinger said. “I’ve spent a considerable amount of time working on getting a degree in public policy, but it’s hard for me to really say. I don’t know.”

Kissinger cited a lack of precedent from similar cases as reason for his uncertainty. On May 29, 1967, more than 120 students participated in anti-draft sit-in in an administration building, and while 58 students were suspended for the next quarter, most of the suspensions weren’t carried out. In March 1969, however, 42 students were expelled and 81 were suspended for a sit-in.

“Aside from the cases mentioned back in the ’60s, there isn’t a whole lot of precedent for a case like this,” Kissinger added, also noting that as far as he knows, he is the only person who participated in the sit-in to be summoned to a disciplinary hearing.

According to the Student Manual, if a disciplinary committee hearing is convened before a student’s scheduled graduation, the student’s graduation will be postponed until “the conclusion of the disciplinary proceedings” and “the completion of all sanctions.”

“My parents are concerned because they don’t know if they should be coming to observe my graduation or not, or if I should be spending the few dollars to buy my cap and gown,” Kissinger told The Times.

Kissinger also told The Times that prior to being summoned to the disciplinary meeting, he had met with Dean of Students in the University Michele Rasmussen about his conduct at a May 24 open meeting of the SG General Assembly, where IIRON students grilled Provost Isaacs with prepared yes-or-no questions.

Kissinger said that the protest did not come up in his conversation with Rasmussen: “Everything she said to me was framed in the context of the Assembly meeting, but I think the sit-in was certainly an elephant in the room during the entire conversation.”

A Change.org petition created by the IIRON Student Network calling on the University to dismiss disciplinary charges against Kissinger had garnered more than 1000 signatures by the time of the writing of this article. “Disciplinary action such as this against [protest] stifles free speech, and suggests that the University is not tolerant of viewpoints that challenge its own,” the petition reads.

Since the sit-in, Kissinger has criticized the University for what he sees as hypocrisy in its stance on free speech. NBC Chicago Channel 5 was told by the University that it could not film the May 19 protest because it had not obtained prior permission, as is required by University policy to film on the quad. Later that day, Kissinger tweeted:

“I think it’s scary for a lot of people,” he told The Times, referring to his disciplinary summons. “If they are cracking down on people who are protesting, I don’t understand what the university means by free expression.”

Kissinger said that Rasmussen informed him in an e-mail yesterday that the president would not be able to schedule his quarterly meeting with the incoming and outgoing SG Executive Committees.

“Unfortunately, the president’s office has not been able to find a time to reschedule the spring meeting with President Zimmer before the end of the quarter. Thank you for your patience in the interim,” she wrote in the e-mail, adding that she will be in touch with SG leadership in the fall about the scheduling and format of next year’s quarterly meetings with the president.

In a Facebook post today, Kissinger wrote, “This University spends a lot of time talking about free expression and critical inquiry, but yesterday we found out that President Zimmer canceled his quarterly meeting with SG leaders, presumably because the inquiry got a little too critical.”

“We were informed…that our meeting for…Tuesday the 24th [of May] would have to be rescheduled. This is following the sit-in that had happened the Tuesday of this previous week,” Kissinger told The Maroon. “A fair amount of time had been spent on the planning of this meeting, both in the President’s office and on our end. So we were told Monday that it would have to be rescheduled. Sent many many many e-mails over the past two weeks to Dean Rasmussen, to the President’s office, working on getting it rescheduled. We were told yesterday that they are not able to find a time by the end of this quarter for us to meet with them.”

The protesters entered Levi around 4 p.m. on May 19, and had planned to sit in the administrative lobby until a meeting with the University was arranged. They came prepared with adult diapers, blankets, and clothes, but the sit-in ended after a little over an hour when Associate Dean of Students in the University for Student Affairs Belinda Vazquez told the students that if they remained, they could face disciplinary action or arrest by administrators and the University of Chicago Police Department (UCPD).

“Besides arrest, those of you who are students also face the real possible consequence of discipline. They have various outcomes related to discipline, up to and including suspension or expulsion. So I want you all to be aware of the options that are available,” she was recorded on video saying.

The May 19 sit-in and rally were organized in response to the administration’s lack of attendance at a public meeting of various RSOs. IIRON invited administrators including Provost Eric D. Isaacs, incoming Provost Daniel Diermeier, and Dean of Students in the College John “Jay” Ellison to a meeting during fifth week at which students planned to present their concerns and propose changes. The administrators did not attend the meeting.

After the protesters left Levi, Kissinger and the other students who participated in the sit-in joined the IIRON members rallying outside the building.

“I was just kicked out of the admin building that my tuition dollars go to pay for. I was kicked out with 33 other people, students and not students, because we wanted to talk to some people,” Kissinger said over a megaphone at the rally. “The same people who live in this locked castle are people who make decisions about our endowment, that make decisions about if we invest money to support people with disabilities, if we invest money to support survivors, and they make bad decisions.”