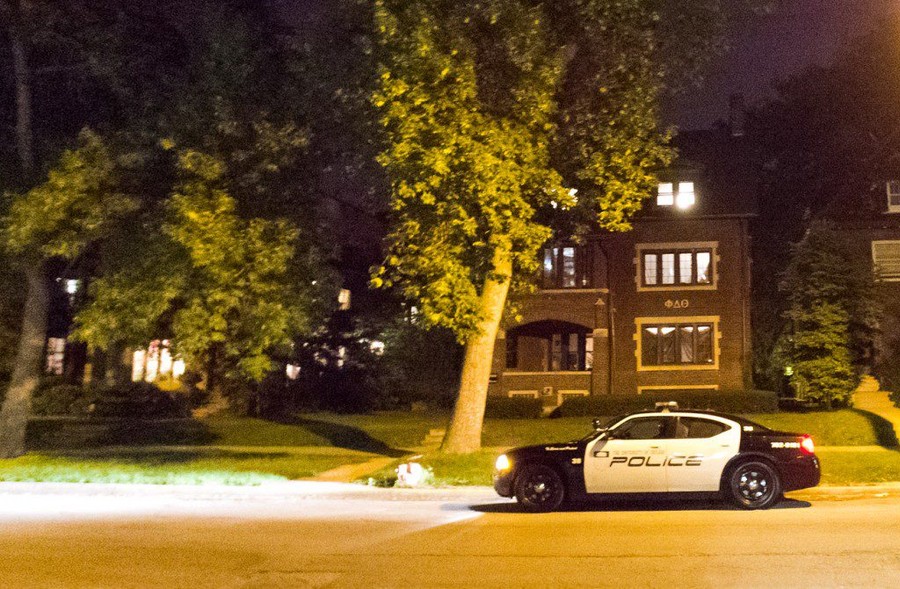 A UCPD car parked in front of the Phi Delta Theta fraternity house in 2013.

On Friday, a former pledge of the now-inactive UChicago chapter of Phi Delta Theta (Phi Delt) fraternity filed a lawsuit alleging that he was hazed by members of the fraternity who forced him to binge drink alcohol and physically assaulted him in the chapter house.

Rising third-year Dylan Kanaan filed the suit in the Circuit Court of Cook County against the Phi Delt fraternity, the Illinois Beta chapter at UChicago, and 13 students who were members of the chapter: then chapter president Nicholas Luthi, then pledge educator Mihir Dubey, then member Dakota Ford, and 10 other unnamed brothers. The three named students in the suit are rising fourth-years.

According to the lawsuit, Kanaan rushed Phi Delt in the spring of his freshman year and was offered a bid, meaning that he was invited to attend a pinning ceremony—a fraternity ritual where new pledges receive their pledge pins. In the suit, Kanaan claims that he was told by a member that alcohol would not be served at the ceremony.

After the ceremony on March 7, 2015, which began at 8:30 p.m. and lasted between 15–20 minutes, “the new pledges were forced by the members into a cycle of drinking shots of a clear-green liquid followed by a cup of beer from two kegs which were quickly set up in the ritual room,” the suit reads. “This cycle continued for 20–30 minutes, after which [Kanaan] believed he had been forced to drink approximately eight shots and six beers.”

Kanaan alleges that he was then told to drink a full cup of the “clear-green liquid,” which he later learned contained Everclear. He initially set the cup down, but when the same fraternity member told him again to drink the cup, he did. Then he blacked out, the suit says.

Kanaan claims that he “was singled out” and taken to Ford’s room in the basement to be physically assaulted. The suit gives no indication as to why Kanaan may have been singled out.

Thirty minutes later, Kanaan alleges that he “desperately sought to escape” Ford’s room after the assault. Despite resistance from fraternity members, Kanaan was able to exit through the back door of the fraternity. He ran to the front of the house, but “there he was obstructed by another fraternity member and assaulted again.”

The next day, Kanaan spent seven hours in the hospital receiving tests and scans, according to the suit.

“[Kanaan] suffered severe facial injuries, resulting in a permanent scar under his left eye, as well as the emotional and psychological effects of the hazing and assaults, including the diagnoses of depression and PTSD, manifesting as severe anxiety, sleep issues, and weight loss. Defendants' conduct caused [Kanaan] short-term and long-term injuries, including pain, suffering, permanent scarring, mental anguish, emotional distress, loss of normal enjoyment of life, and medical bills and expenses,” reads the suit.

Phi Delt has a policy against commenting on the specifics of pending litigation, but the fraternity issued a general statement saying that “Phi Delta Theta is a values-based organization which prohibits hazing and takes any such allegations seriously.” Phi Delt’s “risk management” policies include regulations against abusive behavior, alcohol, and hazing.

The Beta charter has not been active on campus since January when Phi Delt announced the suspension and re-colonization of the chapter for “risk management policy violations.” An e-mail announcement from the director of chapter services Michael Wahba to alumni cited a “decision by the University and members’ actions” as reason for re-colonization. At the time of publication, Chief Operating Officer of the fraternity Sean Wagner had not responded to a request for comment on whether Phi Delt was aware of Kanaan’s allegations when it decided to suspend the chapter in January.

Since 2000, alcohol has been banned by Phi Delt in all chapter houses, and Phi Delt’s risk management policy states that alcohol is prohibited at any pledge “program or initiation ceremony of the chapter.” The policy also specifically prohibits kegs.

The lawsuit, which seeks damages for an excess of $250,000, alleges that the chapter committed fraud: “Fraternity Defendants provided affirmative misrepresentations or omissions and falsely or deceptively sought to create the image and impression that its chapter housing and facilities were alcohol-free.”

University spokesperson Jeremy Manier said in a statement, "The University takes violations of policies seriously, and investigates and responds to misconduct where appropriate." Manier also cited the University's hazing policy, which states "The University of Chicago prohibits hazing and [hazing] is illegal in the state of Illinois."

A brother named in the $250,000 lawsuit provided fraternity listhost emails, pledge statements to University investigators, photos of pledges drinking 'Phi Nukes,' and his account of the night.