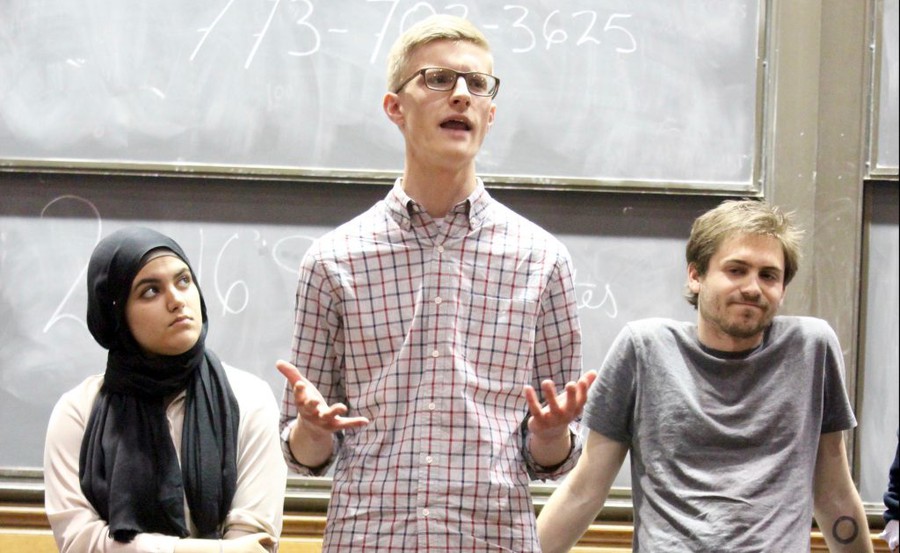 “It’s a messed up letter. I think the tone is condescending,” he told The Maroon. “The University is creating this threat of trigger warnings and safe spaces that really isn’t an active conversation on campus.”

Holmberg called the letter “hypocrital,” saying that the University hasn’t done its part to engage in challenging discourse with its students. He noted that activists have struggled to get administrators to attend their meetings.

“Of anyone else on campus, the administration is far more fearful of challenge and discomfort than any student I know,” he said. “It’s ironic that during my time at the University of Chicago, administrators have continuously sought to create a comfortable space for themselves free of challenge by avoiding engagement with student leaders,” he said in a statement.

“It’s a bit hypocritical, but I see why they’re doing it,” he said. “A couple of benefits: 1) Fundraising—I’m sure President Zimmer’s Op-Ed in the Wall Street Journal yesterdaywas good for polarizing around this topic and making it seem like it’s a big issue on campus. 2) It creates this spectre of trigger warnings and safe spaces based on false narratives of coddled millennials. That doesn’t really exist. There hasn’t been organized activism around trigger warnings on campus.”

In the op-ed, Zimmer wrote, “Universities cannot be viewed as a sanctuary for comfort but rather as a crucible for confronting ideas and thereby learning to make informed judgments in complex environments.” He spoke broadly about the University’s commitment to free expression, but he did not specifically address safe spaces or trigger warnings.

“[Ellison’s letter] reflects a misunderstanding of the terms being used,” Holmberg said. “I think their strategy is to create a false fight for free speech to ignore the concrete struggles that are going on.”

He pointed to a “Safe Space Program” run by the Office of LGBTQ Student Life as evidence that safe spaces are active and uncontroversial on campus. “The University has voluntarily instituted a safe space program, of which Dean Ellison is listed in the ally network,” he said. “It’s really not a hot-button issue.”

Holmberg said that the letter raised unnecessary concern among students that programs like the Safe Space program are at risk of change. University spokesperson Jeremy Manier told The Maroon that the program isn’t going anywhere: “There is no change to University policy,” he said, adding that Ellison’s note was “just a cover letter to accompany a [Dean Boyer] monograph.”

In a statement, Manier said that the letter only refers to “intellectual values,” and that students are still encouraged to “make use of the many support resources that exist on campus.”

“If that’s the case, the letter did nothing to make that apparent,” Holmberg said, responding to the University’s assertion that the letter was only about intellectual safe spaces.

Holmberg also noted that the LGBTQ Office declined requests for comment by DNAInfo on whether the letter would affect their programming. The Office could have said, “Just to be clear, we’re still good to go,” Holmberg said

Asked about the University’s response to the disruption of speakers by protesters, Holmberg said that he was also disappointed. In the wake of a call by Institute of Politics Director David Axelrod for the University to discipline students who interrupt campus events, Provost Eric D. Isaacs announced the creation of a faculty committee to reevaluate the range of possible disciplinary actions for students who shut down or interrupt speakers.

If there’s one thing that Zimmer, Ellison, and Holmberg can agree on, however, it’s that speakers should not be disinvited for holding controversial viewpoints: “I don’t support the disinvitation of speakers though, I will say that.”

“We do not support so-called ‘trigger warnings,’ we do not cancel invited speakers because their topics might prove controversial, and we do not condone the creation of intellectual ‘safe spaces.'”