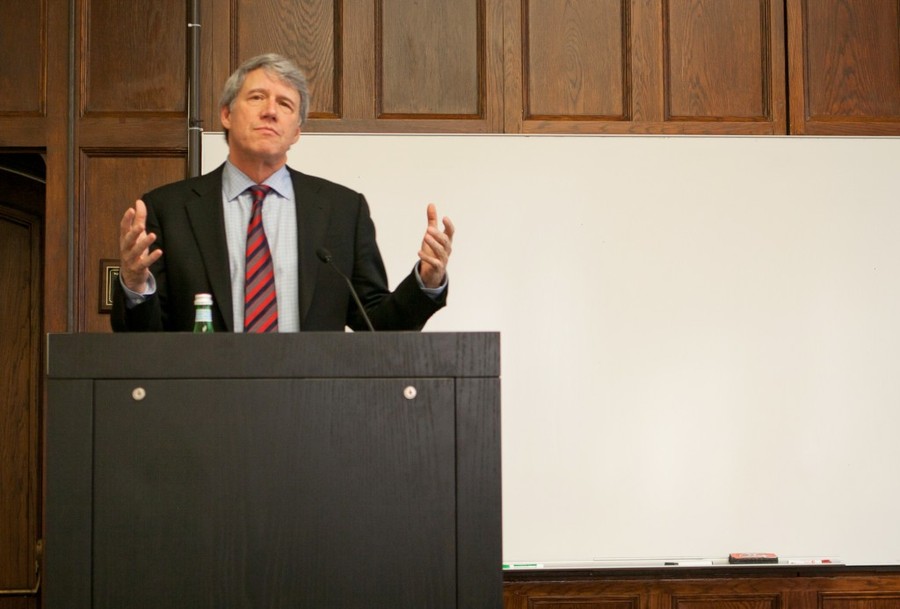 The University has tapped the campus’s most prominent champion of free expression to deliver this year’s Aims of Education Address, a University spokesperson said Saturday.

Geoffrey Stone, a Law School professor who chaired the committee that drafted the University’s high-profile statement on its commitment to the freedom of expression, will address incoming first-years during orientation week in the 54th annual address on the meaning of liberal education.

Stone decided to focus on freedom of expression the last time he gave the Aims of Education address—in 1995—when he said, “Today, the principal challenge to academic freedom turns on issues of so-called political correctness.”

Stone’s position has not changed much since then—the 2015 report by the Committee on Freedom of Expression, which has been adopted by Princeton faculty and Purdue University’s board of trustees, states that “it is not the proper role of the university to attempt to shield individuals from ideas and opinions they find unwelcome, disagreeable, or even deeply offensive.”

The news comes at a time when the University is amping up its messaging on its commitment to free speech—on Wednesday, incoming first-years received a letter from Dean of Students John “Jay” Ellison, in which he condemned trigger warnings and intellectual safe spaces.

The News Office told The Maroon in an e-mail that all returning students will receive a copy of Dean of the College John W. Boyer’s monograph on the history of the University’s commitment to the freedom of expression, which was sent to incoming first-years with Ellison’s letter.

“If we refuse to offer trigger warnings or to silence those with controversial opinions, it is not because we think less of individual sensitivities, but because we believe so strongly in the intellectual energy of our students and in their ability to contribute meaningfully to discourse by confronting and reasoning with unfamiliar ideas,” reads the monograph. “The University does not regulate student speech…. Nor do we engage in censured practices, such as ‘trigger warnings’ or ‘safe spaces,’ that would treat our students as being incapable of tough-minded and independent judgment.”

President of the College Republicans Matthew Foldi also posted screenshots online of an e-mail from Ellison to a student in which he allegedly wrote that all returning students will receive a modified version of his free speech cover letter upon arrival on campus this Autumn. University spokesperson Jeremy Manier said that he did not think this version of the cover letter had been written yet, and Ellison was not available for comment because he is out of the office until September 2.

The Provost’s office is also asking the newly created faculty Committee on University Discipline for Disruptive Conduct to “provide recommendations for educational programming on the importance of freedom of expression, fostering understanding among students that their right to free expression is the same right that they and we must accord to others,” after a year in which talks on campus by a pro-Israel Palestinian human rights activist and the sitting Cook County’s State’s Attorney were interrupted by protests. The recommendations are due by December 31 of this year.

Stone was not immediately available for comment on the announcement, but he spoke to several news outlets last week in the wake of Ellison’s letter.

“We didn’t feel we were doing something, internal to the University of Chicago, that was in any way radical or different,” he told the New York Times, “but my guess, if you asked most of these institutions 10 or 20 years ago, they would have said more or less what we said in our statement.”

“The right thing to do is empower the students, help them understand how to fight, combat and respond, not to insulate them from things they will have to face later,” Stone told the Chicago Tribune.

“The student reaction in general to the university policy has been extraordinarily enthusiastic,” he said. “Chicago has long defined itself as an institution that is deeply committed to academic freedom, or free expression. People who come here know that, they take pride in that and frankly people who I think are intimidated by that sensibly choose to go somewhere else.”

The annual Aims of Education address will be given during O-Week, but the University has yet to release the specific date and time.

College Republicans defended the University's stance in a debate on Tuesday against members of the Chicago Debate Society.