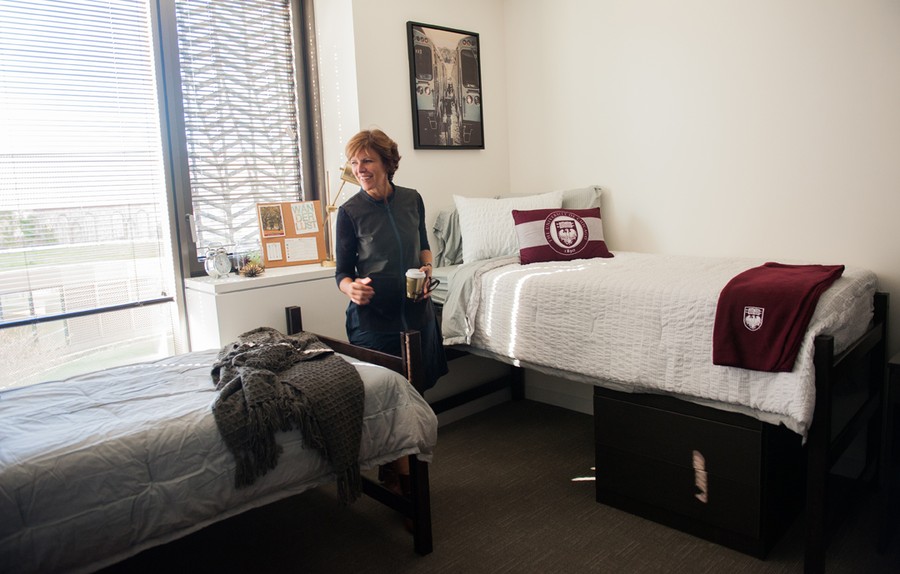 Jeanne Gang, the architect behind the campus's new dorm, sits in a Campus North bedroom.

Set to house 800 students and the Frank and Laura Baker Dining Commons, North is composed of three residential buildings and a dining hall.

Baker Dining Commons occupies a low-rise building in the center of the complex. In addition to eight house tables and a separate seating area, two private dining rooms can be used for special events and student groups. Baker’s entrance is located on the outside of the building, accessible to all students.

The three residential buildings—of five, 11, and 15 stories—are connected by a spacious second floor, which Gang called “the connective tissue” of the building. The second floor contains common areas, study spaces, and music rooms. It also opens onto two rooftop courtyards.

Each house occupies its own three floors. At the center of every floor is the house lounge, or, as Gang referred to it, the “house hub.” Each lounge’s three-story atrium features a wide staircase with colored cushions and a blank wall for a projector. Lounges also have a kitchen and small dining table.

Gang emphasized the importance of house life in the design process. “The house hub is the kernel that generates all of the dimensions,” she said, also noting that each house is delineated by horizontal white bands on the buildings’ façades.

There is a mix of living arrangements within each house. The rooms closest to the house lounge are doubles and will be mainly occupied by first- and second-years. As one moves away from the lounge and down the hallway, there are more singles. Resident Head and student apartments occupy each end of the floor.

“As you become more senior in your tenure here you have more private space,” said Clark. The University has been trying to retain more upperclassmen in on-campus housing.

A reading room and a multipurpose space occupy each end of the tallest tower’s penthouse, with sweeping views of the skyline, lake, and campus.

While North’s tallest building rises 15 stories over 55th Street, its ground floor retail promotes an active streetscape. Insomnia Cookies, Timbuk2, and Heritage Bicycles occupy two of the four sidewalk retail spaces. According to Clark, the University is nearing a lease agreement with a restaurant that will occupy the vacant corner space, possibly opening by next January.

Dollop Coffee Co., which opened on Monday, is located on a public walkway that bisects the building complex. A plaza at the corner of 55th and University Avenue leads to the walkway, which cuts under the complex and curves its way through a landscaped lawn extending to the Smart Museum and Greenwood Avenue.

Pierce Tower—the dorm occupying the site before it was torn down in 2013—had an uninviting loading dock on the corner of 55th and University. “Now [the corner] is a total portal into campus,” said Gang. “A lot of students live off campus to the north. They’re going to probably take this shortcut everyday.”

At the opening of the tour, Zimmer said, “We wanted [North] to clearly reflect the openness to the community of Hyde Park and beyond that we have been striving for. In the old days, the University of Chicago campus was built facing only inward, and here we wanted something that had both an inward component and a welcoming outward extension.”

Clark echoed Zimmer’s remarks as he praised North’s potential to balance private and public, inside and out. Public space “bisects [North] and goes right through the middle, but there’s still private courtyard spaces for residents,” he said.

The $148 million dorm joins the University’s spate of new construction projects, which Zimmer has defended as a strategy to spend while interest rates remain at historical lows. Recent protests over administrative budget cuts have objected to the University’s spending on other priorities. On Monday, though, the spotlight was on Gang and her shining new contribution to campus.

Gang’s architecture firm has won commissions all over the world, but she has an “affinity” for Hyde Park because of its leafy streets and ample green space. City Hyde Park—a new rental tower coupled with Whole Foods on Lake Park Avenue and Hyde Park Boulevard—is also a Studio Gang project.

While Gang said North’s curved façades take a cue from many of campus’s neo-gothic buildings, the building complex is anything but passé. With green roofs, shaded windows, rainwater storage, and bird-friendly window screens, North aims to be environmentally conscious—literally. Residents will be able to control their windows’ sun exposure with in-room controls and monitor their energy usage. Gang mentioned the possibility of competitions to crown the most energy-efficient house.

Clark and Gang emphasized the amount of student involvement in the dorm’s architecture, as focus groups and workshops took place before and during the design process. “From the big reading room to the amount of book space,” said Clark, “students were part of [the design] from beginning to the end.”

Upon hearing Clark’s remarks that retail options were especially catered towards students, Gang quipped, “Like those cookies?”
While Resident Heads and Masters have already moved into North, students have yet to populate its halls. Once it opens its doors this Saturday, however, the second floor common areas and penthouse reading room lie past the front desk, so residence—or a friend—in North will be necessary to gain access.

One of the eight houses will be named for Dean of the College John Boyer.