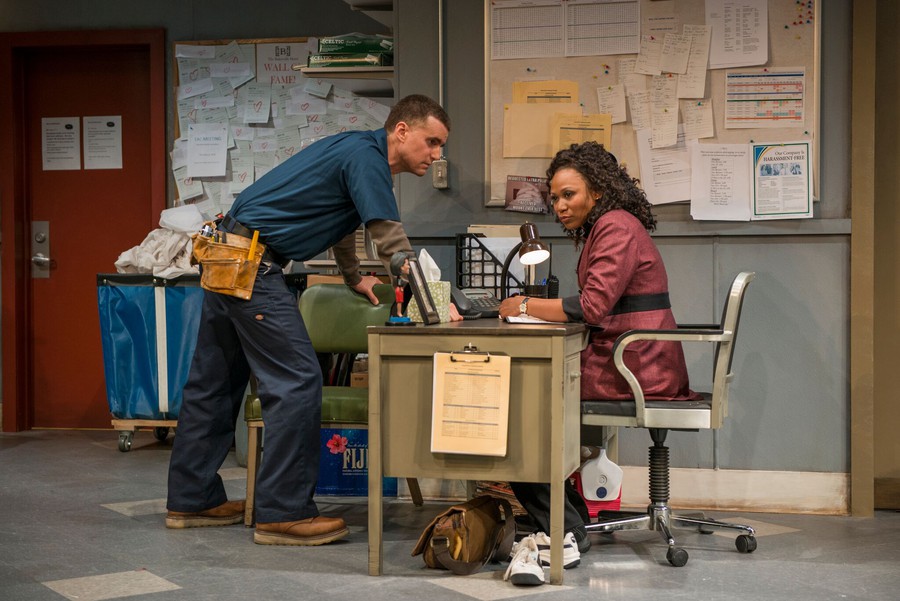 Lorenzo (Armando Riesco) and Millie (Alana Arenas) bring the trope of deeply flawed characters to a whole new level—and in "The Fundamentals," they're in good company.

The Fundamentals, a new play running at the Steppenwolf, follows Millie, a young woman of color trying to raise her daughter, maintain her marriage, and move up from her housekeeping job. Sounds fresh, right? Try again.

At the start of the play, we find Millie (Alana Arenas) in the employees’ quarters of a luxury hotel; she has been recently passed over for a promotion because she’s too good at her current job and is meeting the young, white, 20-something who was hired instead. We meet Millie’s coworker, Abe (Alan Wilder), who has worked in the same job for 30 years, her husband Lorenzo (Armando Riesco), immature but sincere, and Eliza (Audrey Francis), the corporate manager and evil incarnate.

Up to this point, The Fundamentals is set up for a thought-provoking play. The characters are parodic and often funny, but rooted in real situations that I hoped would lend meaning to their actions.  Before getting anywhere, however, the play chokes on its own plot.

Soon after the start, Millie faces her first choice between getting ahead and supporting a person she cares about: should she rat out the front desk worker who’s running a prostitution ring out of the lobby or let another potential promotion slide? A few scenes later—should she rat out her husband? What about Abe?

Though the particularities changed, the same situation arose over and over again, and the choice was always the same: be a good person or help yourself. In the universe of this play, it seemed, these two were always mutually exclusive.

In addition to this first implausibility, everyone—and I mean everyone—was ready to throw someone under the bus, either out of malice or ambition. Millie, the principled friend? Yep. Abe, the generous coworker? You bet. All values and morals were forfeited, and often for no ostensible reason. As if life were only cruel, people only bad, and success only remorseful.

Of course, the choice between supporting others and helping yourself is a reality and often a desperate one. This is particularly true when one is a woman, a person of color, and a member of the working class. But these circumstances, which might have given weight to the repeated ultimatums, seemed to evaporate as the plot unfolded. Considerations of class, race, and gender were employed when they were convenient to the plot and forgotten when they were not.

I did enjoy The Fundamentals. The mockery of corporate life, particularly Audrey Francis’s Eliza, was hilarious, and there were many small moments of truth among the chaos. But as with any other narrative that relies so heavily on plot and so little on significance, after one performance I felt I’d seen it all.

The Fundamentals ran at the Steppenwolf Theater through December 23. Tickets are $15 for students.