The Newberry Consort takes to the Logan Center with the music of 14th Century poet, composer, and diplomat Oswald von Wolkenstein, a true Renaissance man. 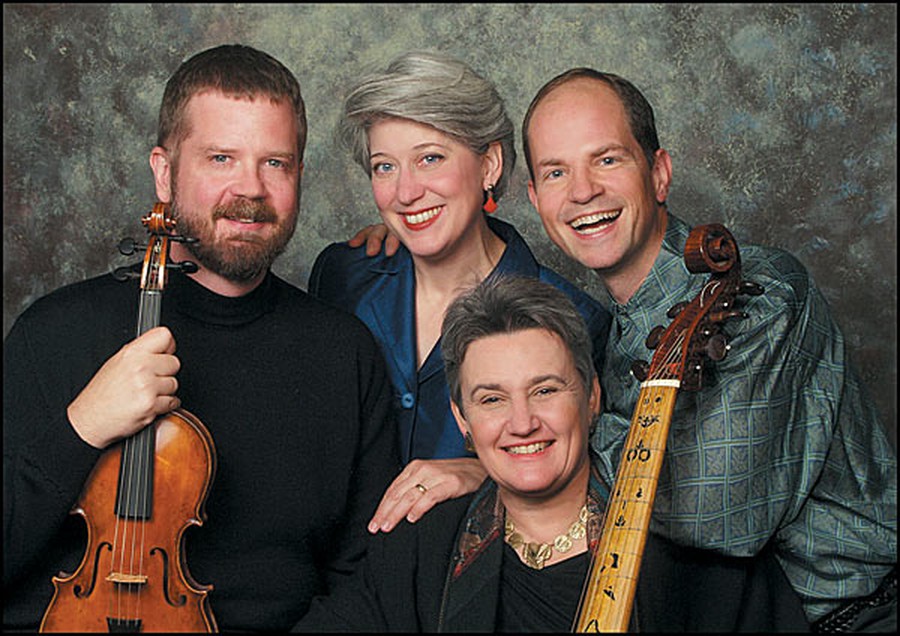 The original members of the Newberry Consort (David Douglass, Ellen Hargis, Mary Springfels, and Drew Minter) reunite for a concert at Logan Center.

The Newberry Consort is continuing its 30th anniversary season with the music of a true Renaissance man: Oswald von Wolkenstein, a poet, composer, and diplomat from the late 1300s. On January 14, this University ensemble-in-residence will be at the Logan Center to share the music and words of this important historical artist.

Von Wolkenstein’s music, which he wrote to accompany his poems, falls just between the Medieval and Renaissance periods, says David Douglass, co-director of the Consort along with Ellen Hargis. Unlike that of his contemporaries, von Wolkenstein’s music plays with dissonance in a strikingly progressive way for its time.

Douglass curated Saturday’s arrangements, all of which are from von Wolkenstein’s original manuscripts, to help the audience hear how this music paved the way for Renaissance music. He sought to emphasize polyphony, a feature of Renaissance music that separates it from its Medieval predecessor. He also wrote parts for musicians—who will be using period instruments—that will allow them to improvise in a Renaissance-appropriate style. Improvisation, a feature commonly associated with jazz, is actually a defining characteristic of early, pre-Baroque music.

As with many Newberry Consort concerts, Saturday’s performance will feature supertitle translations of the corresponding poetry. The poetry provides listeners a keen view into von Wolkenstein’s personal life.

“Oswald is very special in that he wrote poetry and songs about the battles he was in, his love affairs, times that he was betrayed by his lovers; a lot of it would make for good television,” Douglass said. “He was an important historical figure, being a diplomat and a soldier, and he was at a number of important events of the time, which are all chronicled. In the songs, you can find out how he felt about it all.”

“Mary was in the original incarnation of the ensemble, and [at the time] put together a German program called ‘Wanderers’ Voices’ that included a lot of Wolkenstein. That was one of my first opportunities to work on that repertory, so I thought this was appropriate repertory to bring her back for,” Douglass said.

This special anniversary season has abounded with guests, including a collaboration with renowned Elizabethan performance expert Steven Player earlier this year. Douglass said the Consort is looking forward to increasingly elaborate performances in the coming years. As awareness and demand for early music has increased, the Consort is putting on concerts that are much more theatrical, creating a more complex viewing and listening experience for eager audiences.

Earlier this fall, the Ear Taxi festival, a multi-day celebration of Chicago’s new music scene, achieved stunning success. Yet it would appear that Chicago music lovers have an equally ravenous appetite for early music—an appetite that spans the centuries.

“There’s been a definite trend [toward increased interest in early music] all over the country, and we’ve seen that in Chicago as well,” Douglass said. “In many ways, early music is new music. It’s not really of our time, it’s just something new that’s being done that just happens to be old. In fact, there are a lot of composers now writing for early instruments, which is a really happy thing to see.”