Away Weekend Ends in Wash for Chicago 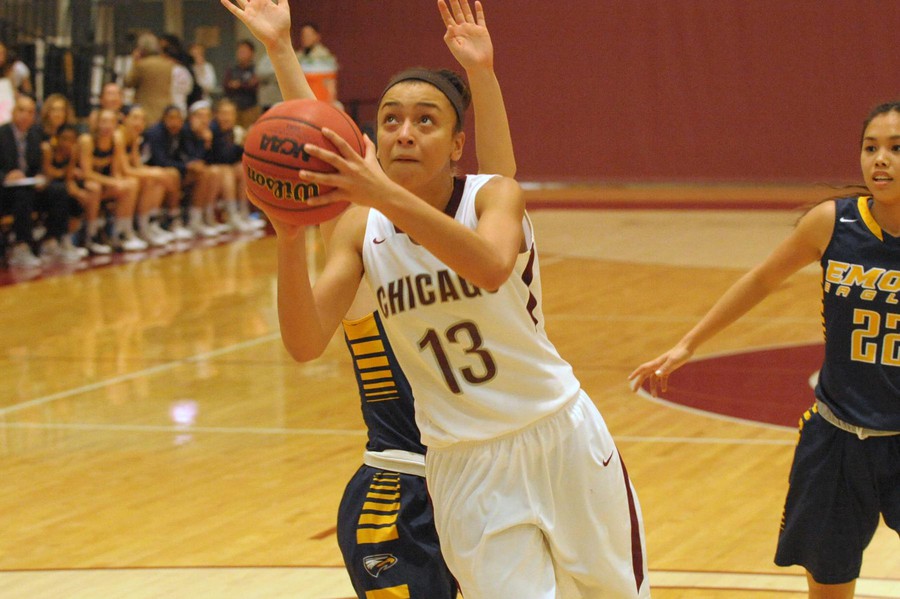 After flying 1,852 miles in just four days, the Maroons finished the first UAA weekend of the season 1–1. The squad improved to 9–5 on the year and 2–1 in conference play. The first game of the week took the South Siders to Rochester, NY, to take on the Yellowjackets, while the second flight led to Atlanta, GA, and the Eagles of Emory.

The team was riding high after a win over previously undefeated No. 5 Wash U on January 7. This feeling seemed to carry the Maroons into the weekend, as they managed to continue their streak of knocking off top competitors in the form of No. 22 Rochester. Not only did the Maroons beat the Yellowjackets, they defeated them by 16 points, which was the biggest loss of the season for Rochester.

“The energy was incredible,” fourth-year Stephanie Anderson said. “We came out ready to play and we really wanted this win. We wanted to show people that beating a top team like Wash wasn’t a fluke, that we can do it multiple games in a row.”

Anderson was certainly part of that movement, as the fourth-year contributed in every significant statistical category: 12 points, five rebounds, five assists, and three steals. The Maroons made this game a team effort, as five players scored in double digits. Most notably, first-year Miranda Burt had 18 points and was 9-for-9 from the free-throw stripe.

The next game, however, did not end so favorably for the Maroons. “Emory is a really dangerous team,” Anderson said. “They are very scrappy and can claw their way back into any game.” The Eagles did just that, owning the rebounding statistic especially late in the game when the South Siders just needed a free throw box-out to seal the deal.

Pacing the Maroons was fourth-year Britta Nordstrom with 18 points, while first-year guard duo of Burt and Mia Farrell each chipped in 10. It wasn’t enough to stop the Eagles, however, as Emory second-year Ashley Oldshue and fourth-year Shellie Kaniut combined for 39 points. Also dooming the Maroons was a paltry 50 percent free-throw percentage.

Anderson remains optimistic, however. “This weekend is the toughest travelling trip in the UAA, and we managed to escape 1–1. While the Emory game was definitely one that could have won, we still aren’t out of the UAA Championship race with this loss,” she said.

Truer words were never spoken. While the UAA has, in years past, been dominated by the Bears of Wash U, who usually only lose a game or two, this year the conference championship is up for grabs. There is a five-way tie at the top, with Carnegie Mellon, Rochester, Brandeis, Case Western, and Chicago vying for first.

“It’s obviously disappointing to realize that we could have been alone atop the standings if we had beaten Emory. But an important takeaway for us is that if we play our game and play hard for 40 minutes, we can beat anyone,” Anderson said.

Especially encouraging for the team is that these past two games saw the lowest turnover rate in several years, something that has doomed Chicago in the past. The Maroons will look to continue improving upon that number this week, as they get a break from traveling when they take on NYU and Brandeis at home this weekend.