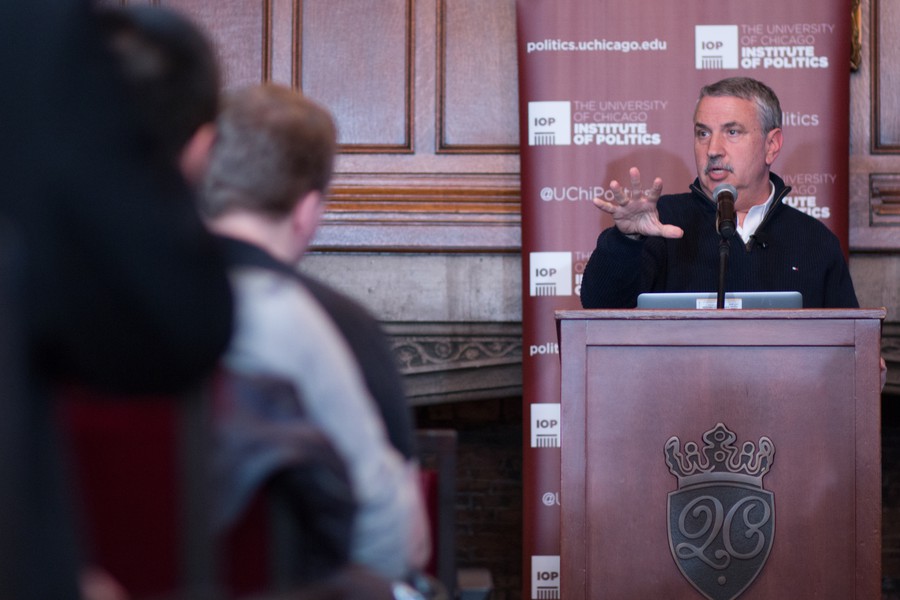 New York Times columnist and writer, Thomas Friedman talks about his new book "Thank You For Being Late:An Optimist’s Guide to Thriving in the Age of Accelerations" on January 12th at the Quadrangle Club.

Pulitzer Prize–winning New York Times columnist Thomas Friedman spoke on Thursday at the Quadrangle Club about his new book, Thank You For Being Late: An Optimist’s Guide to Thriving in the Age of Accelerations.

Friedman argued that contemporary political discourse is too partisan and rigid to permit the kind of hybrid, adaptive entrepreneurship needed to keep up with rapid evolution across social, cultural, and economic sectors.

The self-described “radical free trader and super-capitalist” called for a realignment of political ideology around “three nonlinear accelerations in the three largest forces on the planet…the market, Mother Nature, and Moore’s Law.” Moore’s Law refers to a projection made in 1965 by Intel co-founder Gordon Moore that the number of transistors per square inch on integrated circuits will double every year for the foreseeable future.

“All our parties are blowing up,” he said. “They are essentially designed to respond to the New Deal, the Industrial Revolution, the early IT revolution, and Civil Rights—both gender and race. And I believe what politics has to be about today is how you respond to these three accelerations.”

Friedman said his political views are to the left of Bernie Sanders on some issues, like his support of single-payer health insurance, and to the right of the Wall Street Journal editorial page on others, like taxation. He wants to abolish all corporate tax in favor of a carbon tax, a tax on bullets, a tax on sugar, and a small financial transaction tax.

Friedman said 2007 was a critical moment for technology, listing the year’s numerous technological breakthroughs, including Steve Jobs’s unveiling of the first iPhone, Facebook opening its platform to anyone with an e-mail address, and the launch of Hadoop, a product that allows for the processing of huge data sets.

These developments, along with the popularization of cloud computing, led Friedman to call 2007 “the single most important technological inflection point since Gutenberg invented the printing press.”

Turning to the new ethical challenges of the digital age, Friedman said governments will need to “scale the Golden Rule,” because “we have never been more God-like and we have never lived in a realm more God-free.”

Friedman referred to the recent Russian hacking of American intelligence as an example of the ethical challenges posed by technological development. “Cyberspace is a realm where we’re all connected but no one’s in charge. There are no stoplights in cyberspace. No judges, no courts, no 1-800-please-stop-Putin-from-hacking-my-election,” he said. “We now live in a world where more people can do unto you, from farther away, than ever before. Putin just did unto us.”

Acknowledging that his support of the Golden Rule could be dismissed as naive, Friedman insisted that “what’s really naive is thinking we’re going to be OK in a world of this much amplified power, where we now spend this much time in a realm where we’re all connected and everyone’s in charge, if we don’t scale the Golden Rule. Now, that’s naive.”

He quoted physicist Amory Lovins, who, when asked whether he is an optimist or a pessimist, answered, “I am neither, because they’re just two different forms of fatalism. Everything will be great! Everything will be awful!” Instead of blind positivity, Friedman likes to adopt Lovins’s model of “applied hope.”

Friedman looks for that hope at the individual and community level: in efforts for racial integration in his increasingly diverse hometown, St. Louis Park, MN, and in the inventions of young entrepreneurs in STEM fields.

“If you want to be an optimist about this country, stand on your head. The politics look so much better from the bottom up than from the top down,” he said.