The schedule included an activism fair and an exchange of books on radical politics. 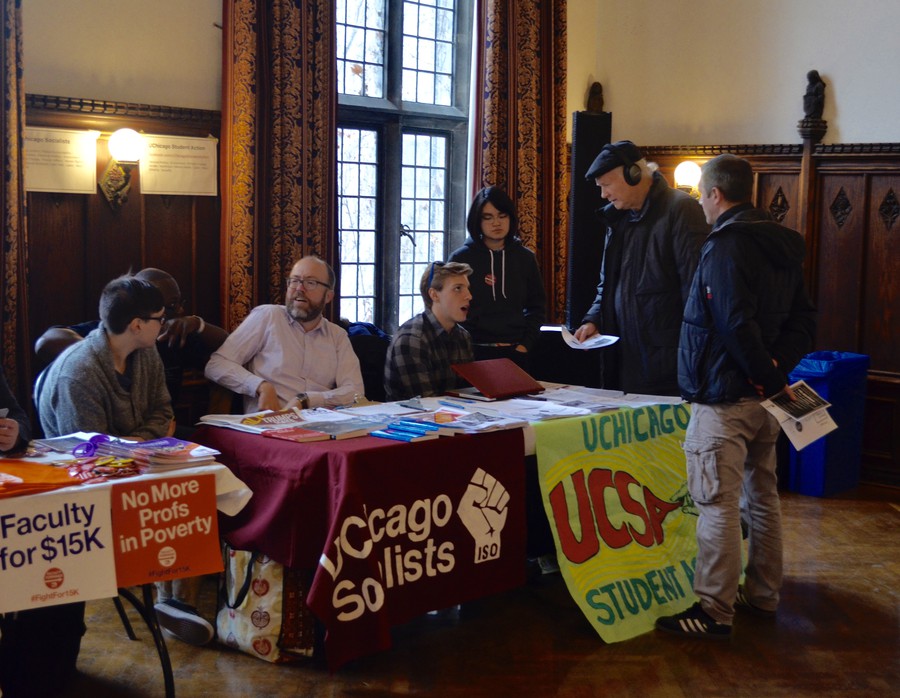 RSOs and off-campus organizations held booths at the Re:action event.

More than 35 organizations held booths at an activism fair Thursday as part of Re:action, an event meant to coincide with the upcoming presidential inauguration of Donald Trump.

The six-hour event was jointly hosted by the Center for the Study of Race, Politics, and Culture (CSRPC) and the Center for the Study of Gender and Sexuality (CSGS). The event’s website describes it as “a day of resistance and rebuilding, an event designed to reconnect and reinvigorate our community by sharing resources and opportunities for political and social action.” The schedule included the activism fair and an exchange of books on “radical politics, theory and history”, according to the website, held in the Ida Noyes Hall Cloister Club. The event also featured a “Movement, Meditation, and Mindfulness” workshop hosted by the 2016–2017 artist-in-residence Lauren Ash, and a film screening. The film was followed by a party with food and a live DJ.

According to Gina M. Olson, who helped organize the event and serves as the AssociateDirector of the CSGS, the idea for the event started as a “counter-inaugural” in response to what she and the other organizers agreed was a negative climate fostered by bigotry during the presidential campaigns. Members of the CSGS and CSRPC eventually decided to focus on connecting students motivated by the outcome of the election to activism organizations. “What we felt we could do would be to serve as a bridge between people who are feeling the effects of this election, having gone through a very brutal campaign, and to take all that we’re feeling and thinking and put that into action,” Olson said.

At the fair, activism-oriented RSOs and some off-campus organizations held tables with flyers and sign-up information. Participating organizations included Sex Workers Outreach Project, Black Youth Project 100, Graduate Students United, and the Council on American-Islamic Relations. After the activism fair, participants moved to the Ida Noyes library to watch American Revolutionary: The Evolution of Grace Lee Boggs. Boggs was a writer, activist, and philosopher known for her role in the Civil Rights movement and various other activism campaigns. She also worked at the University of Chicago’s philosophy library during the 1940s.

Jaclyn Wong, a University of Chicago doctoral candidate and the representative at the fair for U ofC Resists, felt that the fair was a productive environment to foster communication not just with students but also between organizations working in similar fields. U ofC Resists is a group started in response to Donald Trump’s electoral victory that has organized several events to protest his positions. “People don’t know what’s going on with each other when they’re coming from disparate groups on campus, and in the wider Hyde Park community,” Wong said. She explained that this makes it important to build a network for local activists.

Olson said that the event had been planned for the day before the inauguration to encourage attendees to participate in other activities related to the inauguration, including the Women’s March on Chicago on Saturday. “There’s a lot going on this weekend, and we want people to be able to participate in those things. We see this as a counter-inaugural, but also as a stepping-off point for people to be active in a lot of different ways,” Olson said.