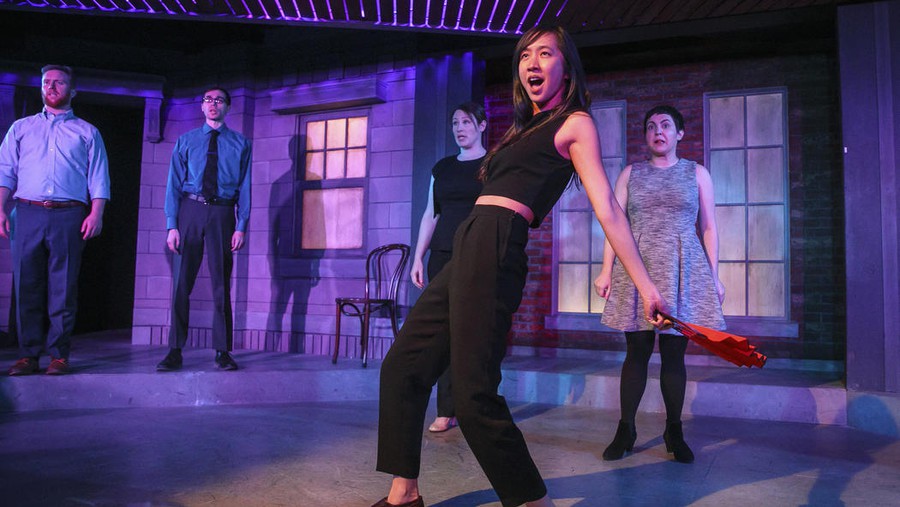 The Second City E.T.C. Theater’s new show is, to say the least, political. What else would you expect from a show released after the mess that was 2016, especially one called Fantastic Super Great Nation Numero Uno? The company’s 41st revue is billed as a show that finds the humor in humanity in an increasingly polarized world, and the cast embraces it so well there’s barely time to sip your drink between laughs.

Most of the jokes are directed at President-elect Donald Trump and his vision for post-inauguration America. An endless source of comedic material, many of the short sketches in Numero Uno are just re-imaginings of his direct quotes. There is a sexually aggressive kraken who took over an Australian cruise ship, a low-budget commercial for a discount birth control superstore, and an eerily plausible interaction between two inept immigration officers and a Spanish-speaking immigrant. The cast doesn’t spare his administration either—one of the best sketches is an ad for the “Gay Away” program, which uses “real science” from “researchers” like Mike Pence. This skit claims perhaps the best line of the entire show: comedienne Julie Marchiano says, “Before Gay Away, I used to look at Georgia O’Keefe paintings. Now I only watch the Steve Harvey Show.”

Trump is not the only butt of the political jokes, though. An energetic boy band of celebrity Russian hackers sings and dances about spreading fake news in the States. Former president Jimmy Carter even makes his own reality show—because if a reality star can become president, so can the reverse.

The actors in Numero Uno turn the mirror on themselves and the audience, making fun of the ridiculousness of 21st-century culture in America. Racist assumptions about minorities’ backgrounds are checked through an uproarious song and dance routine, competitive television shows are parodied to an absurdly accurate degree, and hormonal pre-teens show off their moves with a stripper-themed bar mitzvah party.

In typical Second City fashion, the audience interacts with the crew throughout the performance. Before the start of the show, staff placed little slips of paper with questions on every table. The questions tackled topics ranging from current news headlines to more bizarre recent events. The audience’s answers were then collected and used as prompts for the comedians in the show.

Fantastic Super Great Nation Numero Uno is undeniably hysterical. Almost all of the jokes will split your sides with perfectly delivered punchlines. Second City’s new show is a prime example of why the company is so revered, and of how so many comedic greats get their start on its stage.

Despite the abundance of cough-inducing laughs (my apologies for annoying the people around me), however, the jokes regurgitated many expected punchlines from recent comedians and shows. The incoming 45th president of the United States, his administration, and all of the absurdity surrounding his personality have already been mocked countless times by various late-night shows like Saturday Night Live. Other comedians have already joked about how white Americans love to ask their Asian neighbors where they “actually come from.” Everyone knows the joke about how middle school boys are less mature in health class than their female peers (even if the trope does use the hilarious nickname for a boy’s “yogurt cannon”).

But Second City does not distinguish itself with this overused material. After the year we’ve had, who wouldn’t want to write a comedy show? Fantastic Super Great Nation Numero Uno might go for the same gags as everyone else, but it certainly does them better. Despite everything going wrong in the world right now, the revue reminds us, in their show and in its final musical number, “there’s still humor in humanity.”