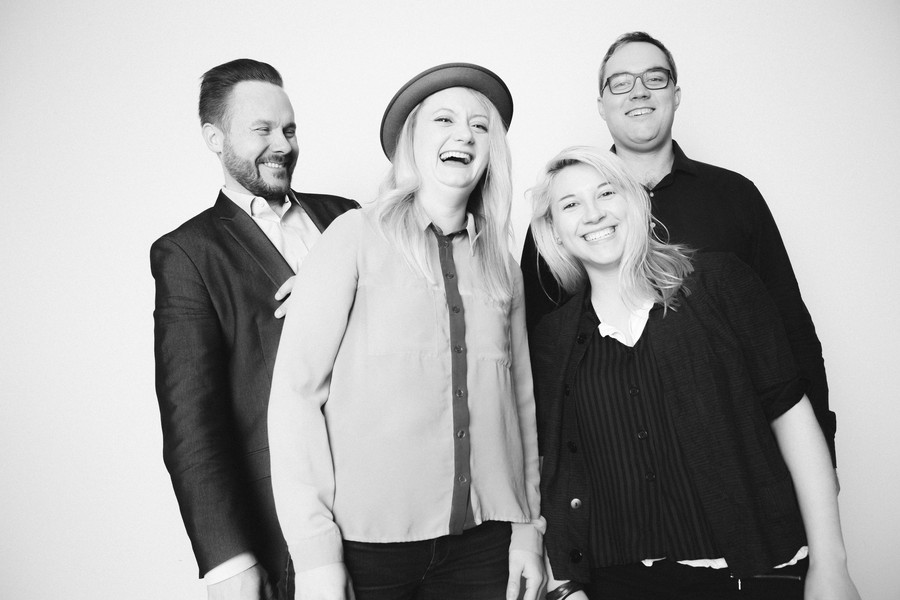 Life comes at the Spektral Quartet fast. After its founding in 2010, the group was named ensemble-in-residence of the University’s music department in 2012, came out with its first album in 2013, then welcomed violinist Clara Lyon in 2014. And that’s nothing to say of 2016, the year the group’s sophomore album Serious Business was released and nominated for a Grammy, and in which it underwent another changing of the guard: the hiring of 23-year-old violinist Maeve Espy Feinberg following the departure of founding member Austin Wulliman.

In advance of their Friday concert on campus—also Feinberg’s formal debut with the quartet—the Maroon sat down with the Spektrals in Logan Café to talk about the journey so far. 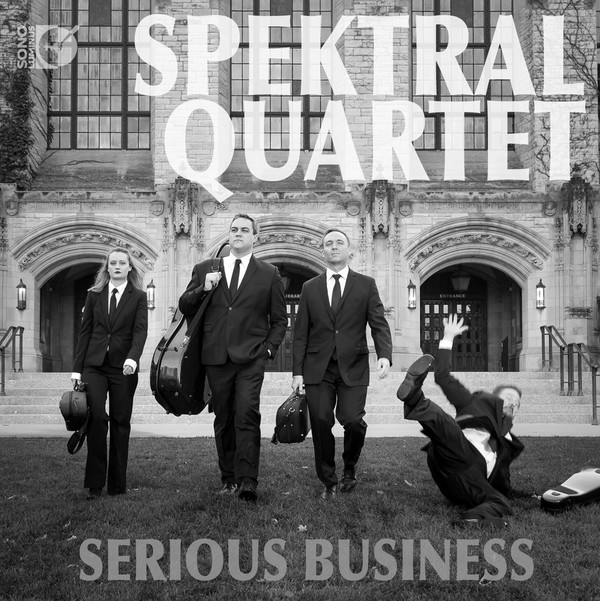 Spektral Quartet's Grammy-nominated album Serious Business is anything but.

Chicago Maroon: First of all, congrats on your Grammy nomination! Where were you all when you got the news?

Russell Rolen: I was sitting patiently at the breakfast table while my son took an hour to eat his eggs in the morning.

Clara Lyon: How patient were you?

Maeve Feinberg: “I have a Grammy nomination, and you can’t even eat your eggs?” [laughter]

RR: Anyway, my phone pinged with a message from the guy who runs our record label. That was a good text message to get.

Doyle Armbrust: I think our hopes were, like…not even nonexistent, because the chamber music category is, if not the biggest, then one of the biggest in the classical umbrella—some 250, 300 albums. We weren’t expecting anything, so getting that text message was a big surprise.

Chicago Maroon: Spektral seems like such a Chicago fixture that it’s kind of astonishing to put things into perspective and realize that you’re still a pretty young quartet. You guys started up, what, ’09?

RR: We started playing together in ’09, but the first concert we gave as Spektral Quartet was late 2010.

DA: It was very enthusiastic and very out-of-tune. [laughs]

Chicago Maroon: So now I want to turn to Maeve, and ask what it’s been like having her come on board. What about her clicked?

DA: The worst! [laughter] Well, one thing that’s been clear for us is that our identity outside of Chicago has been based on our new music playing, and we’re really eager to get [at] what our actual mission is, which is the conversation between new and old. New music [requires] a really specific skill set, and there’s not an overabundance of people that do that, especially at a really high level. We started out by thinking we have to find a new-music person, but as we went through the process, we realized that we had a real appetite for someone who could help us build our traditional [repertoire]. That’s what was really exciting with Maeve coming in: we found someone who felt as exuberantly about new music as traditional music and was playing both at a really high level.

Chicago Maroon: And Maeve, what was it like on your end?

MF: It was great. I’m so fresh out of school that I haven’t taken a lot of auditions, so I haven’t been through the process a ton of times and don’t know what to expect. But like they said, when you play with someone for the first time, you can get a sense pretty early on if your basic outlook on music is in touch. Plus, when you meet people you get along with personally as well as musically, you just play better. And it’s not as though it was a very austere, scary process.

DA: The interview portion was always an over-dinner-and-drinks kind of thing. Because sure, there’s a lot of competing things you’re trying to find in one person, but there’s a really important part of this, which is: If you got stuck in Snowmageddon on Lake Shore Drive, would they still be alive at the end of those six hours?

CL: Or would you?

RR: Or would you get in the car with them in the first place?

MF: And they need to like driving me, because I don’t have a license!

DA: In other words, if you’re going to be on the road with this person for 10 days, would you still want to hang out with them?

RR: And we gave Maeve some rep to play that we knew wouldn’t be something we could all play right away. We wanted to challenge ourselves with something that made us work and solve problems together.

Chicago Maroon: Maeve, I hear you chuckling over there. What did they give you?

MF: There was a piece that, um, involved singing.

Chicago Maroon: Ah—The Ancestral Mousetrap [by Dave Reminick], from Serious Business. Let’s talk about the CD for a minute, actually: What went into making that album?

RR: We were invited to the Walden School, which is a summer festival for young composers [in New Hampshire], in 2014. That’s where we played Many, Many Cadences by Sky Macklay, who’s on faculty there, and we loved it immediately.

DA: Well, we hated it, then we loved it.

RR: Yeah, it’s ridiculously hard to play. We cursed her name many times. [laughter] Anyway, around the time Clara joined, we had a meeting and hatched this album. It’s because we knew we were going to have Mousetrap and Chris Fisher-Lochhead’s piece [Hack], which is based on standup comedians. It also became apparent that Sky’s piece is quite funny, since it turns tonal music on its head. So we realized we definitely had something in the works there for a theme.

DA: It felt like a natural fit, too, because Austin, Russ, and I listen to a lot of comedy podcasts, and humor is often the device we defer to in rehearsals when things get difficult or tense.

Chicago Maroon: And Mousetrap, as Maeve alluded to earlier, is pretty gnarly, since it requires you to sing and play at the same time.

RR: You know, lots of musicians sing and play, but there’s something different about this kind of prep. None of us are trained singers, so we also had to get over that hurdle of self-consciousness. Plus, Dave’s music is quite complex: the rhythms are off-kilter, and the melodies he has us sing are disjunct. Then that’s all layered on top of each other. So we started very slowly.

DA: Is that the piece we spent the most rehearsal time on? I think so, by a long shot.

CL: Yeah, and Sky’s [Many, Many Cadences] is up there too.

Chicago Maroon: So, I have to ask: Doyle, why is it you who’s biting the dust on the CD cover? Is it a viola thing, or…?

DA: There were a lot of things that went into that cover. We wanted to riff off of the iconic Guarneri Quartet picture of them coming out of a neoclassical building and hailing a cab. I was in charge of getting the photo stuff set up, and had an interesting gaffe—

CL: It wasn’t really your fault…

DA: There was a miscommunication between us and the label about when they needed final cover album artwork, and they basically called us and said, “We need this in three days.” So we went to Northwestern at like six in the morning, and the weather’s holding, and the temperature is reasonable. Then, just as the photographer gets there, all the sprinklers come on on the lawn at Deering Library. That limited the number of falls we could do, because with each take I was getting more mud and grass on my back.

RR: But you asked why him, and the real answer is: because he’s a ham! He asked for that role. There was no way anyone else was going to do that.

Chicago Maroon: Let’s look ahead to this Friday’s concert, whose unifying theme is pizzicato [plucking strings]. You’ve got Beethoven’s Quartet No. 10, aptly nicknamed “Harp”; you’ve got the Ravel Quartet, with a second movement made famous by Wes Anderson; and you’ve got a recent work by Dai Fujikura, which kicks off with your instruments strummed “banjo-style.”

DA: Yeah. After Ear Taxi, which was super new music-heavy, we wanted to balance our season as best as we could on the back half of the season. This concert is one where we really want to focus on traditional pieces.

RR: And they’re masterworks of the repertoire, too. We’ve been swimming in Beethoven and Ravel lately, which has been fun.

DA: One thing we’re really looking forward to for this concert is that it’s kind of Maeve’s coming-out party—her full debut.

MF: My debutante ball! A tiara would be a nice touch.