Food truck owners and workers of Chicago Lunchbox and Aztec Daves explain the inspiration and aesthetic of their on-the-go meals. 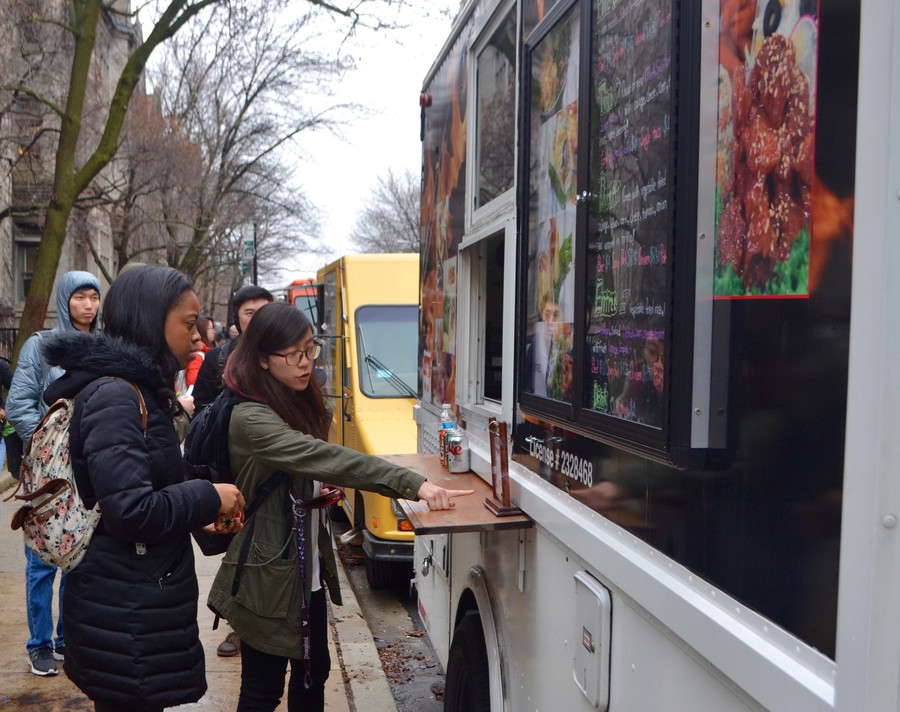 Students line up to buy lunch at a campus food truck.

Every weekday, roughly between the hours of 11 a.m. and 2 p.m., brightly decorated trucks gather in thin lines down South University and Ellis Avenues. Hungry students, faculty, and staff come up to their windows, buying banh mi or tacos, burgers or pizza, to eat at the spot or take back to their workplaces.

John Nguyen is the owner of Chicago Lunchbox, a food truck specializing in Asian fusion cuisine. He is Vietnamese-American, married to a woman from Thailand, and draws inspiration from his friends from all across East and Southeast Asia when preparing his dishes. He focuses on his “childhood favorite,” the Vietnamese banh mi, but also offers rice boxes, spring rolls, and chicken skewers, among other dishes.

“From the Panini to the Cubano to the French dipped—there is a sandwich that represents what mothers have made for lunch on every kitchen counter,” he writes on the Chicago Lunchbox website. He always wants to bring this taste of home to the street, especially on a food truck, which prepares food he considers “on the go, easy to eat.”

There is a reason why these food trucks have appeared to be very popular with the University population, whether hospital or university staff on their lunch breaks or students looking for something to eat while finishing their homework between classes. It makes sense to have lunch-on-the-go options for on-the-move people, and a food truck, never meant to stay in one place, seems to exemplify this fast-paced lifestyle. It might be easy, then, to assign a stereotype to food trucks—and street food in general—as highly impersonal.

Yet food truck owners often see a domestic aspect to their cooking. Ramon Torres works in Aztec Dave’s, “the elite authentic Mexican food truck,” and stresses the personal aspect of his work. “We want people to feel that they’re coming into our home and eating at our table,” Torres said.

Aztec Dave’s is a family-owned enterprise, and family is at the center of everything Torres does. “We have leaders in my family, I would consider myself a leader; my dad’s a leader,” Torres said. His recipes are based on those of his grandmother, from Michoacán.

Although food truck recipes often stem from family recipes, reflecting their owner’s heritage, they frequently also incorporate more modern techniques, flavors, and ingredients. Bob Cha features bulgogi tacos, while La Boulangerie named one of its French-style sandwiches after the state of Wisconsin. Even Nguyen isn’t interested in representing his childhood dishes exactly. “I want to steer away from the traditional banh mi,” Nguyen said.

Some of this is the result of cooking in a confined space in a short amount of time, but that alone cannot explain the tendency toward inventiveness and creativity displayed. Even the designs on the sides of the trucks reflect the same mix of old and new tradition that is evident in their menus, from the brightly colored Aztec calendar design on the side of Aztec Dave’s to the traditional American-style pin-up on the side of Lucy’s food truck. Menus frequently allow for mixing and matching, giving customers greater control over their meals than the average sit-down restaurant.

Perhaps this is due to the immediacy of a food truck lunch—the “on-the-go” meal that might appear impersonal at first blush.

Though food trucks are “on-the-go,” they’ve solidified their presence on campus and are here to stay.