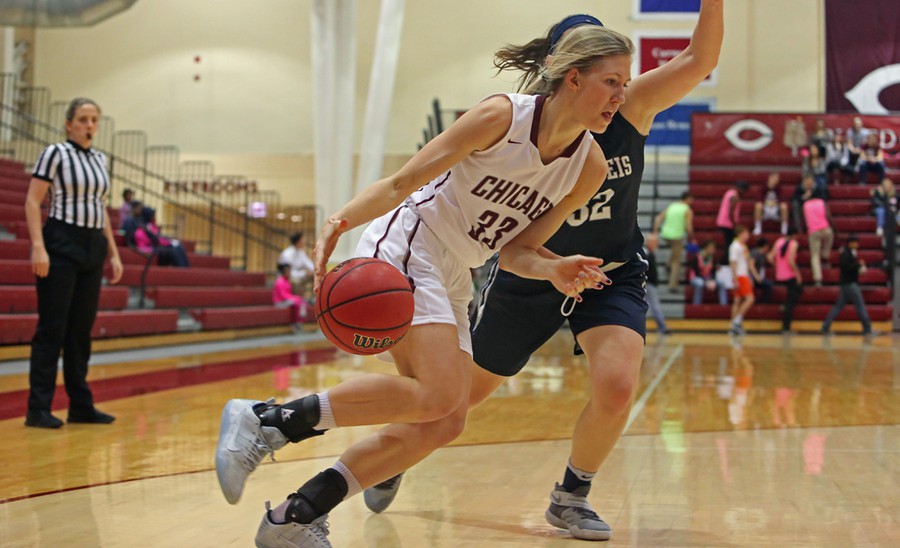 Fourth-year Britta Nordstrom makes a drive to the basket.

After winning four of their first five conference matchups, the South Siders looked to continue their dominance in a Friday night battle in Cleveland against Case Western Reserve University. However, it was the host Spartans that had the final word, rallying in the fourth quarter to edge the Maroons by a score of 80–78.

The two UAA heavyweights were in a battle from the opening tip. In a first half full of lead changes, first-year Miranda Burt sunk a three-pointer with 21 seconds remaining to cut the Spartan lead to 33–32 at intermission. Fourth-year Britta Nordstrom got rolling early, posting 12 points in the first twenty minutes of play.

The Maroons came out of the locker room on a mission, outscoring Case Western 24–16 in the third quarter. However, the seven-point advantage after three quarters was not enough for the Maroons. Lighting up the scoreboard for 31 points in the final 10 minutes of action, Case Western surged back to reclaim the lead. Weathering a late Chicago run, the Spartans held on to knock off the visitors.

Nordstrom led the Maroons offensively with 20 points and six rebounds on the night. Fourth-year Stephanie Anderson and first-year Taylor Lake also chipped in 12 points each for Chicago.

On Sunday, the South Siders were back on the hardwood to face ninth-ranked Carnegie Mellon University in a true UAA road test. With a chance to regain first place in the conference, Chicago’s stifling defense proved to be the difference. Picking up their third straight victory over a ranked opponent, the South Siders defeated the Tartans by a final score of 81–61.

Guided by Nordstrom’s 25-point effort, the Maroons captured the lead early and never looked back. Lake got off to a hot start, scoring 10 of her 15 points in the first 20 minutes of action. Building on a 10-point halftime spread, Chicago answered every Tartan run, cruising to a 65–48 lead after three quarters of play. The fourth quarter brought more of the same from the South Siders, running away from Carnegie Mellon to secure the upset. Defensively, Chicago’s tenacity was the key to limiting NCAA DIII leading scorer fourth-year Lisa Murphy to just 16 total points, less than half of her season average. Anchored by 17 steals and six blocked shots, the Maroon defense forced a season-high 31 turnovers in the contest.

“We play best when we are excited and it’s pretty easy to get excited for big games like Carnegie,” third-year Elizabeth Nye said after recording 12 points and three steals in the upset. When asked about the offensive balance this season, Nye exuded confidence in her teammates. “We need everyone and have faith in everyone. Age disappears when you’re trying to win,” she said.

The first-place South Siders (12–6, 5–2 UAA) will kick-off a busy weekend Friday night, hosting the Spartans of Case Western Reserve University (11–7, 3–4 UAA) in a rematch at Ratner Athletics Center. Currently sitting in a three-way tie atop the UAA, the weekend matchups could have postseason implications for the Maroons. Friday’s tip-off is scheduled for 6 p.m.