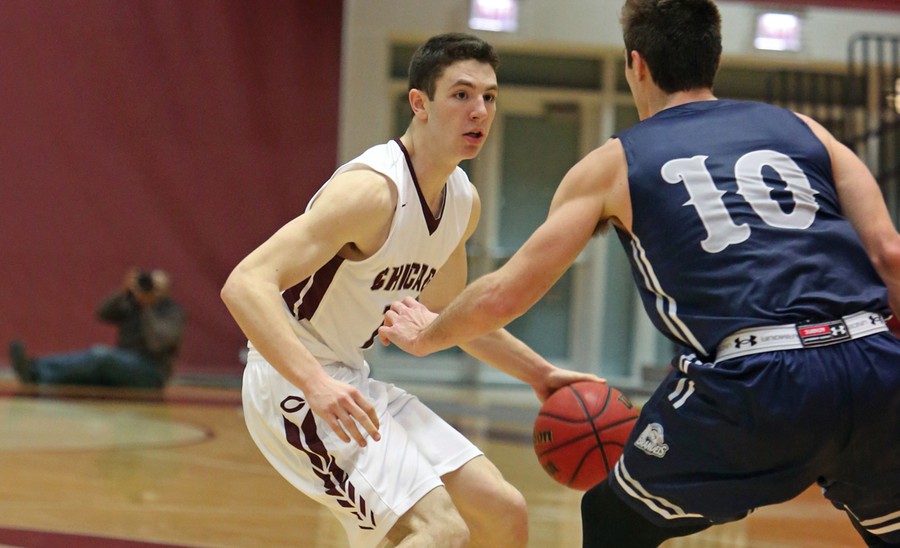 Third-year guard Jake Fenlon is focused on beating his man.

Case Western initially took advantage of Chicago’s seven straight misses behind the arc to start the game by jumping out to a 29–15 lead before the Maroons went on a run of their own, including three-pointers from Fenlon, fourth-year forward Waller Perez, and fourth-year guard Tyler Howard. Going into halftime, the University of Chicago trailed 41–37, but the squad was confident that it would be able to make a run after playing poorly in the first half.

In a back-and-forth second half, second-year forward Ryan Jacobsen made a big impact off the bench, snagging five rebounds and scoring 13 points, including a crucial offensive rebound he turned into another three-pointer for the Maroons.

“I was glad to come in and contribute to the team,” said Jacobsen, who led all bench players with 19 minutes. “It was a great win. A lot of guys contributed. I think we had five different guys score in the double digits. What is most important is that we got another conference win, though.”

All this, of course, led up to Fenlon’s late game heroics, as he scored the buzzer beater to give Chicago the 74–72 edge and beat Case. Perez led the Maroons with 17 points, while Howard led with seven assists, and fourth-year forward Blaine Crawford again led the team in rebounds with 14.

The second game of the trip did not go as well for the Maroons, who fell to fellow UAA member Carnegie Mellon (10–8, 4–3 UAA) 89–80, despite Fenlon continuing his outstanding play by setting a University of Chicago record with 10 made three-pointers.

The loss snapped Chicago’s three-game win streak, all of which were in conference. Carnegie Mellon led the entire game, as the Maroons got out to yet another slow start. Chicago found themselves in an early 25–9 hole that they were never able to climb out of.

Second-year guard Noah Karras contributed to Chicago’s three-point barrage, however, adding five three-pointers of his own in a 17-point performance, second only to Fenlon.

“Breaking the record was exciting, but that’s really just indicative of how guys on the team set me up to take good shots,” said Fenlon. “Carnegie played zone most of the game, which opened up a lot of outside shots, and our team was great about finding me when I was open, and fortunately I was able to knock a lot of shots down.”

Howard led the team with eight assists, while Perez led with seven rebounds in the loss.

The Maroons get to try again against both teams this weekend, as both Case Western and Carnegie Mellon are traveling to Chicago for their respective rematches.