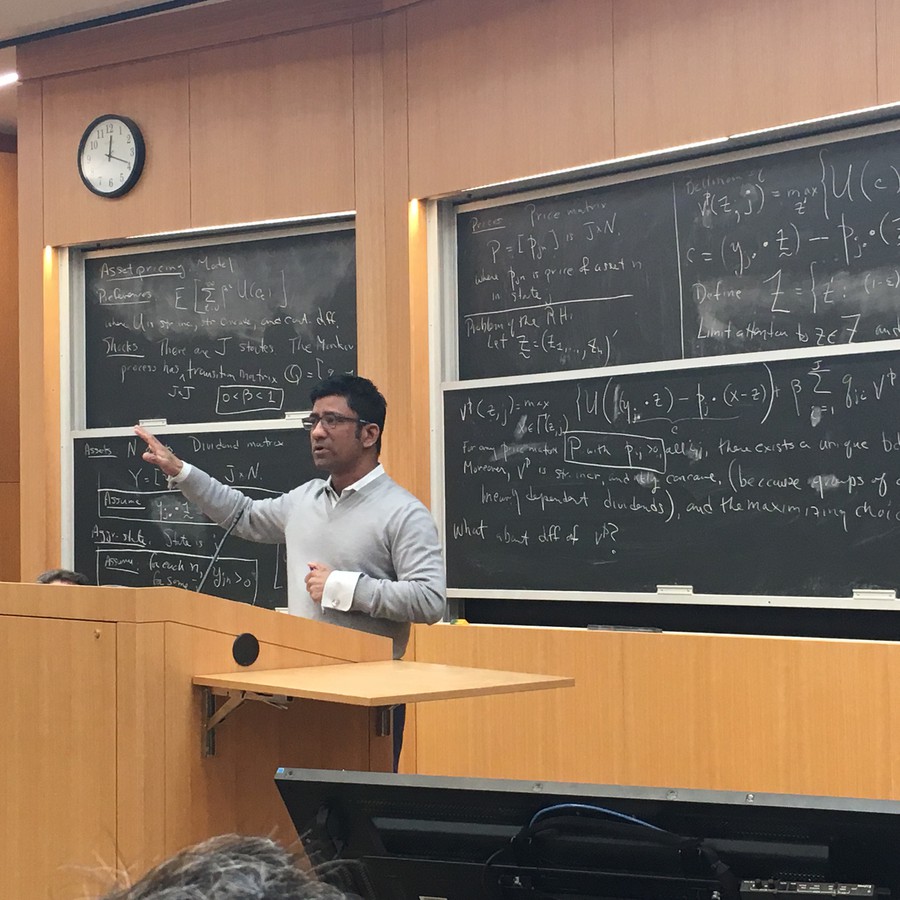 Law Professor Aziz Huq laid out the legal situation to a packed lecture hall yesterday, during a time slot that was to be filled by a Iranian-Canadian professor.

The head of the University’s Office of International Affairs (OIA) and a Law School professor spoke Monday to a room packed with students concerned with President Donald Trump’s executive order on immigration.

The University’s political theory workshop had been scheduled to host Arash Abizadeh, a political scientist from McGill University. In the wake of Friday’s executive order, Abizadeh, who was born in Iran, flew to Montreal instead. Trump’s order banned entry for residents of seven countries, including Iran, as well as all refugees.

“My city of birth is Shiraz, and all the evidence suggests I would be detained on arrival in Chicago and refused entry on the basis off my birthplace,” Abizadeh wrote in an e-mail. Among other topics, Abizadeh has written that unilateral border controls are incompatible with a theory of popular sovereignty.

“Rather than cancelling the workshop, we thought that it would be better to use this hour and twenty minutes to have a general discussion on the many issues surrounding the executive order, including its likely effects on the members of our academic community—students, staff, and faculty,” political science professor Chiara Cordelli said. Cordelli introduced the event. Attendees spilled into the aisle in the large basement lecture hall.

Will Levine, a graduate student in the political science department, then read a statement from Maryam Alemzadeh, an Iranian graduate student at the University of Chicago. Alemzadeh was finishing fieldwork for her sociology dissertation in Iran when the executive order was issued.

In her statement, Alemzadeh reacted to the order, which may prevent her from returning to the University for spring quarter. She also reflected on the response to the ban.

“I…feel denigrated today, not just personally, but as part of a community whose members had to worryingly cancel their travel plans, doubtfully travel, and be disdainfully restricted at transit airports, if not detained upon arrival, and most heartbreakingly of all, go back to the terrifying life of war and persecution that they managed to escape from. But I also feel a borderless power rising from the feeling of revulsion shared between the quote unquote banned community and the mass of U.S. residents. This is absolutely new and deeply thrilling,” the statement continued.

Aziz Huq, a professor at the Law School who spent part of Saturday helping people detained at O’Hare, spoke next. Huq, who also works with the American Civil Liberties Union, laid out the “legal landscape” in the confused aftermath of the executive order. He said he expected the case to face legal challenges from under the Establishment and the Free Exercise Clauses of the First Amendment, the Equal Protection Clause of the Fourteenth Amendment, the Administrative Procedures Act, and the Religious Freedom Restoration Act.

Huq said he knew of several organizations looking for plaintiffs willing to challenge the order. “An ideal plaintiff is someone that is in the United States, is somebody with a relatively stable, long-term visa, and is not a green card holder but is a national of one of the seven countries, and has a valid reason to leave the United States—a family reason, or a religious reason would be interesting. I would flag that I am perfectly happy to help connect people who are in that kind of position or who know people who are in that kind of position, to the right lawyer,” Huq said.

In the meantime, Huq and Tamara Felden, the head of the OIA, acknowledged that the situation was serious. At the point of entry, both pointed out, immigration officials had broad discretion to challenge, detain, and reject new arrivals. The new order made the situation even more pressing. “As you are hearing, we are in a pretty dire environment at this point,” Felden said.

Felden emphasized the resources available to students through the University, and encouraged students and faculty to reach out to the OIA with questions. During the event, Felden and Huq fielded questions from the audience about the implications for people with a variety of connections to the banned countries.

“I’ve been talking to several individuals who very correctly pointed out, this essentially traps me in the U.S., and that is not how things should work. However, at the moment, I’m grateful for every person who tells me they are still in the U.S., that you’re not abroad, trying to get back. At least for the moment, we think that your situation is somewhat stable, and we hope that we will soon have additional information about the impacts on the ground to work with,” Felden said.

Letter represents rare decision by administration to weigh in on a political question.