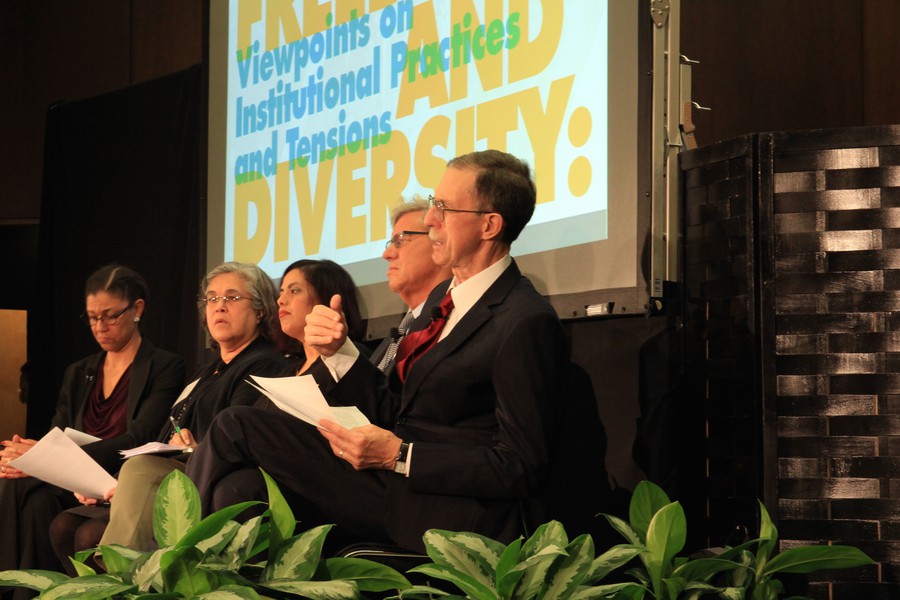 A panel of scholars from top American universities discussed the tensions between academic freedom and diversity at the School of Social Service Administration (SSA) Tuesday night.

The panel continued the local and national debate sparked in August by a welcome letter to first-year students. The letter, written by Dean of Students John “Jay” Ellison, condemned trigger warnings and intellectual safe spaces as violations of academic freedom.

Speakers from UChicago included Dean of the College John Boyer and First Amendment scholar and Law School professor Geoffrey Stone. They were joined by Zareena Grewal, an associate professor in the Ethnicity, Race, and Migration Program at Yale University, and Lorraine Gutiérrez, a professor at the University of Michigan’s School of Social Work.

Each speaker had 10 minutes to present their thoughts on the relationship between academic freedom and diversity to an audience of about 200 people.

Boyer focused on the history of academic freedom at the University, which he wrote about in his book, The University of Chicago: A History. The founders of the University were inspired to create a culture of open discourse based on the German, government-run research institutions some of them had attended, he said.

Boyer said that the University’s historically pluralistic student body, which has included women, Jews, and a range of socioeconomic backgrounds since the University’s founding, fostered a culture of academic freedom.

While Stone also addressed the issue from a historical standpoint, he focused more on broader trends in American higher education. He said that free expression and academic freedom are not synonymous, since the former concept has always been “vulnerable” and “tenuous,” whereas there is a consensus among academics regarding the virtue of academic freedom.

Historical threats to academic freedom include a doctrinaire moralism that allowed institutional leaders to discredit and dismiss professors who held controversial viewpoints on issues such as slavery, women’s rights, and Darwinism, Stone said. Over time, however, free expression became a tenet of American higher education.

“By 1892, when the University of Chicago was first created, our first president, William Rainey Harper, proclaimed that for a university to be a university, there must be free expression,” Stone said.

While Stone and Boyer grounded their arguments in the history of academia, Grewal used contemporary examples in her analysis of the “manufactured crisis” of trigger warnings and safe spaces.

As an example of the tensions between academic freedom and student diversity, Grewal cited a 2015 Yale protest that garnered national attention. The protest was catalyzed by an email from a faculty member who objected to a request from the university’s Intercultural Affairs Council that students avoid wearing racially insensitive Halloween costumes.

Grewal mentioned a video clip from the Yale protest that showed a black, female student who “lost her temper” with her white, male professor, claiming he was creating an “intellectual space” instead of a “home” for students. The video went viral in November 2015.

“What captured the American attention was that this viral clip fuses two preexisting stereotypes: the angry black woman and the coddled millennial,” Grewal said. “Lately, the issue of academic freedom has been incorrectly framed as the ‘good’ intellectual side versus the ‘bad’ [politically correct] side.”

Grewal said the debate over academic freedom is disproportionately focused on student free speech, which she said is “not in crisis.” She added that she supports a “civil space” in her classroom in which minority voices are amplified and intellectual comments are valued.

As a professor with experience in social work graduate schools, Gutiérrez said she is concerned about how students are being prepared to work in a diverse world. She said she supports “brave spaces,” in which students are “called in” to the discussion rather than “called out” for their differing opinions.

Following each scholar’s remarks, SSA associate professor Gina Samuels posed further questions to the panel. Instead of the conventional question-and-answer session, panelists separated and circulated among the audience.

Sociology doctoral student Brandon Sward said he was annoyed that there wasn’t a public question-and-answer session.

“I think it was a tactic to prevent comments about trigger warnings while cameras were rolling,” Sward said. “Frankly, that was lame and disappointing.”

Samuels said this change stemmed from a desire to encourage face-to-face dialogue. More than 15 minutes after the panel formally concluded, audience members remained seated at their tables, eating complimentary hors d’oeuvres while engaged in discussion.

The next SSA-hosted panel, which is tentatively set to discuss balancing the academic needs of students and the rights of faculty to make choices, will most likely be held in late March, according to Samuels.