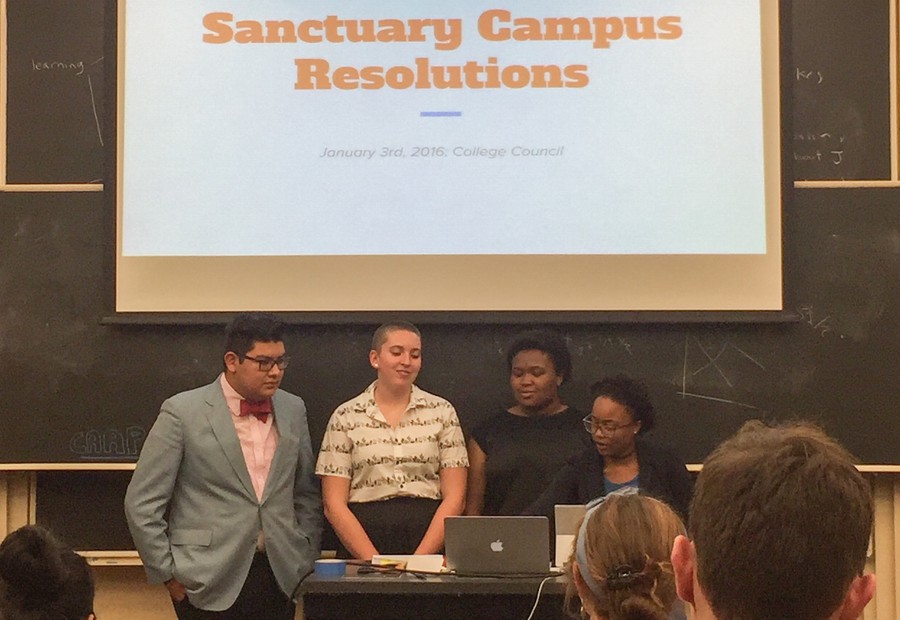 The authors present their resolutions before the vote.

Student Government College Council (CC) passed two resolutions on Tuesday night, one calling for the establishment of an undocumented, international, and Deferred Action for Childhood Arrivals (DACA) student advisory council, and one calling to make the University a “sanctuary campus.”

The advisory council resolution passed unanimously, while the second passed along with four abstentions.

College Council cannot enforce the resolutions. They serve as a suggestion to administrators, and are a way for CC representatives to bring concerns to the administration.

Rodriguez Cruz provided the opening statement when the two resolutions were introduced. “I implore you to just do your job,” he said to a hot, crowded room of CC representatives and students.

The four authors then went through the resolution clause-by-clause in a slideshow.

“We also didn’t want to waste anyone’s time. We also want to work with the administrators. This isn’t an angsty first-year thing where we’re just trying to get something passed. There are real reasons why we wanted to keep this council around,” Brown explained to CC.

Brown cited both a lack of information the administrators have given CC about the advisory council as well as the uncertain future of student involvement as justification for the resolution.

The resolution’s council would be a “permanent” council that only Student Government would have the power to dissolve. According to Brown, the UChicago Coalition for Immigrant Rights has been asking for such a council for “over a decade.”

When asked if they would require participants of the council to disclose their immigration status to the University and one another, the authors said they will leave it up to the “experts at UCCIR and OMSA who are best equipped to figure out that process.”

Veronica Myers was skeptical about the administration’s ability to remain transparent. “If we hadn’t brought up this issue would we have known of [the administration’s] plans and its actions? I don’t think I could say yes to that,” Myers said. Though no specifics of the administrative advisory council have been outlined beyond the e-mail from Dean of Students Michelle Rasmussen, Provost Diermeier has sent out two school-wide emails about the school’s efforts to support undocumented students, and President Zimmer signed a Statement in Support of the DACA Program and Undocumented Immigrant Students.

When asked if the authors were aware of precedent for the administration taking action based on a CC non-binding resolution, Brown underscored: “There’s not. Which is why it’s a great time to get started on that.”

The authors then moved on to the second resolution, calling for the establishment of a “sanctuary campus.”

To close the authors’ presentation of the resolutions, Myers questioned the commitment CC representatives have to their constituents if they allow “minute details” and wording to get in the way of a positive vote on the resolutions.

When question time came for the second resolution, third-year CC representative Adam Biesman noted that President Obama has deported the most people from the United States in history, implying that the impending inauguration of Donald Trump does not make the resolution any more of an “emergency” than before his election. Rodriguez Cruz responded by commending President Obama for implementing DACA, and argued that the two politicians cannot be compared.

Fourth-year representative Jake Mansoor noted that having a body of purely undocumented or DACAmented students may require students to waive their rights to privacy as established under the Family Educational Rights and Privacy Act (FERPA), which he worried might be asking the University to break the law. Mansoor’s comment was met with a brief silence as the authors discussed his concern among themselves, followed by several representatives motioning to move into debate. FERPA limits the ability of schools to release student records. The Council would “make an effort to protect the identity and safety of student representatives,” per the resolution.

When debate started, there was general agreement with the goal of the first resolution, but as fourth-year representative Joshua Engelman said, the body should avoid being “redundant,” as a couple representatives were concerned with. He suggested CC bring in a member of the administration before the body votes. Second-year Zander Cowan said that the resolution has potential to be more “effective and implementable,” through merging the resolution with the existing administrative body.

On the second resolution, Biesman said that he thought the resolution calling for a “sanctuary campus” was “nebulous and a little bit dangerous” given that it was “bringing a toxic issue back to campus.” Biesman later noted he was suggesting the vote was similar to the spring passage of the divestment resolution, in that they were both divisive.

First-year CC representative Sat Gupta did not take well to the comparison. “I think there’s a fundamental difference between this issue and divestment—or whatever happened last spring,” he said.

The council then created a Google document of amendments for the resolutions, and one was later approved by the council. The amendment inserted, “unless the Office of Multicultural Student Affairs, Center for College and Student Success, or University of Chicago Coalition for Immigrant Rights finds legal problems” to the clause establishing the membership to the proposed advisory council.

Mansoor suggested the addition of an amendment suggesting a Student Government “fund” for undocumented students, but his laptop subsequently lost power and he was ultimately not able to type up his amendment. “I abstained because my computer died during the amendment writing process and I wasn’t able to submit the amendment that I verbally mentioned in debate,” Mansoor told The Maroon after the vote.

“I did nothing over winter break… and they wrote a resolution,” fourth-year Louisa Richardson-Deppe said, praising the authors of the resolution.

When CC moved into voting procedure, the first resolution, “Resolution on the Formation of an Undocumented, DACAmented, and International Advisory Council” passed 16–0–0. The second resolution, “Resolution on the University’s Role in the Preservation of Undocumented Student Rights” passed 12–0–4. The four abstaining members were Jake Mansoor, Joshua Engelman, Zander Cowan, and Adam Biesman.

“I wasn’t sure about the legality of parts of the second resolution so I felt it was appropriate to abstain,” Cowan said of his own vote.

Joshua Engelman was displeased with the debate. “Today I was told that we should ignore details and concentrate on feelings. That's how Trump got elected.”

The passed resolutions, as well as the amendment are below.

Clause substituted in the first resolution: “BE IT FURTHER RESOLVED that this Advisory Council shall consist of two undocumented students, two DACAmented students, two international students, and six appointed administrators and faculty with at least one having expertise in immigration policies, unless the Office of Multicultural Student Affairs, Center for College and Student Success, or University of Chicago Coalition for Immigrant Rights finds legal problems, and;”

Some CC members want to prohibit immigration enforcement officials from entering campus without a warrant.