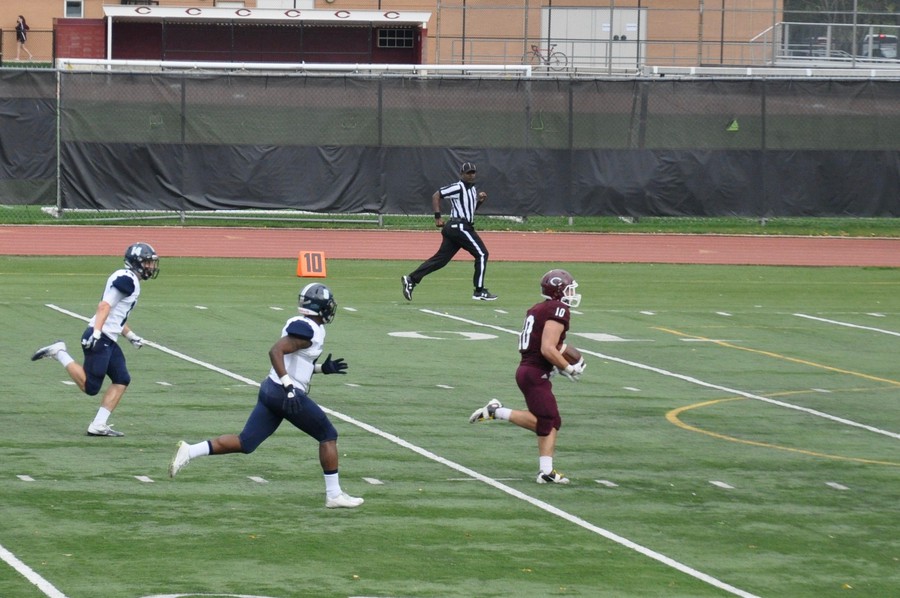 Fourth-year Chandler Carroll rushes home for his first touchdown of the day.

The University of Chicago men’s varsity football team (3–2) continued its winning streak this weekend with an impressive victory over Lawrence University (1–4), 28–8 on Stagg Field. After starting out the year with two tough losses, the Maroons have now won their last three games for a perfect record within the Midwest Conference (MWC).

Lawrence jumped out to an 8–0 lead in the first quarter, but the Maroons quickly responded to make it 8–7 going into the second. Fourth-year running back and two-time team captain Chandler Carroll had another impressive game, scoring four unanswered touchdowns as the engine of the offense. Carroll finished the day with 21 attempted for 104 yards and three touchdowns, as well as five receptions for 47 yards and one touchdown.

Fellow fourth-year Jamie Rieger also had an impressive game, with four receptions for 102 yards, including an impressive 37-yard leaping grab which set Carroll up to score.

“Lawrence was a good team and I’m glad we were able to grind out a solid win over them,” said third-year wide receiver Trevor Anderson. “It’s always nice to play in front of our home crowd and show them all a [win]. Chandler was absolutely unstoppable and the defense played lights out.”

The Chicago defense rebounded from the early score to allow only 157 yards of total offense. The Maroons simply punished Lawrence, racking up six sacks, 16 tackles for loss, one forced fumble, one interception, four pass break ups and three quarterback hits. Third-year defensive tackle Mike McGinley had perhaps the best game of his career playing the three-technique, racking up two sacks and 2.5 tackles for loss.

“We were very happy with the result. We started off a little slow and made some mistakes, but eventually we were able to find our groove,” said third-year kicker Mike Kurzydlowski on the win. “The offense and defense didn't let the weather or their playmakers impact their play. We are now 1–0 in the division.”

The MWC is divided into two divisions, with Chicago playing in the North. The best team from each division will play each other at the end of the season, with the victor going on to the DIII playoffs. With the team undefeated in both the conference and the division, it is in a great position moving forward.

“This week we are facing a really tough opponent,” Kurzydlowski added. “They are projected to finish in first place, but we aren't going to let that become a distraction. We are going to do what we do and focus on executing our goals.”

The Maroons play at St. Norbert College this Saturday, October 14 at 1 p.m.