Booth professor Richard Thaler was awarded the 2017 Nobel Prize in Economics for his contributions to behavioral economics. Thaler’s work has focused on limited rationality and social preferences, incorporating psychology into the study of economics. “In order to do good economics, you have to keep in mind that people are human,” Thaler said yesterday.

Eve Ewing, a Provost’s Postdoctoral Fellow at SSA, spoke at the Sem Co-Op on Sunday about her new collection of poetry, Electric Arches. Ewing said the book, which is primarily an account of black girlhood in Chicago, attempts to “expand the possibility of what other black women are allowed to write about and speak about in public.”

Voting sites for grad unionization: According to GSU, the four polling locations for the October 17–18 vote will be Regenstein Library (Room A11), Hinds Laboratory (Room 176), Kent Laboratory (Room 114), and Stuart Hall (Cox Lounge).

Professors at the University express their disappointment at the administration’s attempts to undermine graduate student unionization, arguing that the University is disrespecting the very principles of free speech and discourse it espouses.

Columnist Fred Kardos reflects on our increasingly strange world, encouraging us to embrace all the absurdity it has to offer, even when that includes Balenciaga's new high-fashion platform Crocs.

RNC Chair Ronna McDaniel is speaking at the IOP this evening. She will likely be asked about her recent criticism of Hillary Clinton for not condemning Harvey Weinstein and her claim that the allegations against Donald Trump are not comparable.

UChicago professor Rachel Fulton Brown sent dozens of e-mails to Milo Yiannopoulos “about the history of Christianity, the Crusades, and the righteousness of the West,” BuzzFeed reports in an in-depth story about Breitbart and the “alt-right.”

The most talked-about film of the year, Mother! is a prime example of the misleading marketing techniques of modern horror films.

Creative writing lecturer Augustus Rose discussed his debut novel The Readymade Thief, which explores the seedy underbelly of Philadelphia in a twisting thriller that features an eclectic cast of characters.

Campus and Student Life has these fliers up on campus about DACA: 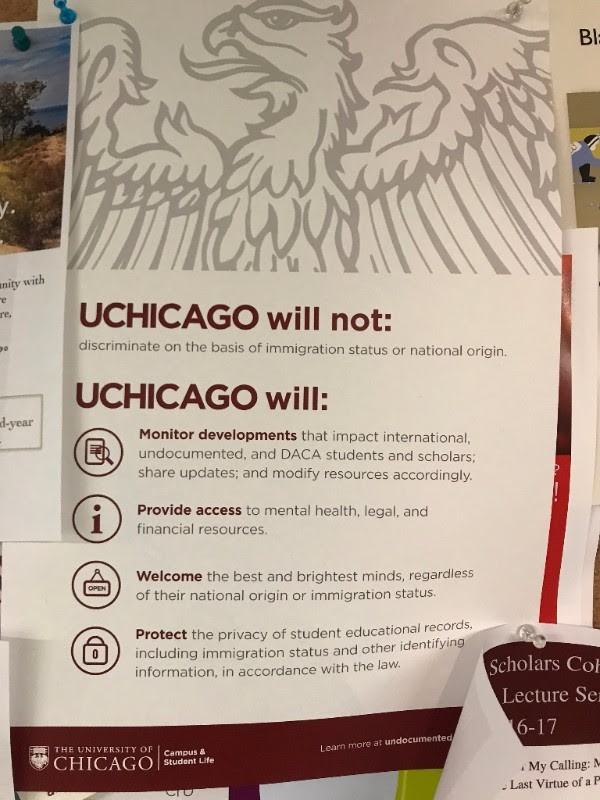 Fourth-year Chandler Carroll carried the football team to victory. The volleyball team keeps rolling, and shut out Elmhurst. Both women’s and men’s cross country impressed at the Lucian Rosa Invitational. Women’s soccer continues to be undefeated, which isn’t surprising.