“I…feel like part of what I’m trying to do is expand the possibility of what other black women are allowed to write about and speak about in public,” Ewing said. 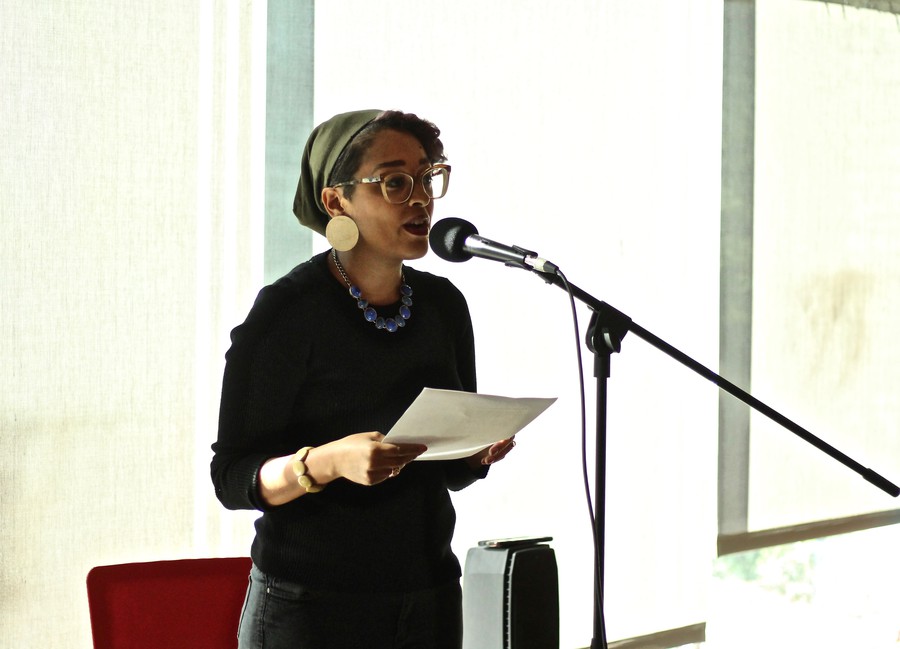 The Seminary Co-Op hosted Eve Ewing, provost's postdoctoral scholar at SSA, at a packed event on Sunday in honor of her new collection of poetry, Electric Arches.

Seminary Co-Op marketing manager Colin McDonald estimated that about 120 people attended the event, which consisted of a reading by Ewing, a conversation between Ewing and fellow poet Hanif Abdurraqib, and a question-and-answer session with the audience.

“This is about as big as it gets for an in-store event—every chair taken and standing room only,” McDonald said.

Electric Arches, which came out September 12, is primarily an account of black girlhood in Chicago. Ewing, who studied English as an undergraduate at UChicago before completing a doctorate in education at Harvard University, touches on many of her memories of growing up in the city throughout the book.

“In many ways it’s a coming-of-age book…[but] a lot of the book is more so writing through myself to an imagined audience that is in many cases very literal, very specific,” said Ewing, who worked as a middle school English teacher between undergraduate and graduate school.

“I had specific students that I’ve mentored and taught over the years in mind and I was trying to follow the adage that you should write the book you wish you’d been able to read,” she added.

The book is also Ewing’s attempt to broaden the space in which black women writers can express themselves.

“I…feel like part of what I’m trying to do is expand the possibility of what other black women are allowed to write about and speak about in public,” she said.

Publishers Weekly had high praise for Electric Arches. In a review of the book, they wrote, “[A] stunning debut…her subtle, provocative exploration of the boundaries between self and world allows a striking and visionary topography to take shape.”

Chelsea Williams, one of the event’s attendees, was excited to hear from Ewing in person after being introduced to Ewing’s work through the slam poetry organization Louder Than a Bomb and following her career for several years.

“[Ewing] was just as insightful [in real life] as she is in print,” she said.

Jourdan Jenkins, one of Ewing’s former students, has known Ewing since he was in sixth grade and enjoyed the opportunity to witness his old teacher’s evolution.

“It was really cool to see how far she’s come…It’s just like seeing a big sister do her thing,” he said.

The original version of this article misstated Ewing's title at SSA and used an outdated surname for Abdurraqib. The article has been amended to reflect the correct titles and names.