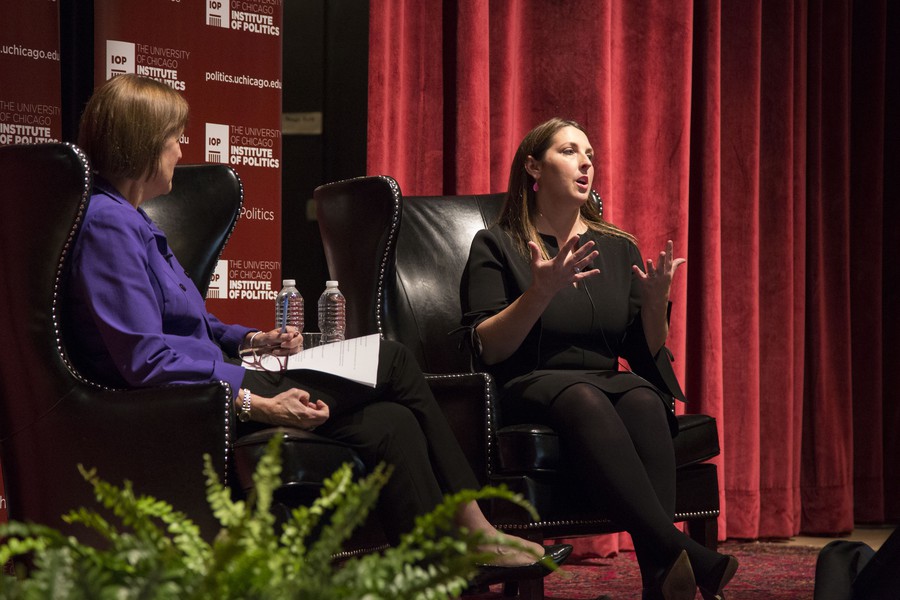 “We are in the strongest position we’ve ever been in,” McDaniel said, noting the GOP’s control of majorities in both houses of Congress and the presidency. McDaniel thanked what she described as a massively data-driven campaign for the party’s success.

McDaniel said a big part of her job as chairwoman is fundraising and preparing for elections. She is no stranger to this work, having served as chairwoman of the Michigan Republican Party prior to assuming her current position.

McDaniel argued that Barack Obama’s presidential campaigns weakened the Democratic National Committee (DNC), contributing to Republican victories. She said that the creation of Organizing for Action (OFA), which grew out of Obama’s campaign, has created problems for Democrats because there is an outside group working parallel to the DNC. While the GOP also had outside groups, she said none were as influential as OFA. She said the DNC was rendered largely useless, helping the Republican Party in the 2016 elections.

Tumulty said that despite the party’s overwhelming control of government, the GOP has been unable to push key parts of its agenda. She said the lack of Republican progress, especially the party’s three failed attempts to repeal and replace Obamacare, has not been helped by Donald Trump taking Twitter “potshots” at his own party members.

McDaniel expressed hope for future unity within the Republican Party, saying, “We have to let our policy and purpose unite us…. At the end of the day, we ran on the same things.”

When asked about the President’s tweets, McDaniel said, “He is a businessman who likes things to get done, so this is him saying, ‘Get it done.’”

McDaniel referenced her calls for Hillary Clinton to speak out against Harvey Weinstein. “She’s so critical of the President; why shut your voice down when he’s your friend?” she said. Clinton did ultimately put out a statement, which McDaniel acknowledged.

Tumulty pushed her to explain her position given that Donald Trump has called Bill O’Reilly “a good person” and Roger Ailes “a very good person.”

McDaniel continued to speak out against Clinton and Weinstein, saying, “I’m never going to be on the side of someone who’s a sexual predator or who’s admitted to sexual assault.” No mention was made during the event to Trump’s infamous recordings in conversation with Billy Bush.

Addressing the GOP’s current plans, McDaniel said that senators, who often face tough interim elections, are calling for a move on tax reform and business deregulation after the health care failure. She argued that overregulation actually helps big corporations by killing off their smaller competitors, saying, “If you’re a young person coming out of college, and you have an idea, and it’s stifled because of regulations, it’s a real issue.”

As for the future of politics, McDaniel said that the way forward rests in Americans’ ability to communicate with each other, regardless of personal opinion. “We have to have a dialogue…because there’s a lot more in common than we think,” she said.