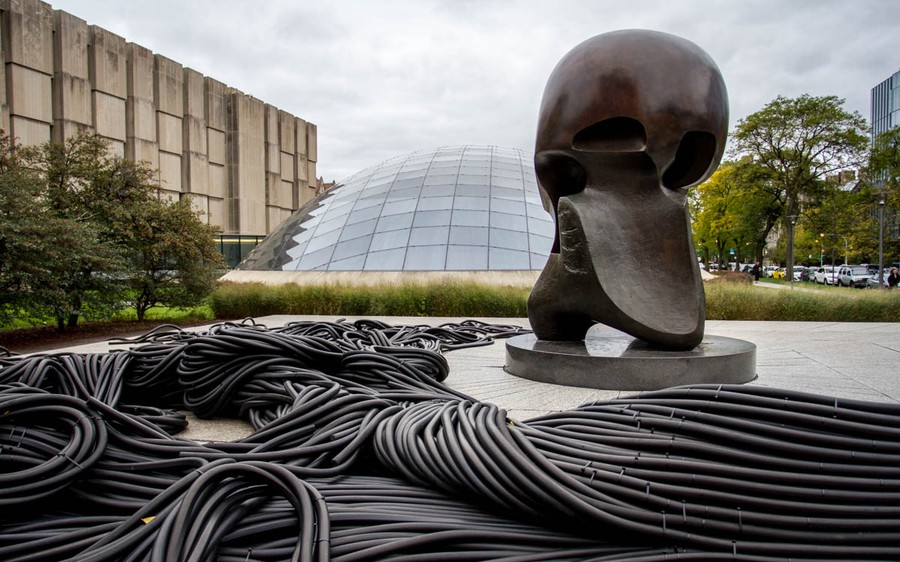 Amid the chaos of this year’s O-Week move-in day was a mysterious group of workers crowded around the Henry Moore sculpture outside Max Palevsky West Residential Commons. Throughout the week, one could find them milling around a pile of long, black rubber tubes, which slowly began to take form. The installation, entitled “Nuclear Thresholds,” is one of the many projects commissioned by the University to commemorate the 75th anniversary of Chicago Pile-1 (CP-1), the first successfully built, self-sustaining nuclear chain reaction.

“Nuclear Thresholds,” designed by Ogrydziak Prillinger Architects (OPA), winds around Henry Moore’s contrastingly sturdy, bronze memorial to the same event. Its sinuous structure was meant to be an exploration of both controlled and uncontrolled fission in nuclear reactions. 75-foot-long rubber tubes, secured only with zip-ties, form a bench intended to invite contemplation of Moore’s sculpture. According to OPA cofounder Zoë Prillinger, the tubes are intended to reflect the tightly packed graphite used in CP-1, while simultaneously existing as a meditation on the concept of matter as something “composed largely of space and energetic particles.” It’s an odd juxtaposition of physicality and conceptuality, which perhaps lends itself to the uncertainty one feels when standing in the midst of the sculpture.

Indeed, the shape of the arching bench also disintegrates into what Prillinger describes as “exponential chaos.”

“If a reaction goes supercritical...the system’s exponential expansion crosses the threshold into the realm of being out of control,” wrote OPA in its project report. Echoing this idea of disorder, the strands that make up the bench split apart at the ends.

While the installation is certainly successful in achieving what it sets out to represent, it seems that the artists were, if anything, too successful in depicting the balance of these “thresholds.” The bench makes for a disconcerting seat, losing the little order it did have, when we consider its material—a mass of tubes. It’s hard to imagine locating quiet contemplation within such an impermanent structure, one made of materials that look as temporary as scaffolding.

One can hardly walk past Mansueto Library now without casting an intrigued glance at the unexpected sight of black tubes. Although it can’t quite be called beautiful, “Nuclear Thresholds” certainly makes an impression on passersby.

“Nuclear Thresholds” will be installed at 5265 S. Ellis Ave through January 7. It is part of a series of lectures and exhibits, which will culminate in the two-day event “​Reactions: New Perspectives on Our Nuclear Legacy” from December 1–2.