Approximately 100 new researchers from the University of Illinois at Urbana-Champaign and the Army Research Lab will join the expanded Polsky Center for Entrepreneurship and Innovation in Hyde Park. 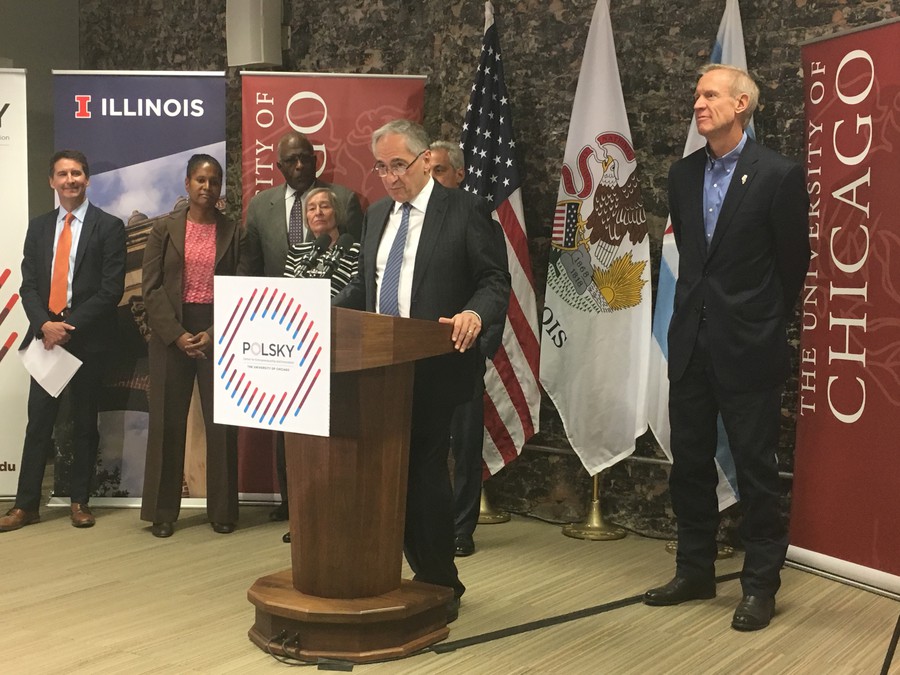 President Zimmer was joined by Mayor Rahm Emanuel and Governor Bruce Rauner at the announcement of the new collaboration at the Polsky Center.

The University of Illinois at Urbana-Champaign (UIUC) and the Army Research Lab (ARL) will establish a presence at the Polsky Center, bringing a new surge of researchers and research dollars to the University of Chicago’s technology hub.

“The work has the potential to create solutions to some of the world’s most difficult problems, from producing clean water to treating cancer,” Zimmer said. “This ambitious project will accelerate the pace of discovery, while providing a clear path to economic development for our community, city, and state.”

UIUC will locate around a hundred researchers, students, and professors in Hyde Park as part of its collaboration with the University of Chicago.

The 280,000 square foot complex will replace a parking structure in the northern portion of the block already occupied by the University’s Harper Court.

Each of the speakers emphasized the economic impact the expanded research presence would have on the South Side of Chicago.

“One of the big challenges of being a global city with world class research institutions is how do you create inclusive growth, not exclusive growth,” Emanuel said, before complimenting the University on its commitment to making the Polsky Center’s opportunities “felt throughout the South Side.”

The University of Chicago and UIUC will partner to create a civic engagement program to give South Side residents chances to benefit from the work being done at the Polsky Center, Zimmer said.

The partnership between UIUC and the University of Chicago is the first in a series of planned projects across Illinois called the Illinois Innovation Network. Governor Rauner announced the Network at a separate press conference Thursday morning.

“Today is a watershed moment in the economic development of the State of Illinois.... Universities are the foundation for economic prosperity, and you can see it in every community in which a world-class university is at work,” Rauner said.

On Wednesday, UIUC announced plans to establish a separate technology-oriented campus in downtown Chicago. The Tribune reported Wednesday that the University of Chicago and Northwestern had both been enlisted as partners in that project.

The ARL, the Army’s in-house research unit, has been establishing regional laboratories over the past two years in order to draw on local concentrations of expertise across the country. ARL Central, their laboratory at Polsky, will work with the University of Chicago and other universities in Illinois and around the Midwest.

"The University of Chicago will serve as the hub for our efforts to increase our research portfolio in materials science," ARL Director Phillip Perconti said in a press release. ARL planning documents published February of 2017 suggested ARL Central would focus on “impact physics, quantum science, high performance computing, [and] materials for weapons and protection.”

Emanuel said he, U.S. Senator Dick Durbin, and Zimmer had been lobbying the Secretary of the Army in support of the Chicago location for the ARL Center.

“I feel like I’m on staff [at the University],” Emanuel joked, in reference to his work advocating for the ARL and other research projects at the university.