Football Goes Above & Beyond In Victory 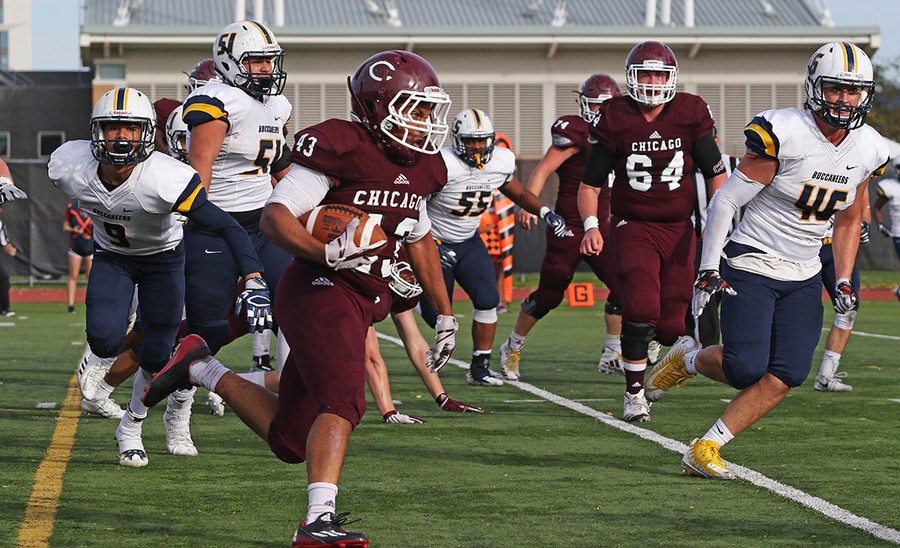 Fourth-year Floyd Pitts rushes the ball as he is surrounded by the opposing defense.

This past Saturday, countless parents and alumni attended the homecoming football game against Beloit College. They were not disappointed, as the UChicago team saw its best rushing performance in 10 years, winning with a final score of 55–12. At the end of the game, UChicago averaged 8.8 yards per carry and racked up a total of 433 rushing yards, the most yards they have rushed since 2007. This outstanding performance improved the Maroons’ season record to 4–3 overall and 2–1 in the Midwest Conference.

Fourth-year running back Chandler Carroll first carried the ball 28 yards, and then scored the first touchdown of the game with a 12-yard carry. Soon after, he jumped into the end zone for a one-yard touchdown. Already leading 14–0, the Maroons then saw first-year Riley Trettel carry the ball 22, 25, and 48 yards in his last three touches, with the last 48–yard carry leading to a touchdown that would put the team ahead 21–0. Trettel ended the game with 115 rushing yards, although he had just five touches.

Carroll then came back for a third touchdown with a 28-yard carry, racking the score up to 28–0 well before the end of the first half. With 12 touches, he accomplished 123 rushing yards. After these plays, he averaged 10.2 yards per carry and rested for the duration of the game. In just one drive, first-year Vittorio Tricase carried the ball 57 yards to prepare the team for their fourth touchdown. First-year quarterback Campbell Garrett threw the ball 15 yards to second-year wide receiver Dante Nepa on third down, scoring again and raising the score to 35–0 at halftime.

The Maroons began the second half of the game with a 31-yard touchdown by first-year Mike Martinson, racing up the sideline out of reach of the opposing team. Soon after, third-year Henry Imburgia ran 59 yards in three carries and scored yet another touchdown, increasing the score to 49–0. UChicago scored their last points of the game with fourth-year Floyd Pitts completing a 10-yard run into the end zone, his first career touchdown. Beloit was completely shut out until the last four minutes of the game.

Second-year kicker Daniel Ducic recently joined the team, and had his first chance to participate this weekend. “I played soccer my entire life. I wanted to try something new, but to continue playing sports at a varsity level, so I decided in August that I would try to walk onto the football team as kicker,” Ducic said. “After making the team, I had a blast getting to know all of the guys and getting adjusted to a new sport. On Saturday we were up by a lot and in the fourth quarter, coach Wilkerson pulled me over and said that if we scored one more touchdown, I would be kicking off. We scored and I got to kickoff once. It was the first time I had ever played in a football game and it was really exciting to be a part of the team.”