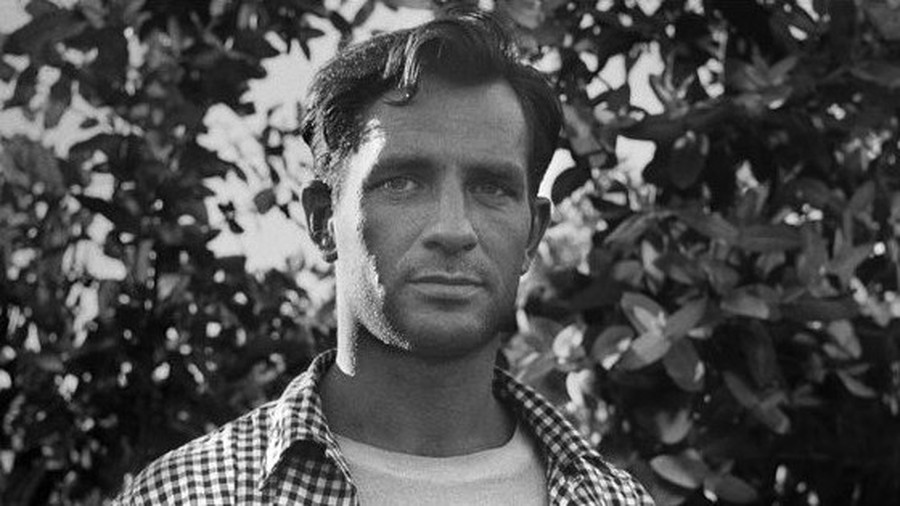 Chicago’s newest museum is currently showcasing one of the U.S.’s most enduring texts: the 120-foot original scroll of Jack Kerouac’s Beat doctrine, On the Road, now on display with an accompanying exhibit at the American Writers Museum.

The museum opened on Michigan Avenue in the Loop this past May. It is the culmination of eight years of tireless work by its founder Malcolm O’Hagan, who was inspired by the Writers Museum in Dublin, which highlights the Irish literary tradition.

Since its opening, the American Writers Museum has featured the temporary exhibit, The Beat Journey: Jack Kerouac’s “On the Road.” The scroll is on loan from Jim Irsay, the owner of the Indianapolis Colts, who purchased it at an auction in 2001. In addition to compiling photographs, maps, and other information to illuminate Kerouac’s travels, the museum has also created the first-ever digitized version of the scroll, which will remain there permanently. The Karla Scherer Center for the Study of American Culture, based at the University of Chicago, organized a tour of the exhibit this past Friday.

On the Road is one of the seminal literary works of the Beat Generation, whose prominent members included Kerouac, Allen Ginsberg and Neal Cassady. The Beats were known for their defiance of sexual norms, interest in Eastern spirituality, and general lack of conformity to post-war American culture. In many ways, the Beat Generation prefigured the countercultural revolution of the 1960s, which some of them went on to pioneer.

Although it went through several rounds of revisions before its publication in 1957, On the Road was originally written by Kerouac in a short burst of inspiration in April 1951. For three weeks, Kerouac sat in his Manhattan apartment, typing at a rate of 100 words per minute, producing sheet after sheet of margin-less tracing paper covered in dense blocks of black text. He taped these together as he went, creating the original 120-foot scroll of On the Road.

On the Road is a predominantly autobiographical account of Kerouac’s travels across the U.S. and Mexico between 1947 and 1950. These adventures were shaped primarily by his friend Neal Cassady. Kerouac—or rather, “Sal Paradise,” as he names his character in On the Road—is attracted to the excitement and spontaneity with which Cassady—renamed “Dean Moriarty”—approaches life. Together, they search for the sublime in the everyday: dancing the night away at jazz clubs, hastily planning romantic trysts, and connecting with friends old and new. Even Kerouac’s most mundane experiences, like sleeping at bus stations and ordering apple pie for breakfast at small town diners, acquire a magical aura as they fit together to form the narrative of his grand journey.

The original scroll of On the Road is the perfect reflection of this magic. Though composed of nothing more than tracing paper, ink, and tape, its physical form as a scroll connotes esoteric myth. As the paper has yellowed, ripped, and become famous over time, the scroll’s enchanting ambience has only intensified. The fact that Kerouac typed On the Road in such a short time seems to suit the spontaneity and passion that makes the narrative so enthralling. Writing itself assumes a sort of duality in On the Road. On one hand, writing is the subject of reverence that unites Kerouac and his friends. On the other, there are multiple instances in On the Road in which Sal Paradise reports in a single sentence that he has written a book as a means of supporting himself. A similar duality exists when one imagines Kerouac chugging away at his typewriter on West 20th Street, becoming a machine as he pumps out the first draft of On the Road, while at the same time channeling a sort of divine energy into the scroll that would influence generations of artists, writers, and readers.

The scroll and its accompanying exhibit will remain at the American Writers Museum until November 4.