Glass Animals Brings the Pineapples and Punch to Aragon Ballroom 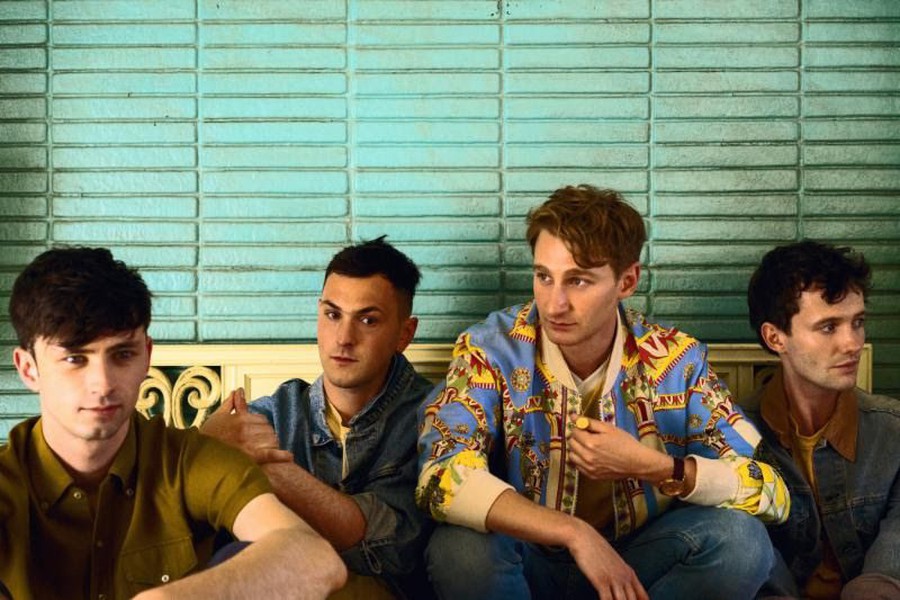 The Oxford-based band consists of Edmund Irwin-Singer on the bass, Joe Seaward on the drums, Dave Bayley as the lead vocalist and guitarist, and Drew MacFarlane on the guitar.

There are concert venues, and then there is the Aragon Ballroom. Located just off the Red Line uptown, it might as well be another world. Enter the main ballroom and you’re transported to a scene from One Thousand and One Nights—the balconies’ intricate facades mimic a town square scene, complete with Spanish roof tiles and life-size turrets. Gaze to the star-spangled ceiling and you are greeted by a Van Gogh-esque view. What better venue then, for indie-rock band Glass Animals, whose front man, Dave Bayley, gleefully announced to the full house, “We’re your acid trip,” at the onset of their show this past Thursday. It was indeed a trip, with the audience collectively transported to a world in which you can use a “cookie for a coaster” (“Season 2 Episode 3”) and drink “pork soda” (“Pork Soda”).

The stage was set with several large cubes in pixel-like formations that changed colors to the beat of the music, a giant television set and an oversized, golden, pineapple disco ball. Why a pineapple? Fans would point you to a single lyric from the band’s popular song, “Pork Soda” off their Mercury-nominated album, How to Be a Human Being: “Pineapples are in my head/ got nobody ’cause I’m brain-dead.” The fruit has become a sort of mascot for die-hard fans. In fact, the band made the news when this summer’s Reading and Leeds Festivals banned pineapples in response to fans’ habits of bringing real or blowup pineapples to shows. In an interview with NME, Bayley describes that, despite the ban, “Some people got creative. There were at least five real pineapples in the crowd, which is actually pretty good considering they were cracking down on everything—inflatable pineapples were getting chucked away.”

This droll irreverence can be found in spades in the band’s dreamy lyrics. Coupled with a bright, futuristic indie sound, this music is magnetic; live, it’s explosive. This year the band was nominated for the prestigious Mercury Prize; past winners include indie-rock heavyweights Franz Ferdinand, Arctic Monkeys, and alt-J. At times, like Franz Ferdinand, drummer Joe Seaward hits thumping ’70s-style beats, at others, the nonchalant vocal style and electric accents of alt-J are evident in Drew MacFarlane and Edmund Irwin-Singer’s harmonies, and the lyrics are reminiscent of the kaleidoscopic Arctic Monkeys. This is not music to rave to or hear at a nightclub; it’s music you can dance to getting dressed in the morning, music for when your study sesh turns into a study break.

The audience at the Aragon Ballroom reflected this—casual listeners were present, but big fans were also in attendance. It was easy to spot the people decked out in pineapple print shirts, shorts, or hats. During one song, a boy turned to me and yelled over the music, “It’s a religious experience!” He was ecstatic. Others mouthed lyrics. “This is my favorite song!” a friend yelled. “This is your favorite song? It’s mine too!” a stranger responded. People bopped to the music and everyone flooded forward as, during one song, the front barriers were pulled away and Bayley performed from a platform in the middle of the crowd. Thousands of people crowded around him, illuminating him by the lights of their cellphones as they attempted to make the moment last.

After a rousing call for an encore, the band returned to the stage for one more song. But instead of one more hit, or even a lesser-known gem from their first album, ZABA, they chose to cover “Crazy” by Gnarls Barkley. I am of the opinion that a fantastic cover needs to pay respect to the song in question but also add a new stylistic spin, and Glass Animals delivered with a version all their own that honored the original. It was a fantastic end to a fiercely charming concert experience. If this show was any indication, expect to see Glass Animals on the Mercury Prize shortlist and beyond, this year and next.