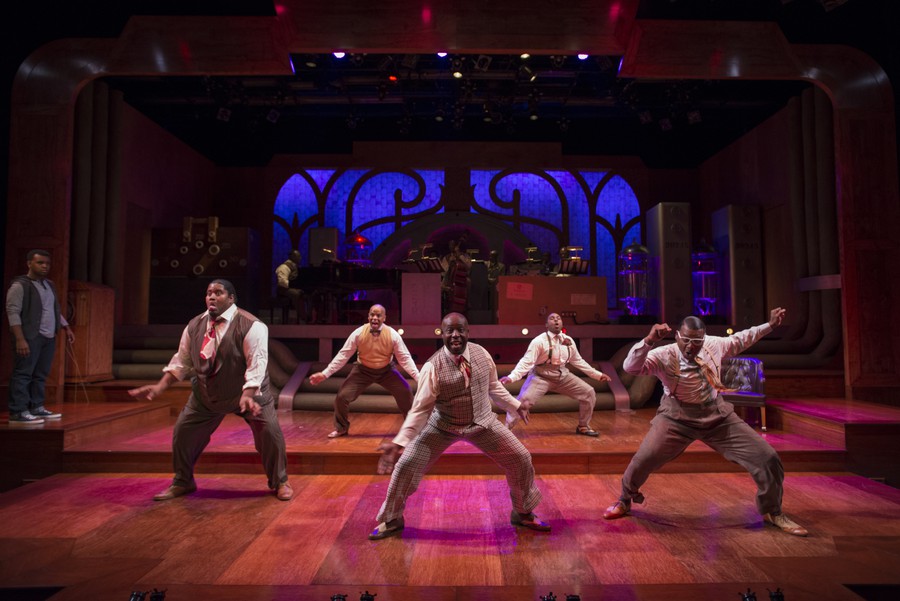 The Court Theatre season opener, Five Guys Named Moe, is a delightful tribute to the music and legacy of jazz musician Louis Jordan. Although the musical begins with a downcast Nomax (Stephen “Blu” Allen) singing “Early in the Morning,” the bluesy tune sets no precedent for the humor and liveliness that imbues the rest of the musical. Moments after the song ends, five guys—Eat Moe, No Moe, Little Moe, Four-Eyed Moe, and Big Moe—emerge, literally headfirst, from Nomax’s radio to offer him relationship advice through song and dance.

As director Ron OJ Parson noted, this show is typically produced in 1,300-seat theaters. Yet the intimate setting of the Court does not diminish the actors’ showmanship, which shines in both laugh-out-loud moments (Four-Eyed Moe wearing a chicken headdress during his falsetto performance of “Ain’t Nobody Here But Us Chickens”) and somber ballads (Eat Moe’s rendition of “Don’t Let the Sun Catch You Crying”). Each song in the musical is a show in itself, spectacularly choreographed, and accompanied by live music that resonates throughout the theater.

Just as the five men startle Nomax by inviting themselves into his personal life, they surprise the audience by inviting us into the bizarre musical world they have invented. They address male members of the audience from the beginning, singing “Beware, Brother, Beware.” Later, they invite two women onstage, offering an “apology for all the chauvinistic songs” in the play, and serenade them with “Look Out, Sister Look Out.” We join the chorus for “Caldonia,” participating in a call-and-response with the Moes. And in the most memorable segment of the show, concluding a winning first half, the five guys have the audience singing gibberish (“Push Ka Pee Shee Pie”) and walking out the door in a conga line.

Like the members of every great band, each Moe has his own quirk—true to his name, Eat Moe is always hungry—but they move as a cohesive unit, singing in perfect five-part harmonies (particularly memorable in their a cappella rendition of “Knock Me a Kiss”) and snapping in unison throughout the show. Their energy is so unsurpassable that Nomax and his storyline become tangential, serving mostly as fodder for the songs performed. We never truly learn why the Moes commit to guiding Nomax, and, amid music and laughter, we never completely invest ourselves in Nomax’s relationship woes. Yet this all fits in with Louis Jordan’s philosophy, and the blues tradition, of “laughing to keep from crying.”

Five Guys Named Moe is an absolute joy to watch; song after song, the audience cannot help but laugh as they join Nomax in affirming, as the five Moes collectively sing, that “life is so peculiar.”