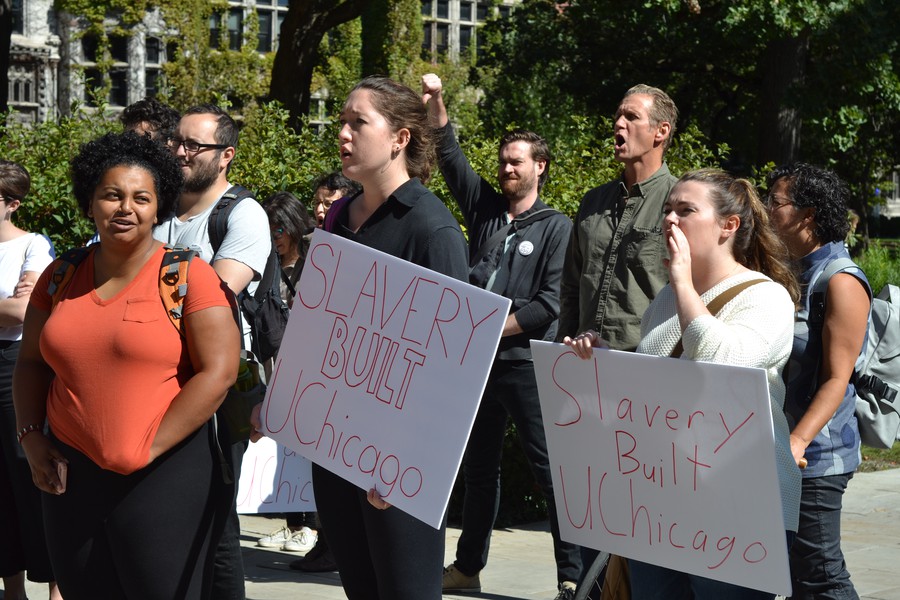 More than 70 people rallied and marched for racial justice on Friday, demonstrating in front of Levi Hall before marching to Hutchinson Courtyard.

The demonstration concluded a week of activism events regarding race at UChicago that was organized by a coalition of campus groups.

Representatives of these groups, including Graduate Students United (GSU) and UChicago Student Action (UCSA), spoke on topics related to racial justice, as well as the recent campus unionization campaigns and a perceived crackdown on activism at the University.

The ralliers held signs with messages including “Reparations at UChicago” and chanted slogans including “Zimmer, Zimmer, you can’t hide, we can see your corporate side” and “urban renewal is urban removal.” The chants alluded to the University’s involvement with the Obama Presidential Center and other South Side development projects, which critics fear will displace current residents.

The center will be built on a 21-acre site in Jackson Park. One speaker, fourth-year Cindy Du with UC for a CBA, noted that the project will coincide with the University’s construction of the Rubenstein Forum conference center and a 15-story for-profit hotel.

Nearly all of the speakers emphasized the University’s alleged avoidance of racial issues, including a connection between the original Baptist University of Chicago and prominent Illinois politician Stephen Douglas, who took a morally ambivalent position on slavery in the run-up to the American Civil War. Some of the speakers mentioned a paper by a team of UChicago graduate students working at the Reparations at UChicago Working Group (RAUC), which argues that Douglas was a direct financial beneficiary of slavery. The paper also argues that the old University of Chicago, which received the land for its campus from Douglas, should not be considered a separate entity from the modern University, as it traditionally has been. 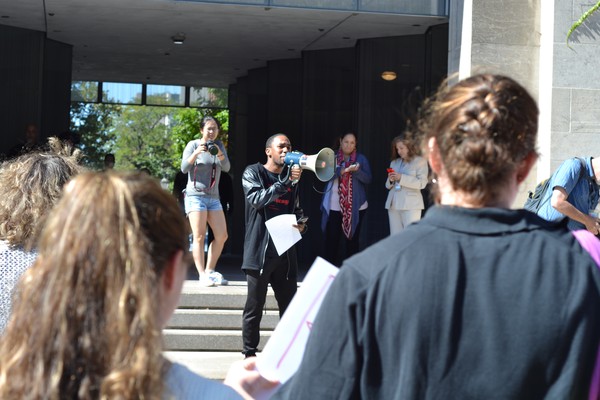 A student speaks at the racial justice rally on Sept. 29.

During the second half of the rally, the group marched through the main quad to Hutchinson Court, near the plaque of Douglas outside of Mandel Hall in the Reynolds Club. Another commemoration of Douglas, a stone from Douglas Hall of the old University of Chicago, sits in the wall of the tunnel connecting the Classics Building and Wieboldt Hall.

Ta-Nehisi Coates, prominent intellectual and public advocate for black reparations, attended the part of the rally outside the Reynolds Club, at one point filming the ralliers.

Second-year Michelle Yang spoke on behalf of UChicago United, a coalition of multicultural RSOs: the Movimiento Estudiantial Chicanx de Aztlán (MEChA), the Organization of Latin American Students (OLAS), the Organization of Black Students (OBS), the African Caribbean Students Association (ACSA), the Arab Student Association (ASA), and the PanAsia Solidarity Coalition (PanAsia). Yang said large numbers of students at UChicago incorrectly believe that racism is not an issue on campus and called for more targeted measures to support minority students, including ethnic studies programs and a stronger bias response team. “We want the establishment of ethnic studies, black studies, Chicanx studies and Asian studies for core classes that don’t only offer texts by dead white men, not only for students of color but for all students to understand the racist foundations that America was built on.”

Several of the speakers echoed the feeling that the University has resisted protecting and supporting activist members of the campus community. Mathematics Professor Denis Hirschfeldt, a member of AAUP and UChicago Resists, said that there has been an ongoing campaign by the University to make activists unwelcome. Hirschfeldt said, “Some of us are vocal, some of us are less vocal, but there are faculty here that want activists here.”

Several speakers stressed the importance of the upcoming vote on graduate student unionization, currently scheduled for October 17–18, and criticized the University administration for filing a motion that would further delay the vote.

Other speakers mentioned the University’s unwillingness to name and condemn the David Horowitz Freedom Center, which recently spread posters naming members of campus groups affiliated with the Boycott, Divestment, and Sanctions (BDS) for the third time in the past two years.

Fourth-year graduate student Alejandra Azuero Quijano, who spoke during the rally on behalf of UChicago Resists and is also a member of GSU, spoke about the University’s free speech policies and a newly ratified disciplinary system for disruptive conduct in relation to attacks on students like those by the Horowitz Center.

Speaking after the rally, Azuero Quijano said, “If you have an environment in which students are both being in some ways criminalized for protesting, and on the other hand, external speech is protected over speech coming from within campus, then you have an environment where the Horowitz [Center] can come and attack members of our community, and know that it will go not unnoticed, but not responded at with the same severity with which students are being met.”

Kamm Howard, a member of the National Coalition of Blacks for Reparations in America (N’COBRA) who spoke during the rally, said that he hopes the reparations campaign at UChicago could have nationwide influence. “What happens in Chicago, and of course at the University of Chicago, has national reverberations, so we’re hopeful that what happens here can also affect some of the things that are going on around the country with universities admitting to their complicity, but also reconciling that past with reparations or reparative measures.”