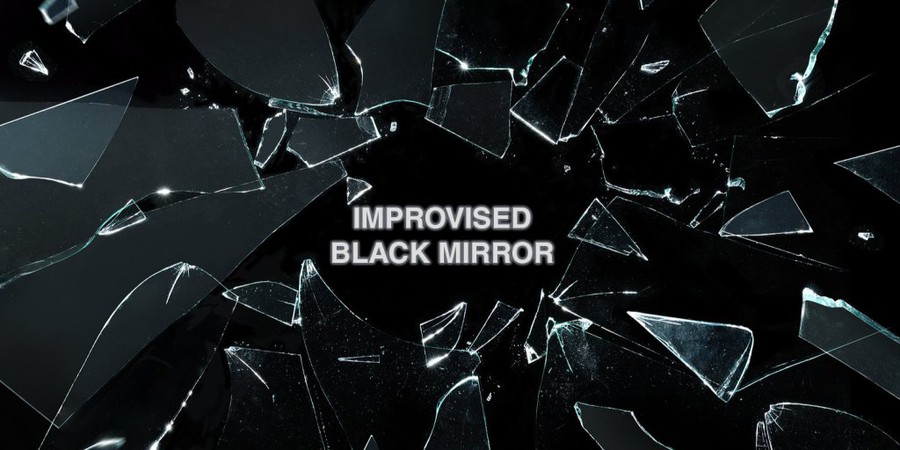 Theater, when spectacular, can seize the everyday and remake it into something luminous. The best productions often begin unconventionally. It is the addition of something else, a half-step out of line with humdrum reality (a fantastic storm, the Devil himself, or the sudden onset of a musical number) that allows the play to linger on your tongue and makes you wonder whether the everyday is even normal to begin with.

So although the concept of Improvised Black Mirror seemed difficult to execute well, it might have been in step with the strangely wonderful world of theater. Furthermore, the show came from the lauded Public House Theatre. Give the show a chance. As it turns out, I should not have been so optimistic.

Problems began before a single actor set foot on stage. To generate ideas for each of the night’s two “episodes,” as the performances were styled, the audience was prompted to enter one-word ideas into an online polling system. Results were projected live onstage. To no one’s surprise, displaying anonymous submissions publicly is risky. After polls first opened asking our greatest fears, we learned that members of the audience were most afraid of a cornucopia of racial slurs. Submitting one term multiple times made it grow larger on the screen. Soon, we faced the introductory slide to an intro-to-the-alt-right course. This wasn’t fun.

Nastiness like that is something a warm, contradictory presence can mollify: The cast could call out the racist, put on a play about acceptance, and shepherd us back into warm, liberal bubbles. But when they came on stage, they milled around, speaking about neutral or funny suggestions (biggest fear for the future? Grandchildren! Ha!). Finally, they launched into an “episode” without explicitly naming a focus word.

A word could have given this set of improv actors a theme. Instead, the actors attempted to create a thought-provoking, moving drama or tragedy in half an hour without any focused direction.

The first episode considered violence. Our protagonist tried a drug called Booch (originally a cutesy way to refer to kombucha that grew without explanation into a psychoactive chemical, revealing that the show was, in fact, unscripted). The drug revealed his innermost violent thoughts on screen, allowing him to join coworkers and friends in the emotional catharsis of murdering parents, children, and spouses.

The concept was compelling. It cut, in theory, close to the racial hate emblazoned on the screen at the beginning. It went no further. The actors could not decide who else onstage knew about the drug: Our protagonist encountered both alarmed social workers frightened by his violent thoughts and friends indulging publicly (and legally!) in the drug. Delivery was hesitant: Scene changes were often accompanied by long um's as actors tried to figure out how to proceed. Dialogue was often circular and repetitive (you killed him! No, it was only a fantasy. But you killed him! Yes, in a fantasy! But I saw him die!) as the cast tried, often unsuccessfully, to push the scenes forward. And, most damningly, the conclusion was weak and internally inconsistent: The protagonist was arrested for a real murder that he believed was only a fantasy.

What’s the message? Is it that violent thoughts are fine and universal, or is it that they ought to be suppressed since they beget real violence? If the latter is the case, we are in deep trouble, since we were told everyone has violent thoughts. Improvised Black Mirror dug too deep in its quest for deeper meaning, crossing and confusing its own path.

The second act fared even worse. A second poll appeared, this time asking what people did not want to change in the future (essentially, the first question asked for something bad, and the second for something good. Most popular answers to each: first hate, then love; answers that made sense, but were rather shallow). Again, slurs appeared, and the second most popular option was “Shrek.”

When the cast took to the stage again, they issued a half-hearted condemnation: “to whoever wrote those words, fuck you!” Then they decided the next episode would be about racism.

In the episode, ordinary people have implants in their heads that change what they see. Out of nowhere, an update makes our protagonist hate redheads. We learn quickly that her child is redheaded. She makes her way to a psychologist’s office where she weathers accusations of child abuse. The solution is another update that makes it impossible for her to see red. This has little effect, and she is finally arrested and dragged off to an unclear fate. The final scene showed the executives who managed the update, crowing that within 15 years, their update will cause all people to look the same due to interbreeding. No more hate, since no more redheads.

When approaching sensitive questions of racism, science fiction has traditionally taken two courses. The first imagines that there is no diversity and illustrates the consequences. The second imagines that freedom of expression is limited, and imagines the consequences. This show chose both. Freedom of choice is limited: the mother can’t see red. This limitation results in arrest and emotional trauma. Then, diversity is eliminated. But diversity is eliminated only because freedom of choice is not an option. Both paths are ugly, and the anti-racist ending to the play seemed like a bitter pill to swallow, not a victory. The actors meant to shame the racist in the crowd, but inadvertently advocated for exactly that kind of racism.

Improvised Black Mirror took on a profound burden in attempting to improvise what really should be a scripted, thoughtful affair. They tackled intricate, thorny issues with no planning and stumbled face-first into the rose bushes. Save the price of the $12 ticket, buy yourself a month of Netflix, and watch the real Black Mirror—you’ll be better off.