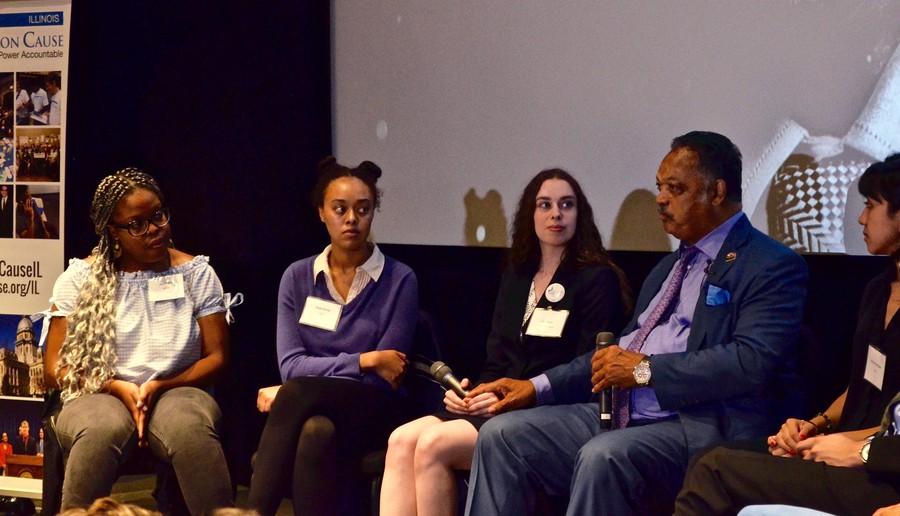 Civil rights activist and Baptist minister Jesse Jackson joined a panel of student activists at an event hosted by UChicago Common Cause in the Logan Center for Arts last Thursday to discuss political organizing.

Jackson opened the event by describing the long struggle of many groups, including African Americans, women, college students, and Americans who do not speak English, for voting rights in the United States.

“It took us 25 years to get from the bridge in Selma to be able to begin to vote in a multiracial, multicultural way,” Jackson said, referencing the infamous conflict outside of Selma in 1965, when a peaceful voting rights march was forcibly put down by state troopers.

Jackson praised Common Cause’s recent success in advocating for automatic voter registration in Illinois. He also criticized the electoral college for putting states’ rights before the rights of people and preventing a “one-person, one-vote” democracy.

Jackson also called on University of Chicago students to register in Illinois. He asked the crowd to repeat after him, “I should vote where I live.” He emphasized the importance of young people voting, both on principle and as a way of boosting the power of student organizing.

Jackson continued by describing how the value of a university education in effecting political change dissuaded him from dropping out of college to become more involved in the civil rights movement.

Jackson went on to explain that with a degree, activists can better understand the social and economic forces behind what they are fighting and help people in ways they otherwise could not, as lawyers, or doctors.

When asked about his opinion on the ongoing unionization efforts of graduate students at the University, Jackson said he considered organizing to be a fundamental right in a democracy and supported better conditions for University staff. However, he avoided endorsing the graduate student union itself. “You all are going to get me in trouble up here,” he joked.

“The persons here who cut your grass, who clean your rooms, who cook your food should get paid at least $15 an hour,” he added.

Jackson spoke harshly of the Trump administration at several points during the discussion, answering that if he had the power to enact one federal policy today, he would “send Trump’s ass back home.”

He added that apart from President Trump, Attorney General Jeff Sessions represents “the most dangerous person to the civil rights movement” because of his views that the Civil Rights Act of 1964 imposes on states’ rights. According to Jackson, as Attorney General, Sessions has used “money that was designed to pursue the armed military buildup of white nationalists” to attempt to end affirmative action in schools. This is an apparent reference to the Trump administration’s decisions to cut funds used by a Department of Homeland Security task force to combat white nationalism and to have the Department of Justice investigate claims that affirmative action policies discriminate against Asian Americans.

Jackson closed by elaborating on the role of his faith in his activism. “My religion makes me political; my politics don't make me religious,” he said. “My faith obligates me to help people who can't help themselves [and] to build a coalition beyond my own box.”