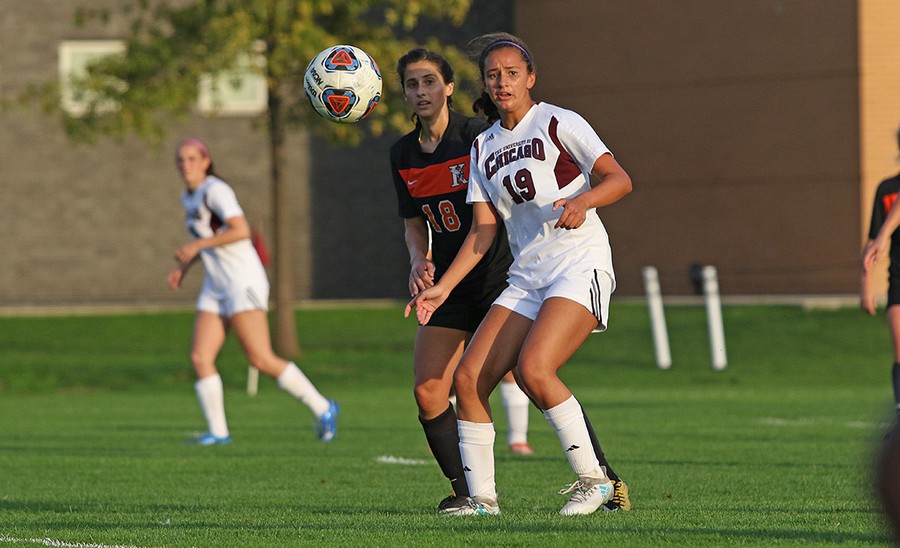 Second-year Julia Lodoen anticipates the ball as she stands directly next to her defender.

The UChicago women’s soccer team continued their historic run with a decisive 6–0 victory against non-conference opponent Kalamazoo (7–6). With an 11–0 record, the Maroon women stay ranked No. 1 in the NCAA DIII rankings, as listed by D3soccer.com

Fourth-year Caroline Olivero left her mark in the match as she opened the scoreboard with a hellacious strike from 20 yards out in just 23 seconds with first-year Charlotte Waechter providing the assist. Olivero continued with a sensational cross that was met by third-year Jenna McKinney and led to the second goal just past the three-minute mark. McKinney continues to lead the team offense with eight goals and four assists this season.

Second-year Hanna Watkins netted a brace as she scored her first goal of the game at the 26-minute mark, with an assist from fourth-year Mia Calamari who now has eight assists this season. Watkins would add on to the scoreboard just five minutes after the start of the second half, with an unassisted strike that was 18 yards out and, after the keeper mishandled it, hit the cross bar and went in.

Looking to extend the lead, second-year Julia Lodoen scored her second goal of the year off an amazing cross from first-year Katie Jasminski in the 75th minute. Lodoen would end the shutout by scoring her third goal on a penalty kick in the 84th minute that would go in through the bottom right. This was just after a foul made on teammate Rachel Dias by Kalamazoo.

Olivero spoke of their undefeated streak, stating, “It feels incredible. We set a lot of goals when the season started and one of them was to take it one game at a time. Every game is a game we have to win, non-conference or conference.”

The Maroons look to bring this momentum with them as they face off against Emory University. With a 7–3 record, the Emory Eagles won their last game 2–0 and have outscored their opponents by a 29–5 margin. Whether it’s the first half or second, they are lethal, having scored 10 of their goals in the first half and 19 in the second.

Despite the tough challenge that they pose, the Eagles should tread carefully against the Maroons and players like McKinney, who is a savant when it comes to scoring, leading the team with eight goals, and Calamari, who continues to lead the team in assists with eight.

When asked about the pressure felt with maintaining their untainted record, Olivero added, “Yes, there definitely is that pressure. We have the longest winning streak in UChicago women’s soccer history right now. Our coaches had our 350th win this game, so we definitely feel a target on our back, especially being number one in the country, but at the same time, I don’t think any of us feel like we are better than anybody. Every game is a time to test ourselves and prove ourselves. We don’t take anything for granted, so every game is a game to take care of.”

The Maroons will face off against Emory on Saturday at 1:30 p.m. CT.