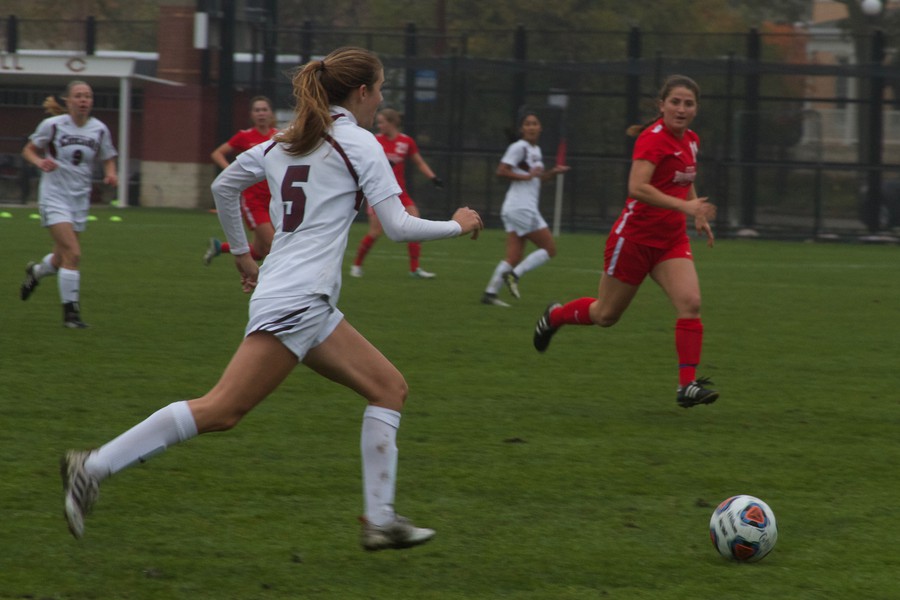 The women’s soccer team is returning to the postseason this weekend for the fifth straight season after finishing the regular season with a 17–1 record, ranked No. 3 in all of NCAA DIII. The Maroons set a school record by winning the first 17 games of the season before dropping the very last game against rival Wash U (15–1–1) by a score of 2–1. Because both programs had identical UAA records of 6–1, they technically split the conference championship, with Wash U getting the automatic bid due to their tiebreaker over Chicago.

Despite heading into the playoffs coming off a loss, fourth-year Madori Spiker is not concerned but rather sees this as a pivotal learning moment for the Maroons. As nice as a perfect season would have been, teams can often learn more about themselves from losses. It is much better to go through that experience now, rather than when the games are win-or-go-home.

“The first loss has only motivated us to be better,” Spiker said. “It highlighted a few areas where we have room for growth, and over the past week of practice we have worked hard to address those areas of our play.”

Both the first and second rounds of the playoffs will be hosted in Hyde Park this weekend, with the Maroons facing St. Catherine University (9–6–4) on Friday, November 10 at 11 a.m. The winner of that game will then face the winner of the UW–Whitewater (14–3–4) and Hope College (18–2–1) on Saturday.

The Maroons’ eventual goal is to return to the Final Four, having lost in last year’s semifinals after a remarkable postseason run. This year’s Final Four is hosted in Greensboro, NC on December 1–2. Make no mistake, the team’s goal is to finish what they started last year and win the national championship.

“The team is incredibly excited to be heading into the most challenging portion of our season,” Spiker added. “We’ve put in consistent work as a team since mid-August and can’t wait to see the culmination.”

This also marks the final stretch of games for Spiker and her fellow fourth-years: Mia Calamari, Whitley Cargile, Kelsey Moore, and Caroline Olivero. These five players have helped lead UChicago to the playoffs every year and now have one more chance to bring a national championship back to Hyde Park.

“This playoff season is an opportunity for all of us seniors to accomplish the lofty goals we’ve set for ourselves and our teammates,” Spiker said. “This last stretch will hopefully be the best stretch we’ve had playing for UChicago soccer.”