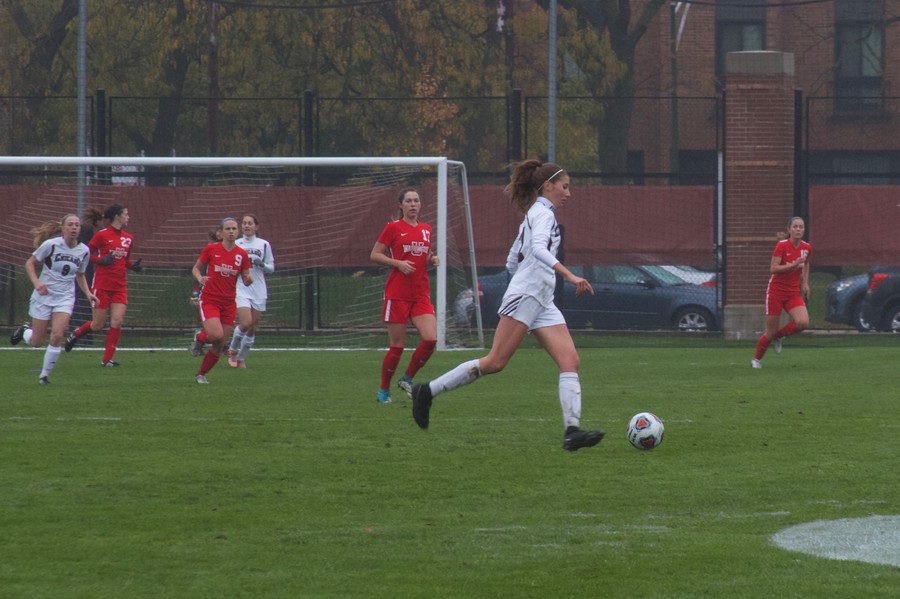 Second-year Mackenzie Peebles dribbles the ball for the Maroons.

Having played two games in two consecutive days, the University of Chicago women’s soccer team rolled into the third round of the NCAA DIII tournament with ease, after securing blowout victories over St. Catherine University and Hope College.

In the first round against St. Catherine, both teams had to adapt to the cold and the snow that persisted throughout the match. However, for the opposing side, what could go wrong went wrong. This was seen in the twelfth minute, when the Wildcats scored an own goal. Second-year Clare Suter sent the ball into the box, and a Wildcats’ defender unsuccessfully tried to clear it out, sending it into their own goal.

Going into the second half, it didn’t take long for UChicago to find its groove. The next two goals came from fourth-year Mia Calamari and first-year Katie Jasminski. The play for the last goal was initiated in the 64th minute by second-year Adrianna Vera, who passed the ball to third-year Jenna McKinney, who then centered it to an open Jasminski who tapped it in for the 3–0 victory.

It was another impressive yet unsurprising game for the Maroons. They finished the game with 29 shots in total, 14 being on goal, whereas the Wildcats only had five shots, with four being on target.

The Maroons brought this momentum with them when it came time to face off against Hope College the next day. In a competitive first half, the Maroons managed to score in the 14th minute after a superb run made by McKinney, who crossed the ball to Spiker, whose decisive shot immediately went in.

Entering the second half, the Maroons were invigorated and demonstrated the same fervor that had brought them so far. Playing with intensity and intelligence, McKinney extended the lead in the 72nd minute, after receiving a pass from Jasminski and immediately launching it past the keeper.

The third goal was a result of a corner kick taken by Calamari, finding an open McKinney who then delivered with a brilliant and cheeky backheel shot that found its way into the net.

Jasminski then had her second assist of the day, finding second-year Rachel Dias, who chipped the ball over the keeper in the 79th minute to conclude scoring.

In the post-match interview, McKinney spoke of her performance, saying, “I told myself before this game that today was going to be different. I wanted to make a difference on that field. I’ve been talking to my dad a lot actually. It’s so helpful having your team behind you. It makes a difference. I know Madori is going to be there for that run and I know Hanna [Watkins] is going to play me that ball. It was such an amalgamation of perfect passes and runs and just trying stuff and it just makes the whole game fun.”

The NCAA Round of 16 commences on November 17, when the Maroons face off against Wheaton College.