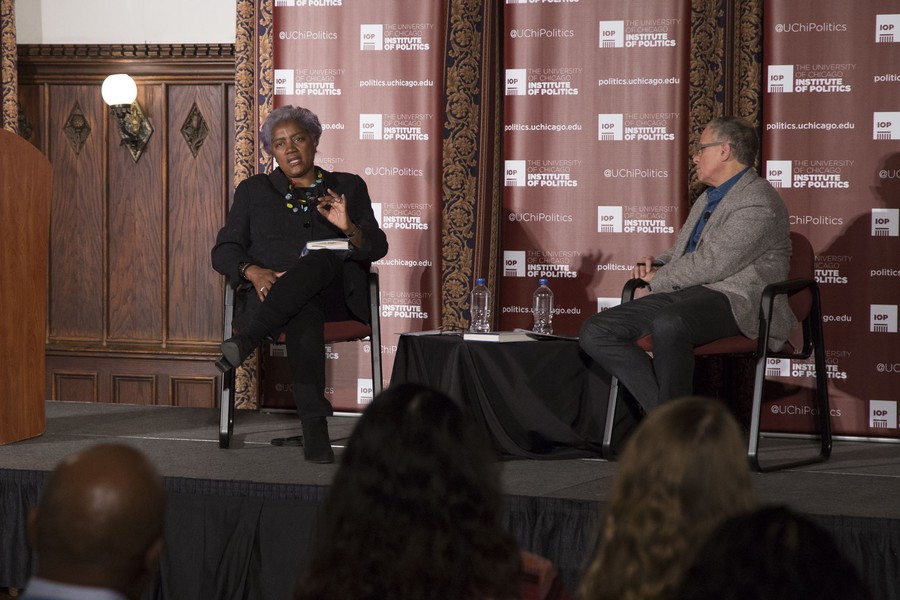 Donna Brazile discussed Russia, the Clintons, and the 2016 election at an Institute of Politics (IOP) event on Monday. The veteran Democratic political strategist spoke with IOP fellow and former chairman and president of the U.S. Export-Import Bank, Fred Hochberg.

Brazile, who has worked in some form on every presidential campaign from 1976 to 2000, recently published a book, Hacks: The Inside Story of the Break-ins and Breakdowns That Put Donald Trump in the White House.

She began by explaining that the hacking of the 2016 election was primarily aimed at damaging Hillary Clinton in order to help Donald Trump’s campaign. “The hacking that took place was to cause disruption in our democracy, to discredit Hillary Clinton and her campaign, and to distort the DNC,” she said, “…[and] the President of the U.S. today will not recognize the Russians were involved.”

Brazile explained that the hacking took place across the federal government, including not only the DNC but also governmental agencies. To prevent this, she said, “You have to have a sophisticated system by which you monitor and find traces of evidence destabilizing factors of your election infrastructure.”

When Hochberg asked “What was unique about 2016?”, Brazile said it was “one of the most disruptive political cycles we’ve ever seen.” Trump, she argued “received billions of dollars of free television coverage” and stood at the center of media attention.

Brazile emphasized that elections have increasingly become horse races, where people focus less and less on candidates’ views about public issues. She believed that we should go back to having conversations about big issues.

As a result of this agreement, Brazile could not spend the money she helped raise for the DNC.

Brazile was dismayed by the “arrogance” of Clinton campaign staffers, who “would not hear the concerns of the DNC chair who was travelling two to three days a week.”

“I don’t have to give anyone any kisses,” she said. “I’m not Patsey the Slave.”

At the same time, Brazile emphasized that she was not working for Hillary Clinton or Bernie Sanders, but trying to help the Democratic Party and the country.

“As painful as the experience was, I would do it again,” she said, because she believes Clinton would make a better president than Trump.

Referring back to the Russian hacking and internal disorder of the Democratic Party, Brazile commented: “Wounds don’t heal if you don’t expose them. You’ve got to let people see what those wounds look like.”

During the event’s question and answer session, an audience member asked if the Democratic Party should have a younger leader. While Brazile made it clear that party leadership welcomed young people, she largely defended the work of Nancy Pelosi, the House Minority Leader.

“Nancy Pelosi is fierce,” said Brazile. “She goes out there on a daily basis and raises money throughout the country...She’s gonna leave the stage when she wants to.”

When asked whether the two-party system is good for democracy, Brazile argued that before considering a three-party system, “We should strengthen our political institutions because hyper-partisanship is destroying our democracy.”

She noted that polarization is another reason why “Russians were so successful in destabilizing our democracy through hacking.”

Brazile concluded by discussing her disappointment with the media, arguing that major news organizations did not sufficiently inform the American people about Russia’s “aggression and attack.”