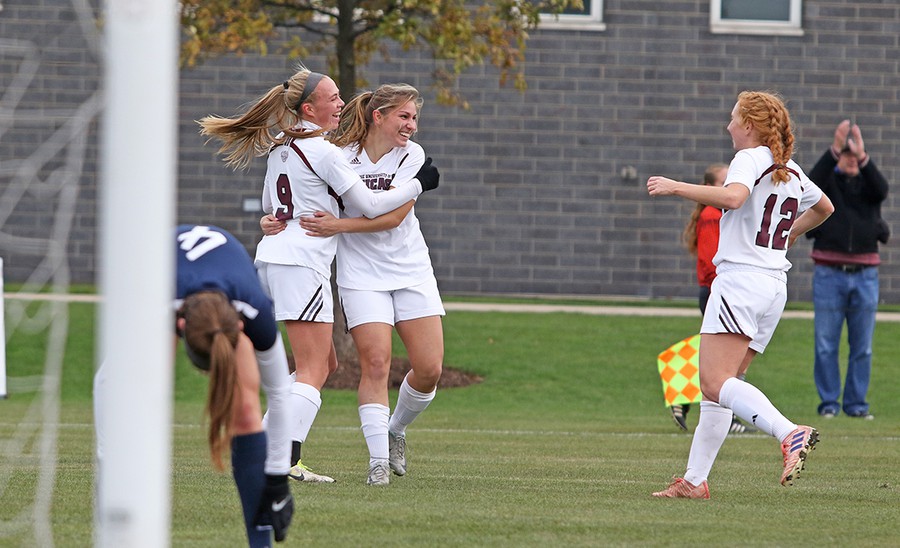 The University of Chicago women’s soccer team continues to conquer it opponents and is another step closer to its goal of winning the NCAA DIII Championship, having made it to the Final Four for the fifth time in program history. The Maroons improved their record to 21-1, with convincing victories over No. 17 Wheaton and No. 15 UW–La Crosse.

In their first match against Wheaton, the Maroons scored their first goal with spectacular contributions from two first-years. Having just entered the match, first-year Katie Jasminski accelerated down the right and sent an on-point cross that fellow first-year Maddie DeVoe battled for with a Thunder defender. In the end, the ball entered the far post in the 19th minute.

UChicago’s lead was extended in the 59th minute, when crucial movement of the ball from fourth-years Kelsey Moore and Madori Spiker initiated a pass from second-year Hanna Watkins to third-year Jenna McKinney, who sent the ball through the goalkeeper’s legs for an insurance goal. The game ended with the Maroons outshooting their opponent 15-1, another stellar performance from second-year Katie Donovan and first-year Miranda Malone. The Maroons have only conceded six goals this season.

The next day, the South Siders faced off against UW–La Crosse with the desire of making it to the Final Four.

The opponents did not seem to matter to fourth-year Mia Calamari, who said, “No matter who we were going to face, we have a goal in mind, and that is to make the Final Four. It didn’t matter what team we were playing against, it didn’t matter if they’d beaten us consistently for the past decade, or if we hadn’t seen them. We didn’t care. It’s about us when we go on the field. Playing our style and playing our game has been really important and we’ve been really consistent in that no matter who we come up against, what the conditions are, we come out and we do what we intend to do.”

Treating it as just another game, the Maroons did not hesitate to open the scoreboard and were not fazed by the low temperature and high 20 MPH winds. In the 12th minute, Jenna McKinney once again scored for the Maroons with the assist by Hanna Watkins.

The second goal came after 15 minutes when second-year Rachel Dias sent a ball that Jasminski headed in. Continuing the pressure and aggression, UChicago maintained possession for the majority of the time with only eight shots taken by the Eagles.

The remaining two goals by the Maroons came in the second half. In the 67th minute, Moore launched the ball into the net after rebounding a shot taken by Watkins. The final dagger came in the 81st minute, when a left-footed shot from second-year Julia Lodoen went in decisively. The final score, with 28 shots and 13 shots on goal, was 4-0 in favor of the Maroons.

The No. 3 Maroons will play their NCAA Final Four match on December 1-2 at the UNC Greensboro Soccer Stadium.