In May 2016, as the presidential election entered its final six months, the University of Chicago Democracy Initiative  (UCDI) distributed a survey to better understand how our college community engages with politics.

While some of the questions directly referenced the election, many asked generally about survey takers' relationships with politics. The original results of the survey were published on the UCDI's website in February of this year, but The Maroon has since conducted additional analysis on some of the survey's more "timeless" questions, providing additional information about how the UChicago community engages with politics.

How active survey respondents believed themselves to be seemed to line up well with the type of elections that they participated in. For example, those who participate in local elections felt 13.8 percent more engaged in politics than those who said they choose not to vote.

Lastly, the survey examined whether people believe they are qualified to participate in politics based on their understanding of it. 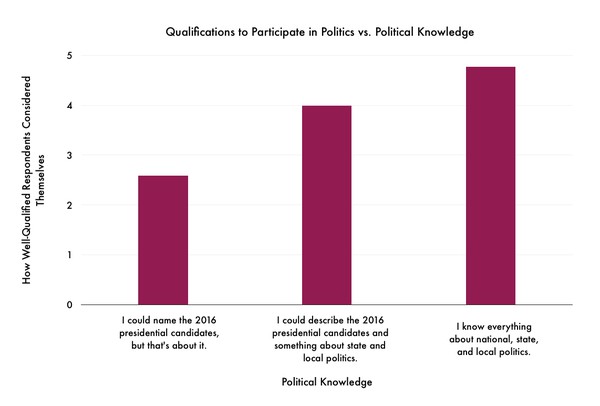 Ultimately, and as one might expect, those who felt they were knowledgeable about "everything" in local, state and federal politics felt that they were the most well-qualified to participate politically.

Going forward, UCDI plans to conduct more surveys addressing topics of political engagement and reaching out to a wider variety of participants (this survey reached a relatively small sample of only 133 individuals).