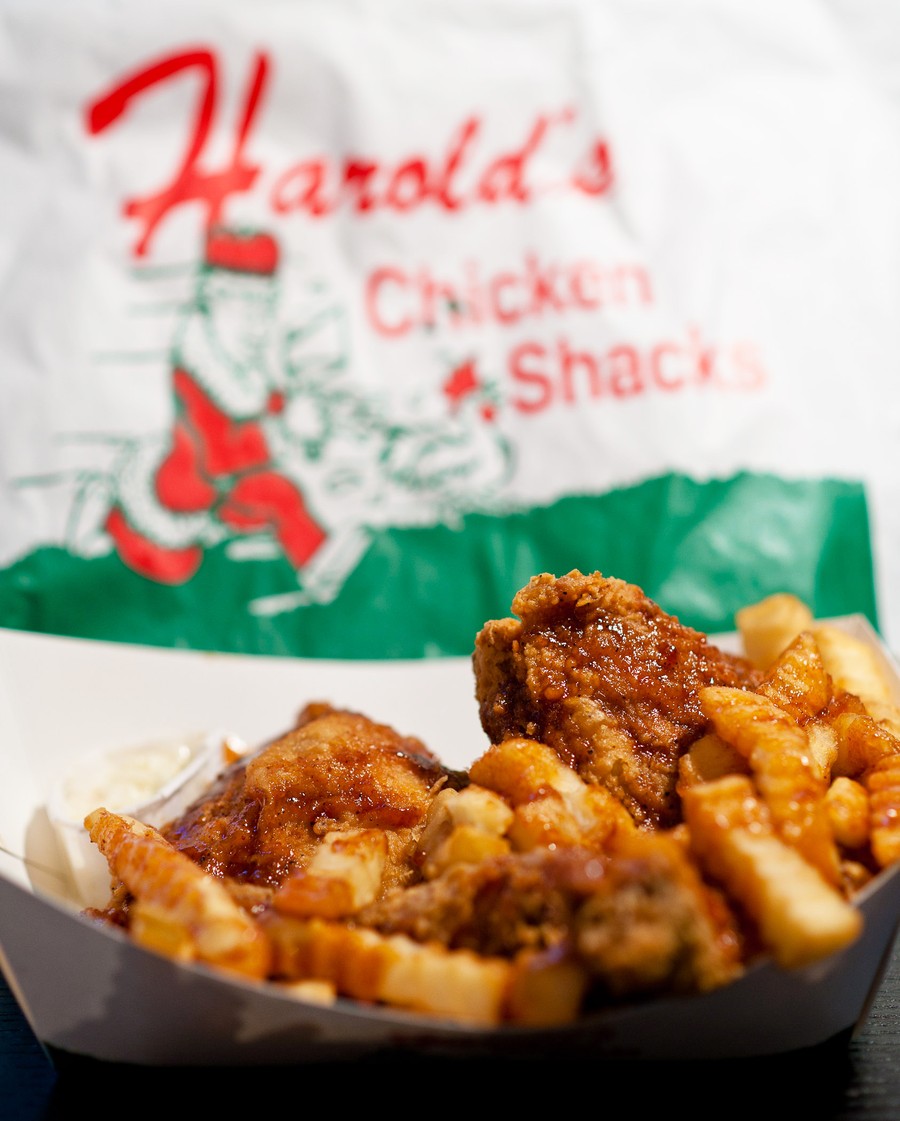 The city of Atlanta—Georgia’s capital—is what W.E.B. DuBois once described as “south of the North, yet north of the South.” Despite being set apart from other Southern metropolises with the nickname “the city too busy to hate,” Atlanta has always been paradoxical—progressive yet also stereotypically behind-the-times, fast-paced while also slow to change. Atlanta’s Southern cuisine, in the same vein, is deeply rooted in Southern history—from antebellum slavery to black-owned soul food restaurants that acted as meeting places for Civil Rights leaders—while also being central to the city’s attempt in what author John T. Edge called “mainstreaming the South,” of presenting “a not-quite-redeemed South, but a fitfully redeemed South—a South kind of reclaiming its history, staring it down, and now reinterpreting it.”

As Atlanta remains one of the most rapidly growing, changing, and gentrifying cities in the last decade, the restaurant entering the fray, positing itself as somewhere in the middle in this cultural shift, is none other than the Chicago South Side’s own Harold’s Chicken Shack.

Harold and Hilda Pierce opened the first Harold’s Chicken Shack in 1950 when they realized that fast food chains avoided opening branches in majority-black neighborhoods. Achieving a local cult following, Harold’s Chicken Shack has long been a bastion of South Side culture, with even Kanye West making his pilgrimage back to the Harold’s on 35th Street earlier this month. Chance the Rapper’s 24th birthday cake had fondant wings and fries dripping in sauce hanging off of it. And even a non-Chicagoan like Kendrick Lamar says he would fly a private jet from Rome to Chicago just for some Harold’s.

While Harold’s Chicken Shacks have long and successfully served black communities in Chicago when nobody else did, it is worth noting that they, and other black-owned businesses, were actively discouraged from expanding to the North Side and white communities. “They’d kick my ass out,” Harold Pierce said in an interview for the Reader.

As years have passed and times have somewhat changed, Harold’s has expanded to the West Loop and Wicker Park. And despite no two Harold’s being the same, they still describe themselves as a “no-frills fried chicken stalwart” or a “no-fuss counter-service institution.” However, the Harold’s Chicken and Ice Bar that opened in June 2012 in Atlanta’s Old Fourth Ward advertises itself as a sports bar and promises a “sit-down environment, complete with a posh cocktail bar and several TV screens.” It was not the Harold’s empire’s only attempt at a sports bar, either: Chicago’s Lincoln Park neighborhood was also once home to Harold’s Bar & Grill before quietly closing in 2014 amid a flurry of negative Yelp reviews.

While the Atlanta Harold’s promises to “maintain the delicious traditional flavors of its Chicago ancestors” and kept all of the fried meat and sauce classics, it also added a full array of alcoholic drinks and dishes like egg rolls, buffalo shrimp, jalapeño poppers, and even salads. And unlike the fast-food methodology of the ones in Chicago, Atlanta’s Harold’s also provides live music and nightlife entertainment featuring local DJs and even karaoke nights. “Harold’s Chicken and Ice Bar” is written in curling white font across the top of the store, which looks more like an upscale boutique than a Shack.

According to recent census data, Brookings Institution researcher William Frey found that Southern metropolitan areas such as Atlanta were increasingly home to middle-class, college-educated black migrants in a phenomenon Frey called a “New Great Migration.” According to Frey, black people were, in general, more likely to move to areas in the South compared to white people. In comparison, the Tribune reported that “Chicago itself lost 181,000 black residents between 2000 and 2010”—mostly to the suburbs where there are “lower taxes, more job opportunities, and maybe better-funded school districts.” Furthermore, Chicago has fallen “from seventh place to 21st in the percentage of black households earning at least $100,000.” It is also worth noting that despite the Atlanta metro area having the “greatest numerical gain in black residents of any city area in the U.S.” in 2015, “Fulton County, the county where most of Atlanta sits, has far fewer black residents than Cook County.”

Still, Frey’s conclusion that this reverse migration of middle-class black folks was evidence of “the South’s economic growth and modernization [and] its improved race relations” is somewhat hasty and lacks nuance when it coincides with the rampant gentrification of Atlanta’s historically black neighborhoods like the one in which Harold’s Chicken and Ice Bar stands. Located in southeast Atlanta, the Old Fourth Ward now boasts the shiny new $4.8 billion Atlanta Beltline, which is set for a 2030 completion date for 22 miles of “modern streetcar,” 33 miles of biking/walking trails, and 2,000 acres of parks. The trail is lined with greenery, public art installations, murals, and new upscale restaurants. The website boasts that the Beltline is “the most comprehensive transportation and economic development effort ever undertaken in the City of Atlanta and among the largest, most wide-ranging urban redevelopment programs currently underway in the United States.”

It was not exaggerating. The Beltline, which is still expanding, has caused the displacement of long-time and low-income Atlanta residents, many of whom are black. The Old Fourth Ward, a historically black neighborhood, is now majority white, and the area’s median income has nearly doubled. Dan Immergluck, an urban studies professor at Georgia State University, predicted that the continuous expansion of the Beltline would lead to the “economic and possibly racial resegregation of the city.”

Perhaps the biggest challenge facing Harold’s Chicken and Ice Bar is catering to these changing demographics and maneuvering within the intersections of race and class. Some new-age Southern restaurants attempt this by advertising themselves as “updated,” with “inventive takes on Southern favorites,” and even “Southern-accented.” The Harold’s Chicken and Ice Bar, while certainly appealing to more well-to-do Atlantans, also advertises the transition to a sit-down Atlanta location as a divergence from the ones that must “[stand] behind bulletproof glass windows (a necessity in light of many Harold’s locations in ‘rough’ neighborhoods in Chicago).”

This deliberate alienation of the South Side of Chicago in the context of burgeoning gentrification is not unfamiliar, nor is it only used in Atlanta. In 2013, Kristen Pierce, the CEO of Harold’s and daughter of Harold Pierce, told the Chicago Sun-Times that she was “trying to eliminate the shack.” While Harold’s locations used to be licensed by individual owners, who could modify the menus and designs all they wanted into what the Sun-Times called “an erratic confederation of restaurants,” Kristen Pierce began opening centralized company-owned locations instead, such as those in Bronzeville, Beverly, and Momence. These boasted bright walls, sleek black tables, and iPads as registers. While these changes are not necessarily unwelcome, Kristen Pierce’s focus on a foundational cultural shift demands closer scrutiny.

Black and brown Atlantans and Chicagoans have been forced to adapt after unwelcome change for decades. In Harold Pierce’s age, it was the process of block-busting in these two cities that devalued properties with or near black residents, forcing them into certain neighborhoods while white residents fled North and to the suburbs, taking their generational wealth and resources with them. Now, it is the threat of affluent residents moving back into the neighborhoods their ancestors deserted, building safe havens for themselves and, inadvertently or not, sending property rates skyrocketing and expelling the ones who’ve lived there for generations. Like the Beltline, the Obama Presidential Center, set to be built in Jackson Park, brings grave concerns as it is coupled with redevelopments of the surrounding park, golf course, and Wooded Island. With equal amounts of tunnel vision, Mayor Rahm Emanuel and Governor Bruce Rauner quietly submitted a bid for the new Amazon headquarters to be built in Chicago. Atlanta, however, is seen as a front runner for the headquarters and its 50,000 jobs.

The change from “Harold’s Chicken Shack” to “Harold’s Chicken” is what Chicago poet Nate Marshall called “Columbus’s flag stuck into a cup of coleslaw.” For some, the word “shack,” he says, “sounds too much like home of poor people, like haven for weary, like building our own.” With two cities buckling under the uncertainties of change, Harold’s Chicken Shack has certainly stood the test of time as a symbol of fortitude and steadfastness, of neighborhoods surviving and flourishing. But when the communities it was built to serve are being pushed out of the city at alarming rates, when the city cannot look the word in the eye and turns its head, it is worth wondering when the burdens of resilience will become too much to bear.