A founder of the Monumental Women Project reflects on the legacy of Dr. Georgiana Rose Simpson. 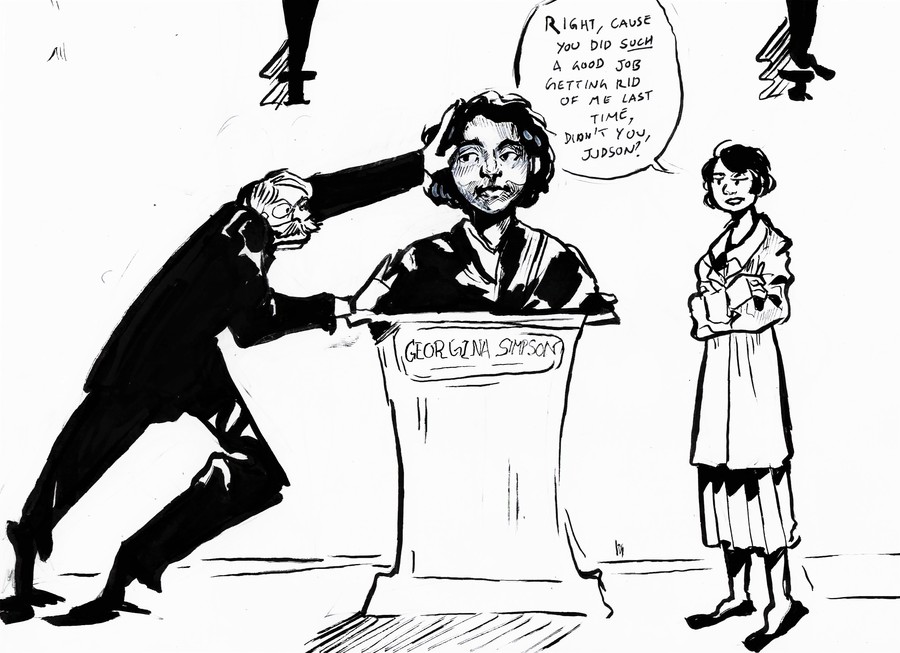 In 1921, Dr. Simpson became one of the first three black women to receive their Ph.D.s in the United States, along with Sadie Tanner Mossell Alexander from the University of Pennsylvania and Eva Beatrice Dykes from Radcliffe College. Dr. Simpson’s bronze bust will be located in the hallway leading up to Mandel Hall, situated directly across from a bronze relief of Harry Pratt Judson, the University president who barred her from living in the dorm called Green Hall while she was pursuing her studies at the University. She will now stand face to face with the man who forbade her and other black students from living in University dorms.

When Simpson arrived at the University of Chicago in 1907, white students protested her presence in the dorms. Even though some administrators, like Dean of Women Marion Talbot and head of Green Hall Sophonisba Breckinridge, fought for Simpson’s right to live on campus comfortably, Judson interfered, forcing Simpson to leave campus housing.

Despite this setback, Simpson continued to complete her studies remotely, through correspondence and through summer coursework, ultimately receiving her historic doctorate degree in German philology from the University of Chicago in 1921.

In her persistent quest to pursue her research in German philology, Dr. Simpson traveled to Germany and ultimately wrote her dissertation on German Romanticism, entitled “Herder's Conception of Das Volk.” She later moved back to her hometown of Washington, D.C., where she first worked as a teacher of modern languages at Dunbar High School before then serving as a professor at Howard University and the secretary-treasurer of the National Association of College Women. After an arduous journey into the predominantly white and male world of academia, Simpson passed away in 1944.

The Simpson bust is an important addition to the University of Chicago’s campus as the first monument honoring a woman for her own unique accomplishments. The Monumental Women Project’s primary goal has been to bring to life a part of the University’s history whose stories were previously untold. For the first time, the University of Chicago will rightfully honor the historic contributions of a woman of color, and, importantly, a woman of color who persisted despite a University president’s efforts to distance her from her education.

As the co-founders of the Monumental Women Project, Shae Omonijo and I came to the agreement that women’s history was unrightfully underrepresented in public art and monuments on campus. There are dozens of busts and sculptures around campus honoring historic male figures, including past University presidents and chairmen of the Board of Trustees, but we kept asking: Where are the stories of influential women? Why were they not being told? There was no doubt that there had been women who made notable and groundbreaking contributions to the UChicago community, but their stories were simply not represented on campus. Public acknowledgement of the accomplishments of black women were even harder to find. With the Monumental Women Project, we wanted to find and share these stories.

Where would the monument be placed? Who would create the piece? How could we, two students who are not familiar with the arts community, go about making this happen? After multiple conversations with Richard Bumstead from the University of Chicago’s Facilities Services, we decided to select Reynolds Club as the appropriate building for the piece. Following a walk-through of the space, we were able to choose the exact permanent location as well—in front of an empty wall between two windows.

The artist selection phase was also challenging, as there are not too many sculptors in the nation who specialize in creating these kinds of bronze pieces. After speaking with some artists over the phone to ask for price quotes for a bronze bust, we began to realize that our initial $9,500 grant from Student Government’s Uncommon Fund would not be sufficient. We then went back to the drawing board and started applying to more grants. Ultimately, we fundraised $50,000 through grants received from the Center for the Study of Race, Politics, and Culture, the Office of the Provost, UChicago Arts, the Center for Leadership and Involvement’s Student Engagement Fund, and Student Government. In addition, we received individual donations from Alpha Kappa Alpha Sorority, Inc. members and an online crowd-funding page. Our increased budget made it possible for us to move forward with our artist, a Chicago-based black sculptor, Preston Jackson. In addition, these funds supported the creation of a wooden pedestal and wall plaque to accompany the piece and the unveiling ceremony event.

This recent national attention on monuments is valuable in that it affirms that public pieces of art have tremendous symbolic influence and importance, but too often, we focus on the drawbacks of bad monuments and not the affirmational possibilities of good ones. Most modern debates about public art of this kind involve the often harmful power of monuments, especially those that glorify figures who achieved historical relevance through bigotry and violence. In an age where we are debating whether or not to remove monuments honoring historic figures who committed heinous acts, we must not forget to fill those same spaces with new monuments that belong. Dr. Georgiana Rose Simpson belongs.

Ultimately, I hope that Dr. Simpson’s bronze bust is the first of many in a wave of public art pieces that honor women and people of color on our campus. I hope the University of Chicago and other university campuses across the nation will pursue initiatives like this one that work to illuminate the accomplishments of underrepresented groups.