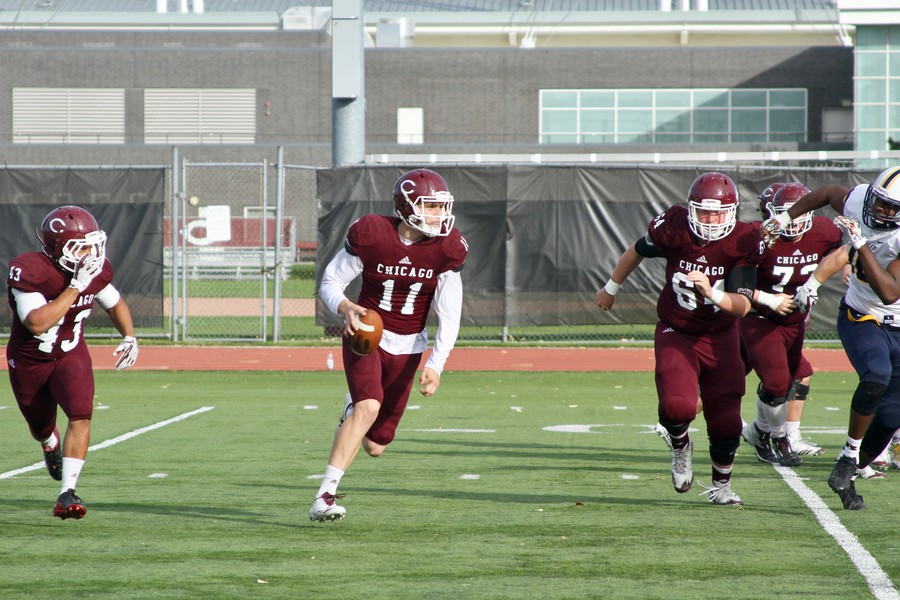 Second-year quarterback Marco Cobian rolls out of the pocket.

The University of Chicago football team will have their last regular season game this Saturday, November 4th, versus the Macalester College Scots. This date will also be Senior Day for the team. The Maroons have eighteen fantastic seniors on their squad. Each of them will be honored as they play their last football game at Stagg Field.

This weekend’s matchup will be quite the challenge for the Maroons, as Macalester has the impressive record of 5–3, with a 3–1 conference record. However, U of C is coming off a great offensive spurt, scoring 91 points in their past two games. Despite losing their last game versus Ripon College, the Maroons scored 22 unanswered points in the middle of the game and made some great defensive plays, including six sacks and three fumble recoveries.

The Scots, on the other hand, were brutally beaten down in their last game by St. Norbert, with a score of 47–7. In this game, Macalester only had 34 rushing yards total, and were sacked on 6 different occasions. It was truly an offensive nightmare for the Scots. If the Maroons can continue their successful offensive run, while improving on any defensive errors, then they will have a good chance at upsetting this opponent.

“We’ve really been working hard and putting all of our effort into practice to prepare for this game,” said second-year kicker Daniel Ducic. “They’re a good team, and the score will be close. But if we come with focus, the game will go well for us. Overall, we are very excited for the last home game this season.”

The previous games between these two teams clearly favor the Maroons. In their last five meetings, the University of Chicago is 5–0 against Macalester. In the most recent game, U of C beat the Scots 24–7 at home. So, despite Macalester having the better overall record, many signs point toward Maroon success this upcoming weekend. Hopefully, this success can give Chicago the momentum to bring home a win at the MWC Championship Week on November 11th.

Overall, the talent of this U of C football team is really shining through this season. Running back Chandler Carroll’s 15 touchdowns are the eight best in all of Division III college football. His 43 career touchdowns are two behind the school’s record, which is held by wide receiver Dee Brizzolara. On the other side of the ball, defensive end Peter Casey leads the conference with 15 tackles for a loss and seven sacks. His seven sacks contribute to the team’s 23 sacks overall, which is second most in the MWC conference.

These players represent the talent and potential of this U of C squad. They clearly have the ability to pull out on top against Macalester college and to achieve a victory during the MWC Championship Week. Come support this Maroon football team at Stagg Field this Saturday at 1 p.m. as they finish off a strong, eventful season.