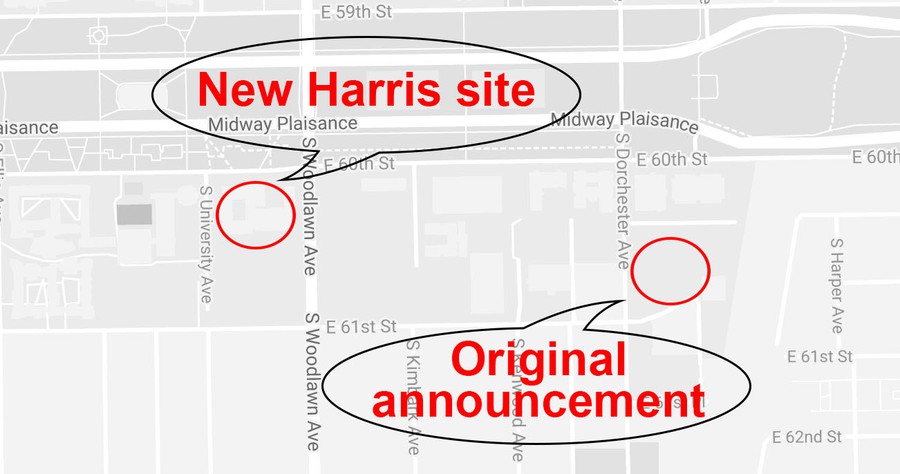 Administrators appear to be considering a large dorm for the site of the Harris School, which is moving to the New Grad building. It's not clear if this means previously announced plans are off for a dorm at 61st and Dorchester.

The University is considering plans for a new 1,254-bed residence hall at 1155 E. 60th Street. The residence hall would be built on the site of the Harris School of Public Policy, to be vacated once the school moves to a new location next year.

The Maroon became aware of these plans when a reporter encountered a PowerPoint presentation for what seems to have been an administration meeting last Wednesday in Booth.

If built as presented, a 170-foot building would line South University Avenue, and three shorter, interconnected buildings would sit along South Woodlawn Avenue and East 61st Street. As revealed on Wednesday, the plans indicate the dorm would be built by a private developer.

In August, the University announced it was in the planning stages for a residence hall further east, at East 61st Street and South Dorchester Avenue.

The Maroon reported in July that the University had notified building owners in this area of its plan to construct a new residence hall. Connie Spreen, executive director of the Experimental Station, explained that the new residence hall would be built on the east side of the street next to the South Campus Chiller Plant.

In an interview with The Maroon earlier this year, President Robert J. Zimmer said he expected to see “a lot” of development between 61st Street and the Midway. The proposed dorm at 61st Street and Dorchester Avenue would sit next to a new 180-room hotel developed by the University in partnership with a national hotelier.

It is not clear whether the University is still considering 61st Street and Dorchester Avenue as a site for a dorm.

In a statement to The Maroon, a University spokesperson said, “The University continues to explore building a new residence hall, as announced in May 2017. We are considering numerous designs and potential locations, but no final decisions have been made. If there is a preliminary internal decision to proceed—which has not yet occurred—there would be many additional steps in the planning, design and approval process, including additional community engagement and publicly sharing any plans that are approved.”